Taikomochi proves a fitting winner of the Kingston Town

The tried and tested ‘bone and muscle’ training methods of Gai Waterhouse and Adrian Bott very fittingly came up trumps in the $160,000, Group 3, ATC Schweppes Kingston Town Stakes (2000m) at Royal Randwick in Sydney when Taikomochi (by Snitzel) scored a clear-cut success.

Trained out of the famed Tulloch Lodge establishment formerly inhabited by the race’s namesake, Taikomochi did what countless Waterhouse-Bott trained gallopers — not to mention Gai’s legendary father T.J. Smith — have done for years when quickening off a very solid middle-distance pace and proving too tough for his opposition over the closing stages.

The early leader of the contest, Taikomochi had no difficulty settling in second place when Wu Gok was sent forward to set the pace in the back straight.

Ridden a perfectly judged race by Tim Clark, Taikomochi regained the lead with 300m to race before galloping through the line in typical Tulloch Lodge fashion to score by a length.

Shared Ambition (Ire) (by Born To Sea) stayed on strongly over the closing stages to claim second, ahead of Brimham Rocks (GB) (by Fastnet Rock) in third.

2020 Australian Derby runner-up Zebrowski (NZ) was virtually in fourth position from start to finish, battling on in the style of a genuine mile-and-a-half performer. 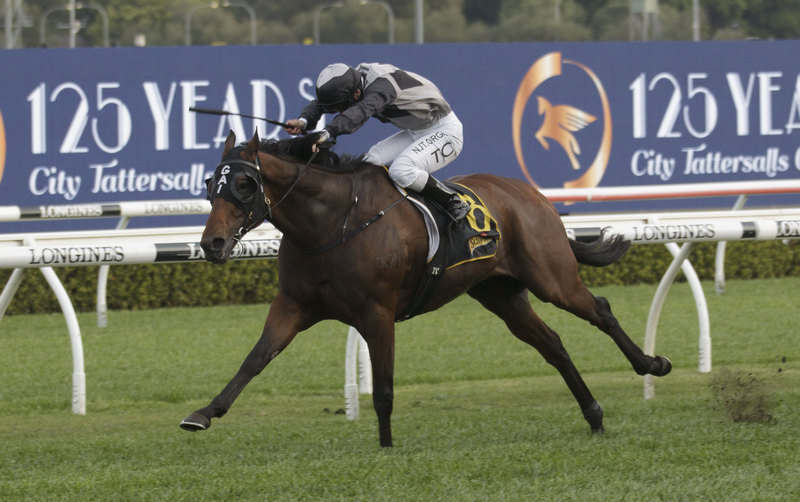 Speaking on behalf of the winning stable, Adrian Bott declared: “So satisfying to see.

“Obviously, [I’ve] so much respect for this horse. What he has achieved in his career. Still to be racing at this level at his age [and] the manner in which he does.

“Such a tough horse. Very satisfying.

“It was the plan to be positive early to control the race,” Bott revealed. “There was some pace in the race. It worked out well for him.

“He looked to let down strongly with something to chase. Very satisfying to see.”

Similarly, winning rider Tim Clark was full of praise for the tough 7-year-old.

“I think that’s the first time I’ve ridden him in a race actually,” Clark observed. “He’s a pleasure to have around and he’s a dude to ride.

“When he gets to the front he drops the bit. So to have something in front of him, it gave him something to aim up at and chase.”

Clark added: “He’s a credit to the stable. He’s a grand old warrior for them and great to see him breakthrough today.

“He’s been around and he just keeps showing up. He’s got a great attitude. I think that helps him a lot.”

Both Bott and Clark were very upbeat about Taikomochi chances in the upcoming The Metropolitan, a race won by Tulloch Lodge many times over. Following the effort, tab.com.au slashed his odds from $51.00 to $26.00 for the staying feature and understandably so.

Margins of the race were 1L x Head.

Tommy Berry (Angel Of Truth): “He was good. Think he probably wants blinkers.”

Glyn Schofield (Danzdanzdance): “Track a little bit firm. She got a long way back.”

Nash Rawiller (Brimham Rocks): “Very honest run. He will be better suited once he gets to the 2400. He ran a really nice race today. Good effort.”

Adam Hyeronimus (Wu Gok): “Went fantastic. Had to do a little bit of work early with a run I wish I didn’t have to do. He is on target for the Metrop.”

Kathy O’Hara (Miss Sentimental): “Her run was OK. She was one paced and felt it late. She will improve with the run.”

Kerrin McEvoy (Mustajeer): “We had to go back from the gate. He will improve with the run.”

James McDonald (Shared Ambition): “Really happy with him. He will be right come game day.”

Brenton Avdulla (Sikandarabad): “I was positive with him. Faced the breeze most of the way. Better off ridden with cover.”

Jim Byrne (Sir Charles Road): “He’s not relaxing. Still on the bridle passing the 700m. Not letting down. Doesn’t switch off.”

Hugh Bowman (Zebrowski): “He ran well. It was a testing race. Thought he acquitted himself well.”

Glen Boss (Girl Tuesday): “She has run well again. Giving away these ridiculous starts. Not taking part early is a bit of a problem.”

Sam Clipperton (Djukon): “Not a bad run. He is probably looking for something a bit easier and a bit further.”