The time away has taken a little longer than usual, but trainer James Peters still hopes Grand Koonta’s outstanding first-up record can put him in good stead for a winning comeback at Kranji this Sunday.

The Irish-bred grey resumes in the $100,000 Kranji Stakes A race over 1200m two months after his unsuccessful Kranji Mile raid in May.

It was the sparingly-raced Dark Angel six-year-old sprinter’s first - and potentially last - 1600m test in 14 starts. The 10th place to Minister was not an abject failure by any means, but is unlikely to tempt Peters into another bite at the cherry anytime soon. 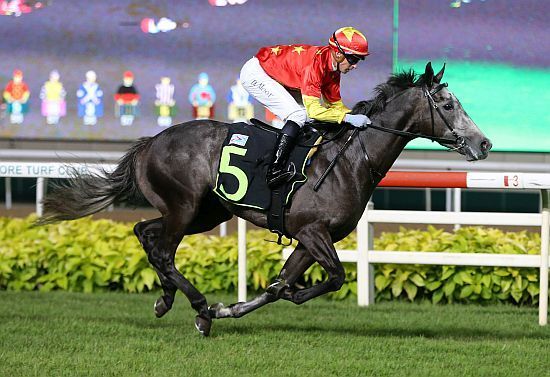 Grand Koonta (Daniel Moor) at the first of his six wins at Kranji on March 1, 2019, picture Singapore Turf Club

“The mile was too far for Grand Koonta. We took a chance but it didn’t work out,” said the English handler.

“He ran around seven lengths off the winner, but it wasn’t too bad. He only ran out of the placings in the last 300m.

“He went for a break. Around three weeks after the Kranji Mile, there was a 1200m race, but in the end, we skipped it as I thought it was too close.

“There wasn’t anything for him after that, though. This race on Sunday is the only option left for him.”

Grand Koonta has been building up nicely on the training tracks for that new preparation, capped by a five-length romp in a barrier trial last Wednesday, with race-rider Vlad Duric in the irons.

Peters would rather wait for Sunday’s race than read too much into the trial, which is after all, just that – a trial.

“He trialled well, but it wasn’t the greatest bunch of horses he beat that day,” he said.

“But all’s good with him. His action was good, he had a nice break, and he likes to go well fresh (all his six wins have come off a let-up).

“I asked Vlad a few weeks back and he was free and happy to take the ride.”

The four-time Singapore champion jockey has sat on Grand Koonta only once from his 14 starts at Kranji. It was in the Group 1 Lion City Cup (1200m) in April in which they worked home solidly for a creditable third to Lim’s Lightning.

Duric then jumped off to steer Top Knight (fifth) in the Kranji Mile to honour a booking he had been committed to way before, but he is now back on, and definitely happy to be reunited.

“He’s in really good form. James has done a wonderful job to bring him back to such good form,” said Duric.

“He trialled brilliantly when he’s not usually a horse that shows much in his trials. It was a low-rated trial, but he still ran time (59.93secs).

“It was a very good trial. If he can bring that trial form Sunday, he’s got a great chance, I reckon.

“I can tell you he trialled a lot better this time round than the trial (picture above) before the Lion City Cup.”

The only query may be the awkward alley in nine, albeit it is less of a worry for horses who can be held up for a run.

“Grand Koonta has not got the best draw. I’ll have to sit down with Vlad and the owners, and come up with a bit of a plan,” said Peters who currently sits midtable on 10 winners this campaign.

“It’s a strong race with lots of pace, and it’s never easy to carry the topweight against many up-and-comers.

“Fame Star and Makkem Lad will set a strong pace, and we’ll then probably settle further back.

“He’s a horse you can settle wherever he is comfortable, anyway. Hopefully, the wide barrier won’t be an issue.”