Sent to post the $5.00 second favourite in a market dominated by the $2.25 first favourite Haut Brion Her, Subpoenaed (NZ) made the price difference an acutely poor error of judgment when delivering a devastating finish in the straight to win ‘going away’ from her 12 opponents.

A fast finishing sixth behind Haut Brion Her at their previous meeting, Subpoenaed (NZ) took a far more forward position on this occasion soon after jumping.

The favourite, on the other hand, appeared to miss the start from an outside barrier and took the length of the back straight to cross to lead.

Though appearing to be traveling well within herself turning for home, Haut Brion Her was quickly overrun by a pack of rivals, which in turn had no answer for the withering late finish of the winner.

Subpoenaed (NZ) crossed the line comfortably in advance of Emeralds (by Sebring) in second and Jen Rules (by Redoute’s Choice) in third. 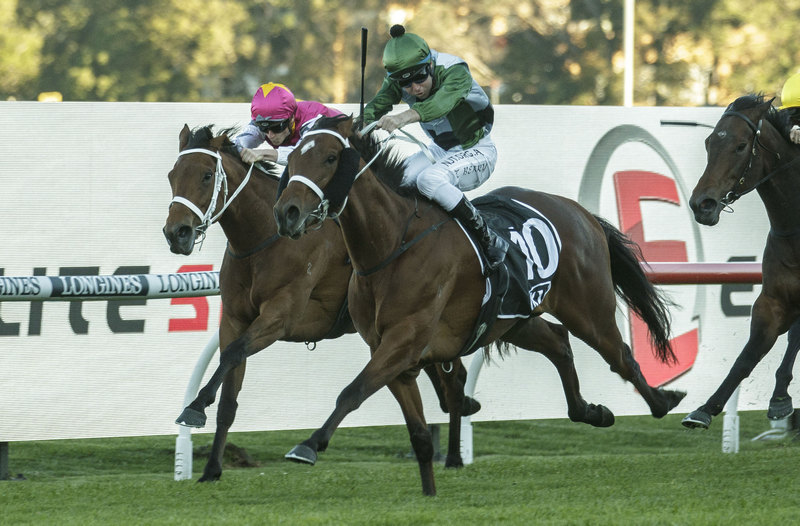 Winning trainer Chris Waller explained the turn around in fortunes of his two runners by stating, “There was good speed on and the barrier draw helped us to be a little bit closer.

“The man of the moment Tommy Berry… he was nice and patient. He pushed the button at the right time. Those leaders just compounded over the concluding stages and she was dominant at the end.”

In regards to the disappointing performance of Haut Brion Her, Waller observed: “There was a lot of pressure early. She couldn’t cross them from 500m after the start. It’s very hard to be doing it like that.

“We’ll freshen her up and find a race for her in three weeks time, maybe back at 1200m. With a bit of luck she can bounce back.”

Conversely, Waller admitted that he hadn’t given too much thought to the winner’s immediate program, but that “A race like the Coolmore in the autumn would be perfect and high on our radar without getting too far ahead of ourselves.”

His second winning ride of the day following victory in the Golden Rose, jockey Tommy Berry suggested that Subpoenaed’s style of racing complicates matters for her supporters.

“I really think people are pretty hard on her for her racing style because it’s not in any means her way of racing,” said Berry after the win.

“It’s just drawing bad barriers with her. She actually hasn’t got the speed to put herself on the speed, so when you draw 16 you’ve got to be midfield [and] wide or we just go back.

“It’s not really her racing style. Every time she’s drawn [well] we’ve been able to have her midfield like she was today, because she actually jumps quite well but we just grab her straightaway and snag her back.

“So it has more been us not her, but we drew well today and we were able to put her in the right spot.”

Berry closed: “It’s been a while since I won on her. Thanks to the owners who have stuck loyal with me because she’s been frustrating at times, but it was nice to get the win on the board today.”

Her 15 starts have reaped four wins and four placings for $422,652 earnings, though the Golden Pendant was her maiden black-type victory.

Tim Clark (Shout The Bar): “She made nice improvement and will be bang on over a mile.”

Josh Parr (Positive Peace): “Didn’t have the speed we expected early. She was very strong late. Didn’t have any luck.”

Nash Rawiller (Sweet Deal): “She has had a couple of hard runs lately. Taken its toll a bit.”

Rachel King (Outback Barbie): “She was good. Definite improvement on her first up run.”

Sam Clipperton (Jen Rules): “Terrific run. She was just a little slow away. Settled a little bit further back than I wanted. She ripped home well.”

Brenton Avdulla (Adelong): “She over travelled at the seven.”

Regan Bayliss (Akari): “Good run. She’s ticking over nicely. Third up next start in a race she should run well.”

Jason Collett (Emeralds): “Great run. Positioned nicely after being flat footed when they quickened. Was strong through the line.”

Kathy O’Hara (Air To Air): “Was OK. Just wanted to fight me in the early stages.”