Strong N Smart back to his best

Former handy three-year-old Strong N Smart bounced back to his best form with an explosive last-to-first win at Kranji on Saturday.

Things, however, looked hairy for the $8 hotpot at the top of the straight when he cornered into the back of a fortress of horses, but as he found clean air on the outside of Buraaq (Oscar Chavez), a run to the judge quickly unfolded, and it soon became just a matter of when the Leslie Khoo-trained son of Per Incanto would sail home.

The well-backed Royalty (Koh Tech Huat) had every chance when he struck the front in the straight, but had no answer to Strong N Smart’s burst. One length split them in the photo with the same margin holding Eagle Eye (Hakim Kamaruddin) in third spot. 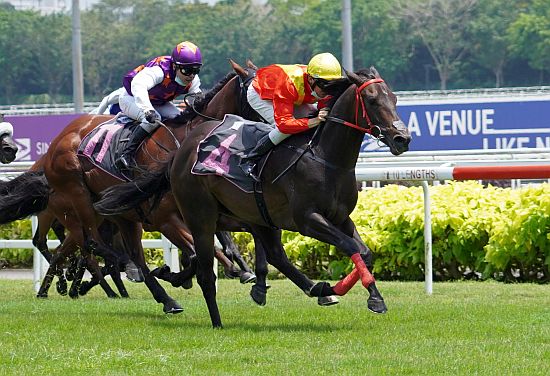 The facetious Singaporean handler couldn’t help himself to a bit of colourful language in describing his state of mind at the point of the turn.

“But Danny (Beasley) rode a very patient race. The gap came up and the Long Course also helped.”

Khoo said the short break after Strong N Smart’s unplaced run in the Group 3 Singapore Three-Year-Old Sprint (1200m) in June has helped furnish him out into a stronger individual.

“He’s come back stronger after the break. I’ve been building him up, he had a nice quiet trial two weeks ago,” he said.

Though all three victories have come in six-furlong turf races, Khoo said he would like to step him up over more ground.