In three decades of the Cartier Awards no stayer has ever been named Europe's Horse of the Year but, should Stradivarius complete a second 'perfect season' with victory in the Long Distance Cup, Bjorn Nielsen's tough stayer might overhaul evergreen stablemate Enable this year. 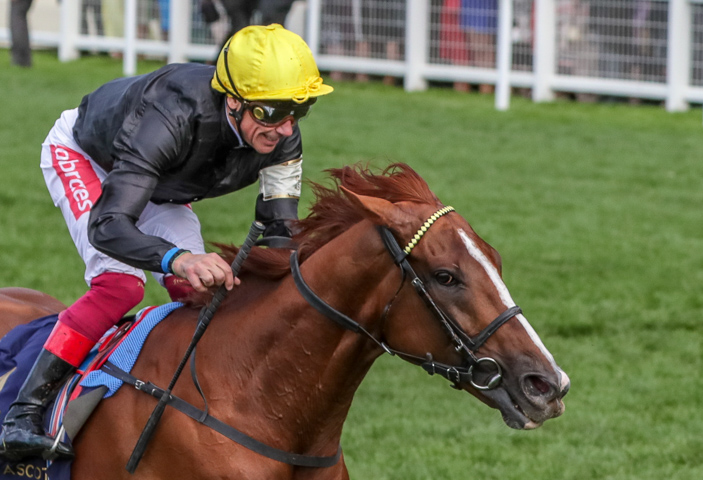 For that to happen, trainer John Gosden must be satisfied that Ascot's much-discussed inner track has not become too testing for Stradivarius, who has the turn of foot of a middle-distance performer and is not seen to best effect when conditions turn heavy.

Both Nielsen and Gosden will want to run – as they did in similar circumstances 12 months ago – while Frankie Dettori will not need asking twice about the prospect of being reunited with Stradivarius, who comes here on a ten-race unbeaten streak.

"Stradivarius has had a good season, during which time his five races have been well spaced out," said Gosden. "He seems in good form at home and we've always planned another crack at this.

"I'm not conversant with the inner track but I'll walk it before racing with Mr Nielsen and make a call about his participation."

Of his eight rivals, five present a new challenge to Stradivarius, having never raced against him before. Cleonte and Capri have each finished on the wrong end of the result on a single occasion, while Max Dynamite is a serial victim with four defeats to Stradivarius.

Gosden also fields the lightly-raced Royal Line, winner of the November Handicap at the end of last season.

Gosden added: "Royal Line won the September Stakes well last time and although he is unproven at the trip, he always shapes as if he'll get it as he finishes his races off so well. He likes soft ground which is another positive."

Aidan O'Brien has kept last season's Grand Prix de Paris and St Leger winner at trips just shy of where he could cross swords with Stradivarius in three starts this season, and arguably only Dee Ex Bee boasts similar credentials at middle-distances among the horses John Gosden's star stayer has confronted.

Although he has been beaten on all three starts this year, Kew Gardens was runner-up in the Coronation Cup at Epsom and then shaped well behind the enterprisingly-ridden Search For A Song at the Curragh on his return to action last month.

"Kew Gardens ran a great race in the Irish St Leger and we're delighted with how he came out of that," said O'Brien. "That was his first start for a long time and he's pleased us since. He seems to be in very good form and the better the ground, the more it’ll suit him."

Stablemate Capri beat Stradivarius in the 2017 St Leger, but was a well-beaten eighth in the Gold Cup here in June.

O'Brien said: "Things haven't worked out for Capri on his last two starts, the circumstances of the race just didn’t really suit him. We think he’s a lot better than those runs and we think and hope he’ll leave that form behind him."

What the rest say

Saeed bin Suroor, trainer of Bin Battuta
We feel that Bin Battuta has a chance of staying this distance and he has being going well at home since winning at Chelmsford. He has never raced on this type of ground so we will have to see how he copes with it.

Andrew Balding, trainer of Cleonte
He was disappointing in France but has come out of it well. He has run some really good races this year, and it's a similar scenario to Doncaster. We’re hoping to nick a place.

Willie Mullins, trainer of Max Dynamite
He has it all to do and we'd be delighted if he could get into the first four.

Philip Newton, owner-breeder of Mekong
He is effective on everything. He goes on fast ground and he has shown that he can go on soft ground as well, while he has been very lightly raced this year.

Roger Charlton, trainer of Withhold
I think there will be an awful lot of people at Ascot who will have never seen him in the flesh. He's a magnificent beast of a horse and I'm hoping he will be around next year, when I'm looking forward to running him in the Cup races. Stradivarius has won ten races in a row and is phenomenal. He should win, but if we are second, third or fourth to him I will be thrilled.