Blue Heaven Farm’s Starship Jubilee was the oldest starter and only mare in Saturday’s $1 million Ricoh Woodbine Mile (Grade 1), but a youthful late stride and an abundance of girl power combined to deliver a stirring score for Canada’s reigning Horse of the Year.

Trained by Kevin Attard and ridden by Justin Stein, seven-year-old Starship Jubilee, a multiple graded stakes winner and multiple Sovereign Award champion, came into the 24th edition of the fall turf classic somewhat under the radar.

On a cool, crisp day at Woodbine, the now 19-time winner landed in the winner’s circle, besting a talented group of rivals, including 2019 Preakness Stakes champ War of Will and multiple graded stakes victor March to the Arch.

With the Ricoh Woodbine Mile part of the Breeders’ Cup ‘Win and You’re In’ program, the Florida-bred has earned a fees-paid berth into the Grade 1, $2 million Breeders’ Cup FanDuel Mile Presented by PDJF at Keeneland Race Course on November 7.

Sent off at nearly 6-1, the daughter of Indy Wind sat fourth through an opening-quarter mile reached in :23.66 over a “firm” E.P. Taylor Turf Course, as Admiralty Pier and Value Proposition led the eight-horse field. War of Will, who arrived at the Mile off a nose nod in the Grade 1 Maker’s Mark Mile, was fifth, just to the outside of Starship Jubilee.

The two pacesetters continued to call the shots through a half-mile in :46.14, as Stein maintained a patient hand on Starship Jubilee, who was flanked by War of Will.

As the field turned for home and passed three-quarters in 1:09.12, Stein searched for racing room and was able to find a seam to engage the front-runners, with Rafael Hernandez asking 2-1 favourite War of Will, and Patrick Husbands urging March to the Arch for their best turns of foot.

Second and quickly gaining at track announcer Robert Geller’s stretch call, Starship Jubilee soon seized control and powered home a confident winner, one length ahead of March to the Arch, with War of Will a further three-quarters of a length back in third. Olympic Runner was a head back in fourth to complete a 2-3-4 finish for trainer Mark Casse. Armistice Day, Admiralty Pier, Shirl’s Speight and Value Proposition completed the order of finish. 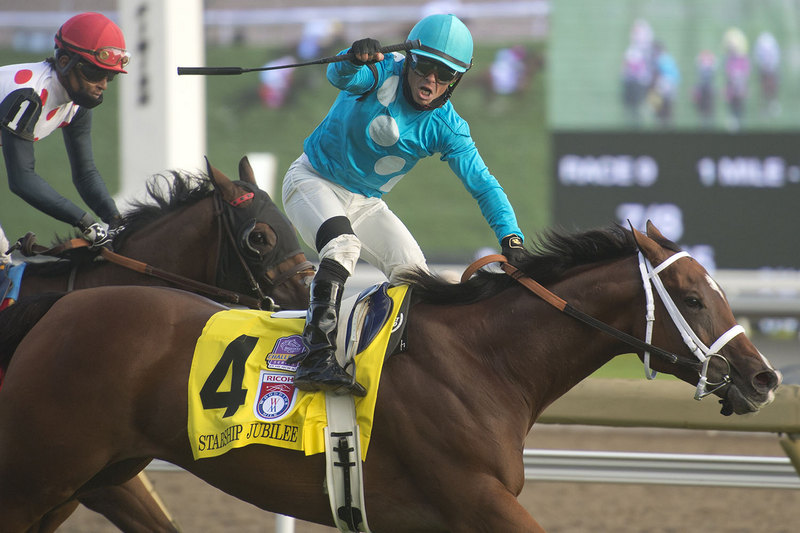 “Sitting inside the three-eighths pole, around the 5/16ths pole I had tons, and I waited for a chance to tip her out and ask her to run,” said Stein, when asked at which point in the race he thought he was going to win. “She's so honest and wants to win more than anybody else out there. I watched her replays… she's just gritty. She just waited for her cue and took off like a scalded cat. She was gone.”

Starship Jubilee became the third filly to win the Mile.

In five starts previous this year, Starship Jubilee, bred in Florida by William Sorren, won her first four outings before finishing fourth in the Diana (G1) at Saratoga on August 23.

Today, she was at the top of her game and surpassed the $2 million mark in career earnings.

“Just an unbelievable feeling,” said an emotional Attard. “This mare doesn't get the respect she deserves. She's a winner of 18 or 19 races out of 38 starts, I was really disappointed to see her at 6-1 on the board... just kind of forgotten about. Time after time, she comes up and proves that she's a top horse in North America.”

“I paid attention to what other people had said,” said Stein, who is currently holding a slim lead for most wins in the Woodbine riding colony. “I expected War of Will to be up there. Instead he was on my flank and we were in company down the backside, and Shirl's Speight was up there and Admiralty Pier. It kind of shaped the way I thought. I was in great position and I was just happy with the trip I got."

The bay was claimed for $16,000 on Attard’s behalf by his father and fellow trainer, Tino Attard, at Gulfstream in February 2017.

Now, she’s likely headed to the starting gate for a shot at Breeders’ Cup glory with a rider who had retired, but made the decision to get back in the saddle.

No need to ask if he has any regrets about his comeback.

"It's pretty special,” admitted Stein. “Life's funny; I had an opportunity to come back and I've just kind of seized the day and I keep going."

“I'm just going to enjoy the moment right now, but it's obviously a special feeling to know that this race has produced so many horses that have gone on to win the Breeders' Cup,” offered Attard. “So, I'm really ecstatic right now and that's somewhere we've been aiming to go all year long. This is just one step closer.”

Jockeys riding in the Mile wore black arms bands in tribute of legendary jockey Pat Smullen. The Irish-born champion rider passed away from pancreatic cancer on September 15 at the age of 43.

The Grade 1 Ricoh Woodbine Mile, which was contested as the ninth race on Saturday's program, generated a record handle of $3,098,339 for the race.