Star Jack gets down to business after pre-race antics

Dyed-in-the-wool stayer Star Jack gave connections a pre-start scare, but was still able to bounce back to his best in the $50,000 Class 4 race over 2000m at Kranji on Saturday.

Trainer Hideyuki Takaoka thought all his long-haul planning towards that rare 1 ¼ mile race for Class 4 gallopers had gone up in smoke all because of one unpredictable quirk only horses, even the most placid, are known for.

On the way to the start, the Jungle Pocket seven-year-old decided he wanted to have a bit of fun when he “jacked” around without warning, dumping jockey Wong Chin Chuen to continue on his merry way riderless. 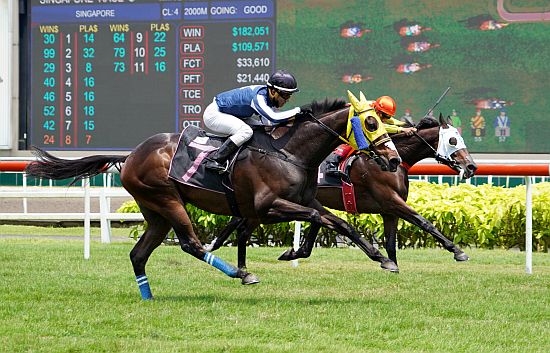 “I thought ‘gone’, when he kept going without jockey, sure he’ll be scratched,” said Takaoka.

The loose horse’s moment of freedom was luckily brief after he was caught shortly after, and passed fit to race. Wong escaped just as unscathed, except for a bit of wounded pride.

But Star Jack was quickly forgiven for his mischief two minutes later when he burst through the pack to carry Wong to a brilliant three-quarter length win from Gold Reward (A’Isisuhairi Kasim) with Sky Rocket (Marc Lerner) third another 2 ½ lengths away.

Ahead of only one runner, King’s Speech (Iskandar Rosman), throughout the stamina test, Star Jack, easy to spot in his conspicuous yellow earmuffs, was actually only around five lengths off leader Gold Reward in a very compact field.

The $42 shot still had to weave his way around traffic upon straightening, but an opening on the outside of the weakening Luck Of Master (Oscar Chavez) went a long way in setting him alight towards his return to the winner’s circle – a fifth in 36 starts for stakes earnings fast approaching the quarter of a million mark for the Star Jack Stable.

Star Jack has now recorded all his wins from 1800m and above, with three coming in 2000m events.

Takaoka has always rued the lack of staying races for the Japanese-owned gelding, a state of affairs that has seen his ratings plummet from the 80s into 53 in the space of two years.

At the height of his career two years ago, he ran second to I’m Incredible in the Group 3 El Dorado Classic (2000m) but the Japanese-bred didn’t progress to the next level thereafter.

“No, he doesn’t have enough points to go to the Gold Cup,” said the Singapore Gold Cup guru who boasts four wins in the blue riband.

“Last year, he even ran in the QEII Cup (Group 1 Queen Elizabeth Cup over 1800m won by Top Knight), but he was not up to that level.

“He’s just a Class 4 horse but he needs long distance races. I was actually happy with his last few runs as he showed he had come back to form, even if as a roarer, you never know – sometimes, he runs good, sometimes he runs bad.

“CC rode him well at his last start (closing fifth to Real Efecto in a Class 4 race over 1800m on September 11), I kept him on and he rode him very well again. He switched him off at the back and from the 400m, he got him into the race and the horse quickened very well.”