Exciting US-bred sprinter Fame Star looks set to shine in the $100,000 Class 1 Polytrack race over 1200m as racing returns at Kranji on July 11.

From the 17 entries, the Group 2 EW Barker Trophy (1400m) winner seems to be the one with the speed angle. Eight of them are more middle-distance performers while among the sprinters, only Altair and maybe Nowyousee can rival with him in the early stages.

But Fame Star, who has won the bulk of his eight races by making his own luck in front, should on paper dictate terms in the highlight of that bumper 14-race edition of that first post-Circuit Breaker meeting. 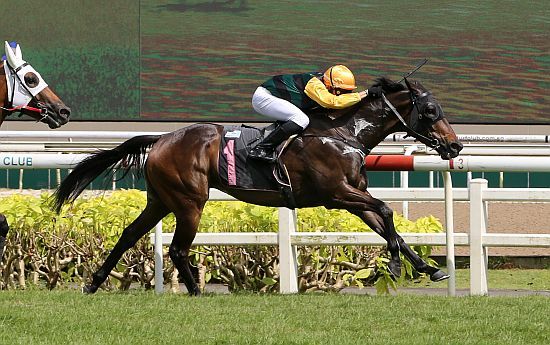 With only 55kgs on his back, the Twirling Candy five-year-old will be hard to toss in the home straight, but trainer John O’Hara is not counting his chickens.

“I’m happy with his condition, even if he is not 100%. He could be fitter,” said the Singaporean handler.

“The long time off probably did not help – he won first-up from a break, but then had to go for another break (during the Circuit Breaker). But that’s the way it is, we had to back our horses off like all the other trainers.

“The break has actually done him a lot of good. I can only hope he will be fit enough to win on raceday.”

O’Hara said he would have preferred a second barrier trial to blow away those cobwebs further, but given the relatively short notice to the relaunch of racing, he will make do with one.

“I wished he could have had two trials, but they would have been too close to each other before the race,” he said.

“I was happy with his trial last week. (Race-rider) Marc (Lerner) gave him an easy time and he ran a nice second.”

Not the best away, Fame Star slid up within his own steam to the outside of leader Skywalk (Vlad Duric) mid-trial, kept on the bridle through the line as he edged to the front before a hard-ridden Augustus flashed past him late.

“He will go forward, that is his racing pattern. Hopefully, he draws a good barrier,” he said.

“Marc will ride him. He knows the horse well now and he said he can make the weight.”

The French jockey took over suspended champion apprentice jockey Simon Kok Wei Hoong (who reeled off a four-in-a-row on Fame Star last year) at the right moment. It came in November’s EW Barker Trophy and he has stayed on since for a perfect two-from-two record. At his first-up run on February 15 this year, Fame Star was again uncatchable in a Kranji Stakes A race over 1200m.

On the same day as Fame Star returns, O’Hara will throw in a newcomer who also races in the Toast Trusts colours, Proof Perfect, a former three-time winner in short sprints in Queensland.

“Proof Perfect is not a bad horse. He has shown ability in his work,” said O’Hara.

“He trialled pretty good, but I think he needs a bit more time to acclimatise.”

O’Hara went through a quiet start to the 2020 season before the COVID-19 suspension came about, having saddled only three winners. He is ahead of Kuah Cheng Tee (two winners), Tim Fitzsimmons (one winner) and Saimee Jumaat, who has yet to open his 2020 account.