Standoff gets off the mark with smart maiden success

Twenty-five to one outsider Standoff (by Smart Missile) belied her all too easily dismissed chances of landing the $100,000 VRC Schweppes Bagotville Trophy (1100m) at Flemington in Melbourne when storming home over the closing stages to open up her winning account with an impressive performance of genuine promise.

A lightly-raced 2-year-old having only her second start in a race, the grey daughter of Smart Missile had only been beaten a matter of three-lengths at Moonee Valley last December on debut, and had clearly come-on from the experience in the interim when posting a very handy win.

Ridden to victory by Dwayne Dunn, the Grant & Peter Dalziel trained juvenile had been buried away in the pack in the 13-horse affair for much of the assignment, before bursting into the lead with approximately 150m to race and running right through the line for a smart victory.

Similarly, runner-up Sunshines (by Akeed Mofeed) did all of her best work at the finish, after racing just behind the speed for the majority of the contest. Having only her second career start just as the winner, the Akeed Mofeed (Ire) filly turned in an equally handy effort to take second — also out-performing her double-figure odds.

After racing prominently from the off, race favourite Zesty Belle (by Denman) boxed on gamely over the closing stages to hold on to the minor placing. 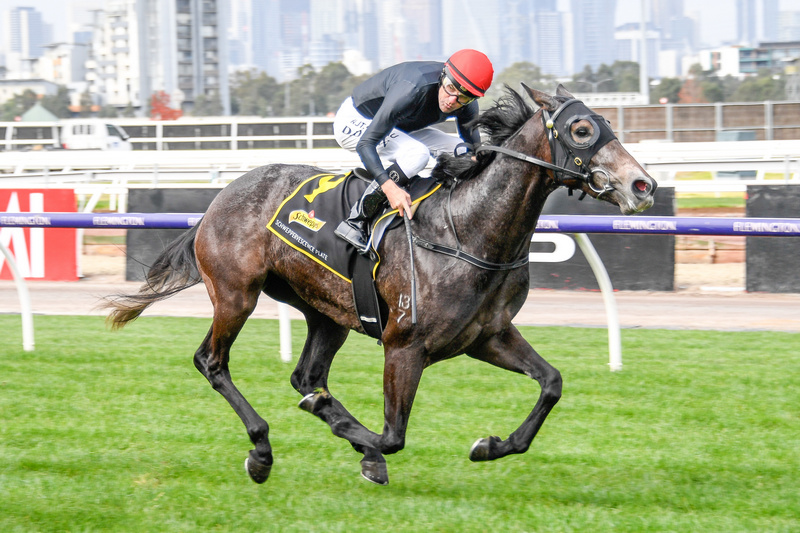 Speaking after the win, successful jockey Dwayne Dunn indicated that the win should not have come as too much of a surprise despite the filly's odds.

“She ran terrific at her first start at The Valley,” explained Dunn. “Slow away, wide at the corner and found the line nicely. She’d since trialled up well, so it wasn’t a shock to anyone at the stable to see what we saw today.

“She looks immature in the yard and she’s doing everything on natural ability, which is fantastic.

“I think she’ll get further. I had to come back at the 300 and get to the inside to get some clear room. She had a turn-of-foot and acceleration. And, as I said, when you look at her in the yard, she looks more like a yearling than a two-year-old.

“So with her natural ability, hopefully everything else falls into place.”

Speaking on behalf of the winning stable, co-trainer Grant Dalziel stated with a degree of satisfaction: “She goes good. We’ve known that. Even her run at The Valley was good. You won’t get that [30-1] again.”

In reference to winning the race with Dwayne Dunn in the saddle, Dalziel remarked: “He hasn’t ridden for me since, probably, before he went to Hong Kong. I used to take a few horses to Adelaide and we had a couple which won Listed Races, and he used to ride for me over there. This is our first catch-up in a long time.”

In terms of Standoff and her longer-term program, Dalziel observed: “She’s very immature. We’ll go back to the Magic Millions for $1,000,000 restricted races.”

Standoff was officially returned at a starting price of $26.00. Runner-up Sunshines was sent to post at $16.00, and the minor placegetter Zesty Belle at $4.60.

If anything, the winner Standoff was born to be a prominent performer down the Flemington straight. The filly essentially gets her grey colouring from a celebrated female line which features a succession of notable performers, including Truly Believe, Convent and most notably Pure of Heart (4th-dam), a daughter of the near-white dual-hemisphere serving stallion Godswalk (USA) that was one of the very finest sprinters of her day.