The ninth meeting of the 2020 Dubai World Cup Carnival at Meydan on Thursday evening is a bumper eight-race card sponsored by pillar partner Mohammed bin Rashid Al Maktoum City—District One and highlighted by the $300,000 Group 3 Nad Al Sheba Trophy, $100,000 Group 1 Al Maktoum Challenge R3 for the Purebred Arabians and a pair of Listed races.

Leading the ratings is Team Valor’s David Simcock-trained Spanish Mission, who has impressed in his morning exercises since arriving two weeks ago. A smart winner of the $1 million Jockey Club Derby at Belmont Park in September, he has been aimed toward Dubai since and appears a promising type for 2400-3200m, which is why his connections hope a good performance will springboard him into either the Group 1 $6 million Longines Dubai Sheema Classic over 2410m or Group 2 $1.5 million Dubai Gold Cup sponsored by Al Tayer Motors over 3200m on Dubai World Cup night. 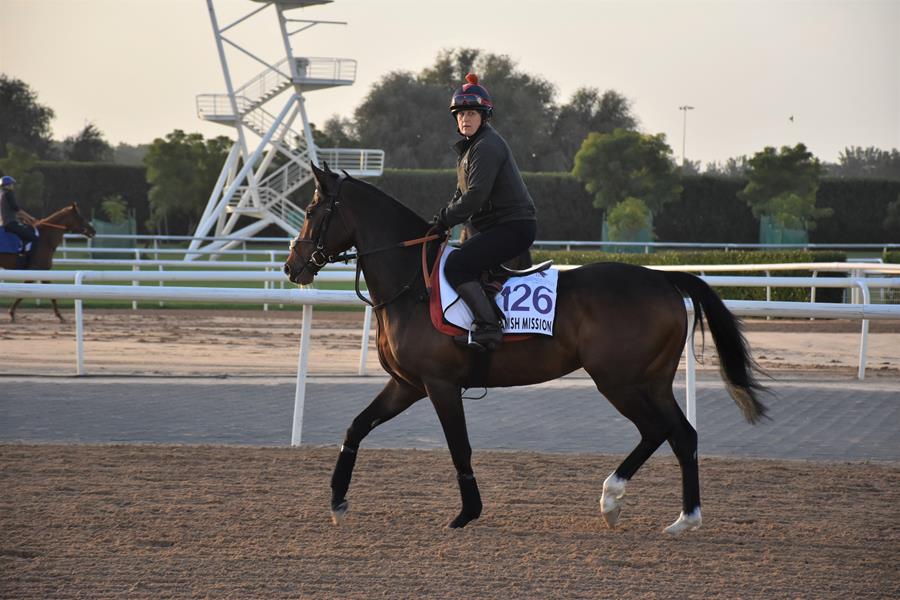 Godolphin look particularly well represented in the 2810m Group 3 Nad Al Sheba Trophy sponsored by Mohammed bin Rashid Al Maktoum City-District One and are responsible for five of the nine runners in the turf feature. For Charlie Appleby, who has won the two most recent renewals of this race, Secret Advisor landed the Listed Meydan Cup, a handicap over this 2810m turf course and distance in a thrilling finish from stable companion Dubhe, who was third. The pair divided by the same owner’s Dubai Horizon, saddled by Saeed bin Suroor. All three are back in action with Bin Suroor, the most successful trainer in the history of a race inaugurated in 2010 with four winners, also saddling Gifts Of Gold and Dubai Future. The latter won a 2410m handicap earlier this DWC Carnival.

“Dubai Horizon ran very well in the Meydan Trophy, but not so well on his second start, so we are hoping the step back up in trip is in his favour,” Bin Suroor said. “We are looking forward to running Gifts of Gold over this longer trip as it should suit him. After winning well, Dubai Future was then a bit disappointing.”

Of his pair, Appleby said: “Secret Advisor had been off a while before the Meydan Trophy, so we were delighted with his win. He must have a big chance, while Dubhe will appreciate a good gallop, as he is just a dour stayer.”

The $175,000 Curlin Stakes (Listed Handicap) over the same 2000m on dirt as the Dubai World Cup looks particularly open among its dozen runners. The weights are headed by Ambassadorial, trained in Britain by Australian Jane Chepple-Hyam, who also owns the 6-year-old globetrotter. His local debut was an excellent second, over 1600m on dirt, in a handicap when caught close home by the exciting Midnight Sands. He was then fourth over the same 1600m in the Group 3 Firebreak Stakes won by Dubai World Cup hopeful Capezzano. With regular jockey John Egan suspended, his son David takes over in the saddle for what will be his UAE debut on a horse tackling the longest trip he has faced to date.

American Parsimony has Dubai World Cup dreams to satiate in this spot, but must improve from a fourth-place finish after setting a hot pace in a January 2000m handicap. That day he drew the rail post, but this time is much more comfortably situated in barrier five and picks up the noteworthy services of William Buick.

Red Cactus must be respected, as he should not be bothered by his post 12, being a deep closer, and always appears to give his best. Winner of the Swedish Derby over 2050m, he was an unlucky second, just missing in the final jump in 1800m turf company last out. Carlos Lopez returns to ride again.

The $175,000 Meydan Classic (Listed) for Sophomore turf specialists drew 14, topped by Charlie Appleby-trained multiple G3-placed and Listed winner Well of Wisdom, who was eight last out in the 1400m trial for this event, but is well worth a long look on class in this position. Fourth in that 1400m trial was I Will Not for Doug O’Neill, but subsequently just a week later, only seventh in the 1900m Meydan Trophy, also on turf. A cut back in trip appears worth a note. Lost in Time is one who has long been well-regarded by Saeed bin Suroor, but yet to show his best stuff in Dubai. A return to form would not be a surprise for the well-bred son of Dubawi who gets the services of Christophe Soumillon.

Purebred Arabians take the stage in the Group 1 Al Maktoum Challenge R3 sponsored by Mohammed bin Rashid Al Maktoum City-District One, which will have a new name on the trophy this year after 2019 victor AF Maher was not declared. His connections, Khalid Khalifa Al Nabooda, Ernst Oertel and Tadhg O’Shea instead rely on AF Al Sajanjle, whose most recent victory was registered last February in the 1600m Group 2 Mazrat Al Ruwayah, chased home by Cheik Roque. The latter filled the same position in the Group 1 Al Maktoum Challenge R1 in January this year, over the same 1600m on the Meydan dirt surface.

Mickael Barzalona makes a rare local Purebred Arabian appearance on local debutant Shahm, a horse on whom he has won a Group 1 in France, for Majed Al Jahoori and Al Wathba Racing. Doug Watson introduces a Grade 1 winner from the USA, RB Texas Hold Em, a hard-trying type who should have a big say in the outcome if his form transfers across the Atlantic. Harrab, another Al Wathba Racing and Al Jahoori offering, Goshawke and the enigmatic Mawahib, trained by Eric Lemartinel for HH Sheikh Khalifa bin Zayed Al Nahyan, are others to consider in a fascinating renewal.

The evening’s fourth race, the $135,000 District One Blueviews Stretch Handicap, could offer up a spot in the $1.5 million Godolphin Mile if one of its many contenders breaks through with a top performance. William Buick gets the ride on another Doug O’Neill trainee in Fight On, who comes off a poor performance in the Firebreak (G3) last month, but has the back-class to factor here at top weight. Joining him at 60kgs and a 104 rating is Swedish warrior Plata O Plomo, who defeated the American at this trip on Jan. 30 and appears well-spotted for Susanne Berneklint.