Four days after becoming only the second trainer in Hong Kong history to saddle 1,400 winners, John Size regained the lead in the 2021/22 trainers’ championship from Frankie Lor with a treble at a drenched Sha Tin on Sunday afternoon. 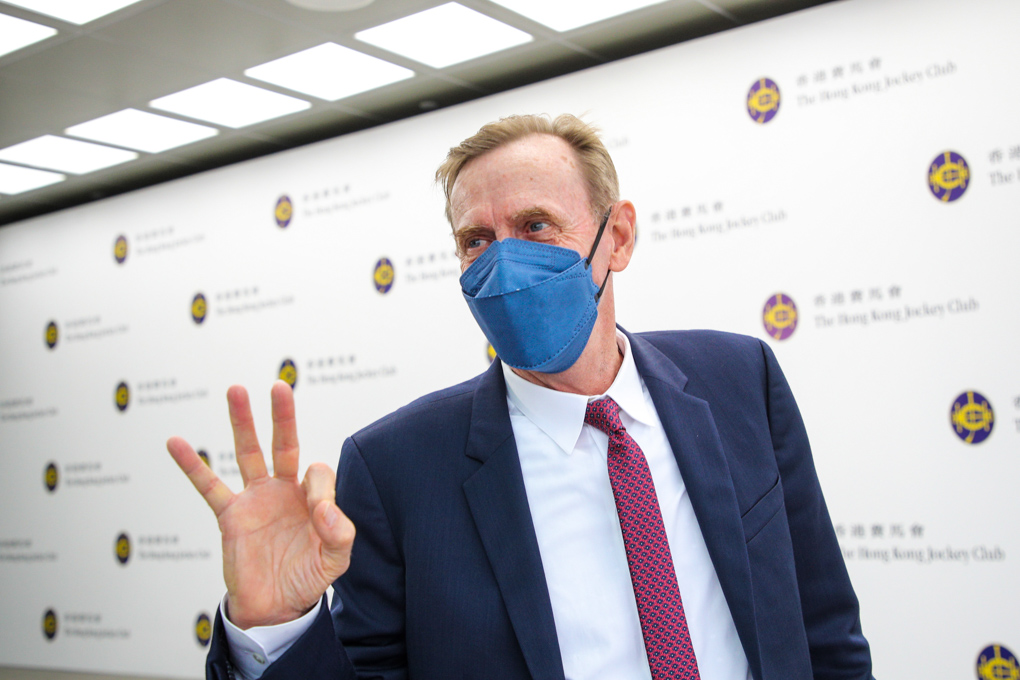 “It’s not a very comfortable lead, I’d have to say, and we’ve still got 17 meetings to go. Frankie is doing a very good job, as I would always expect him to do when he got in this position. He’s going to try very hard to secure the championship, I’m sure,” said Size, who is the only horseman along with John Moore (1,735 wins) to post 1,400 winners or more in Hong Kong.

“A bit similar to the last time I had treble here, the track conditions (good to yielding) played in my favour. The horses were suited by the ground, they got in a position where they could win from and like everything else in racing, you need a bit of luck and they got their good fortune and they were able to win.”

Sporting pacifiers, the grey landed his fourth win in Hong Kong, adding dirt track success to two wins at Happy Valley and another on Sha Tin’s turf surface before Size added to his haul when Escape Route stormed down the outside rail under Teetan to clinch the Class 3 Devon Handicap (1400m).

Following the adventurous example set by Blake Shinn early in the programme, Badel piloted Brilliant Way down the grandstand side of the course to cement Size’s three-timer with a gritty win in the Class 3 Cornwall Handicap (1200m).

Caspar Fownes hailed Shinn’s tactical acumen after the Australian angled to the outside fence before claiming the Class 2 Alnwick Handicap (1600m), the afternoon’s feature contest, aboard The Rock.

“It was a good ride by Blake Shinn, well done to him. He did his homework, he came here earlier today and he walked the track and he felt it might be a little bit better on the outside, so he's made that decision and I supported that,” Fownes said of Shinn, who will return to Australia at the end of the season.

“I said 'You go for it, I'll respect your decision' and I'm very happy that he got the job done. I'm very happy for Blake, he's riding extremely well and we're going to miss him next season. We hope we can convince him to stay.

“When the rain came this morning, I thought that would help us a little bit. There was not much pace in the race so we controlled the pace and he fought on strongly the last 200 metres.”

Shinn said: “You study a lot of replays and do your homework, you look at previous patterns but then you come here a couple of hours before the meeting and you walk the track and I made an assessment to come to the outside, thinking it was the right call early in the day.

“I got it wrong in the first race (on third placegetter Telecom Missile), but thankfully The Rock rewarded me for that little bit of extra homework and it was a fantastic effort.”

“It was a very good ride,” Lor said. “We talked about it with the owners before the race and decided that we should try and follow where the previous winner (The Rock) went.”

“I told Lyle to jump and be positive and see where you land up and he landed up in front. I think the track conditions certainly helped him and he was in really good form today. He’s improved and he’s thriving,” Whyte said.

“The horse has been unlucky and I would say green and immature since arriving in Hong Kong,” Whyte said. “Today, with gate one and a bit of give in the ground, things were in his favour.”

Ricky Yiu followed a double on Wednesday night (11 May) with Cheery’s success under Derek Leung in the Class 4 Norfolk Handicap (1600m).

A son of Artie Schiller, Cheery broke through at this fourth Hong Kong start to give Yiu his 37th winner of the campaign.

Matthew Chadwick continued his outstanding season with victory on Wisdom Patch for Paul O’Sullivan in the Class 4 Essex Handicap (1200m, dirt), marking the former champion apprentice’s 42nd triumph of the term, while Harry Bentley’s strength was decisive in Sparky Star’s success in the Class 4 Kent Handicap (1400m) for Benno Yung.