Sires' masterclass from Anamoe and McDonald

Godolphin’s Anamoe under James McDonald put on a masterclass in taking the $1m, Group 1 Inglis Sires’ (1400m) at Randwick on Saturday destroying the field with ease and class.

Anamoe did not begin as promptly as others in the field but McDonald calmly settled back in sixth racing one out and keeping clear running room at all times. Tiger Of Malay under Hugh Bowman led the field across the High Street side to top of the main straight.

From there McDonald went five wide and Anamoe made up the ground to the leaders in five strides and McDonald then had no hesitation sending the Street Boss colt forward from the 350m. Anamoe showed a fine turn of foot that left the rest for a distant contest of their own.

60m from the finish line McDonald checked the in-field broadcast screen and then just to make sure he looked over his left shoulder. Satisfied that the win was well in the bag he eased on Anamoe with the winning margin still 2 3/4L. The win was McDonald’s 50th Group 1 victory.

Hilal (Fastnet Rock) and Kerrin McEvoy were second with a long head to Captivant (Capitalist) and Tom Marquand. Four Moves Ahead was fourth a further 4L away. 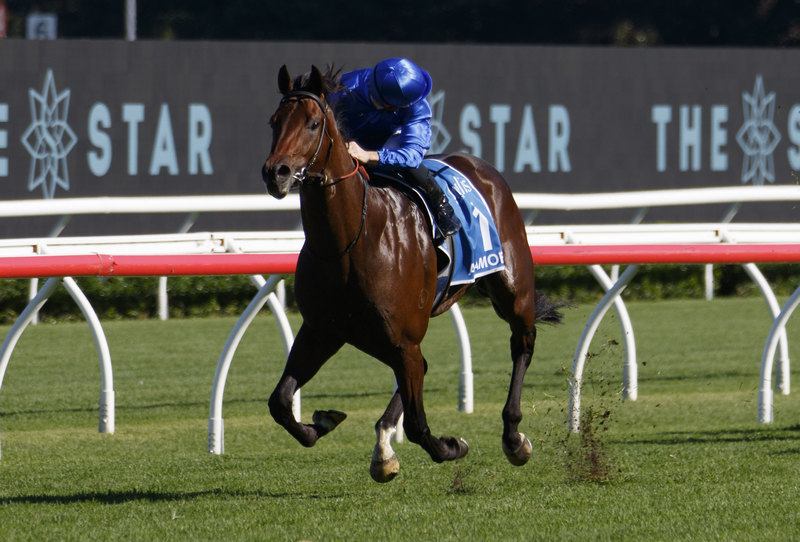 James McDonald searches for the rest of the field, picture Sportpix.com.au

“He has just come through the best of the two-year-old races that are around. He has graduated through all three of our stables, they have got their fingerprints all over this horse. I am just incredibly proud that he is able to absorb the pressure of those Group 1’s, the Blue Diamond, the Todman, the Slipper and he turns up here and is just in absolute perfect condition,” said trainer James Cummings.

“We were a bit tougher on him getting up to 1400m. In fact I have been tough on him his whole racing career and there is nothing that I have thrown at him that has been too hard for him. He continues to just reach new heights every time I raise the bar.

Cummings was confident about heading towards the final leg of the Triple Crown, the Group 1 Champagne Stakes (1600m).

“I do not see why not. I cannot see anything that would be around in the next two weeks that’s going to threaten Anamoe in the Champagne. There are no certainties in it, I think it is just whether or not we are comfortable to run the horse again. But I would say this, it’s a long time to the Caulfield Guineas in October and if that is going to be our target race with him then just to have that strengthening run over a mile before we put him away for a short break,” he said.

“It is amazing. I have been very lucky with the support I have had through the 12 years I have been here, it has been marvellous. Obviously I have so many people to thank but it is this horse’s day in the sun,” said McDonald.

“It is the first time I have ever sat on him and ever seen him in the flesh. I actually have not really taken much notice. He oozes a lot of class. When I cantered around to the gates and pulled him up to a trot, every hoof was clicking. I was thinking, ‘jeez he has got some stride on him this horse,’ because he just strides out. He is a very enthusiastic colt, very push button,” he said.

Tom Marquand (Captivant): “Ran enormous. Still maturing. When he comes into himself he will be a really nice horse in the future.”

Luke Nolen (Lightsaber): “Come to the end of it.”

Hugh Bowman (Tiger Of Malay): “Wide draw didn’t help but it was no excuse.”

Luke Currie (Daily Bugle): “It was a good effort. He held his ground but the winner was a class above.”

Tim Clark (Four Moves Ahead): “Probably just come to the end of the prep. She’s had a good prep. She ran bravely.” 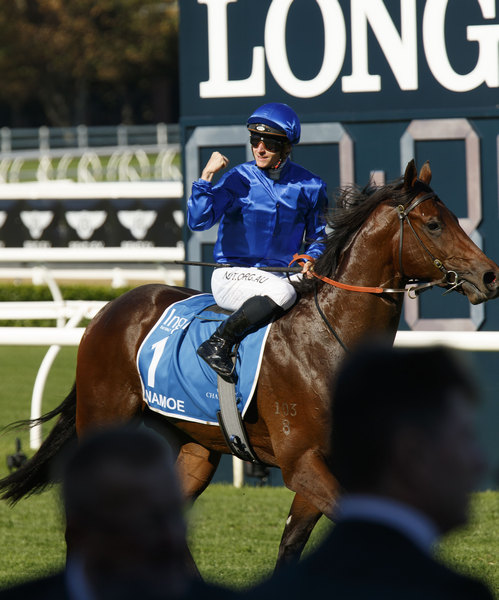