The $1 million, Group 1, Neds Sir Rupert Clarke Stakes (1400m) at Caulfield in Melbourne lived right up to its lofty reputation in Australasian racing when producing another cliffhanger of a finish that witnessed the Trent Busuttin & Natalie Young trained Sierra Sue (NZ) (by Darci Brahma) scramble home for a gutsy win over Dice Roll (Fr) (by Showcasing).

A very good winner of the Group 2 Lawrence Stakes over the same course and distance in mid-August, the 5-year-old mare returned to the scene of her best career victory before today and proceeded to take her record to eight wins from 18 starts punctuated now with a prized victory at the highest level of domestic competition. 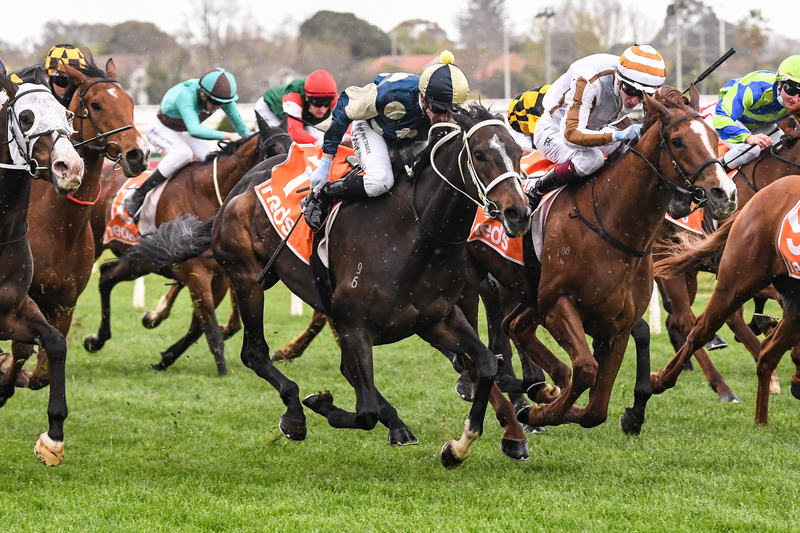 One of a host of live chances of winning the coveted handicap, it was Sierra Sue that secured her winning chance under a consummate ride by Daniel Moor. However, it could easily have been one of a handful of other runners in the field that might well have saluted, and none more so than minor placegetter I’m Thunderstruck (NZ) (by Shocking) — arguably the most unlucky runner of the race.

Drawn exremely wide and taken straight to the back of the field on jumping, I’m Thunderstruck flashed home in the straight to get to just over half-a-length of winning. When the form analysts come to draw their conclusions regarding the latest running of the Sir Rupert Clarke Stakes, it will almost inevitably be the minor placegetter most earmarked as the horse to follow going forward.

However, credit where credit‘s due, and for the fifth time from just seven starts over the distance Sierra Sue saluted, including both starts in distinguished company around Caulfield’s 1400-metre circuit.

Speaking on behalf of the winning training partnership, Trent Bussutin was obviously elated.

“It shows last week [the Feehan] that we were unlucky,” stated the co-trainer. “If she gets a break then she wins … [But then] She carries a couple more kilos [in the Sir Rupert Clarke] and probably doesn’t win the race.

Bussutin added in part: “The team at home have done a fantastic job and it’s good to win another big Group 1 like this. I suppose the Empire Rose [is her next major target] … That $2 million race in Sydney isn’t bad, but I can’t get up there myself so we might stay down here.”

For winning jockey Daniel Moor, the result was essentially what dreams are made of. The journeyman landed his first domestic Group 1 success after a career plying his trade in lower profile racing jurisdictions overseas.

Claimed Moor: “It’s just a life’s work, you know? I rode a Group 1 in Mauritius and it’s pretty easy to forget about those ones. It’s been a life’s work here.

“You watch people win good races and they get emotional [and] you think ‘bloody hell they’re softies’, but it hit me a bit there. She dug in deep for me. I’m just so proud of the mare.

“We weren’t going to be held up from that gate. It was a pretty good edition of the Rupert Clarke; they can be only just editions, but this year was strong.

“When the draw came out I was happy. I saw Probabeel and Behemoth drew in and I knew they would need luck. With 52.5kg on our back we could make our own and it panned out that way.”

“I better thank my manager, Dave Barry. I give it to him every day. I’m a hard taskmaster myself. My wife Lauren, and my kids — I do it all for them, and we’ve been around the world and ridden here, there and everywhere. I’ve dragged them everywhere and they’ve supported me. They’re the reason I get up in the morning.”

Sierra Sue races in the colours of Mr A Kheir, Mr J A O’Neill, Mr V Kheir, Carty Racing, Mr S A Lewin, Mr B D Nettlefold & Mr B F Sokolski and took her earnings through the seven-figure barrier to $1,125,625.

Craig Williams - Behemoth: “Didn’t get the smoothest run with a big weight and he’s run really well. They just out-sprinted him with their lighter weights.”

Brett Prebble - Probabeel: “She was a fraction disappointing. Didn’t jump as fast as I would have liked. Didn’t muster the speed I wanted and Didn’t give me a kick in the straight when we got the hole. She’s run well, probably beaten three-quarters-of-a-length. Just not what I was hoping for.”

Linda Meech - Beau Rossa: “I thought we were a bit close on that speed. It didn’t work out for us today. The race wasn’t run to suit.”

Patrick Moloney - Buffalo River: “I thought his run was honest. Just got attacked a bit sooner than what I would have liked. He probably needed it as well.”

Damien Thornton - Groundswell: “Not up to it.”

Harry Coffey - Aysar: “Ran out of his skin. Had a real crack, too. Did a good job and he’s knocking on the door for one of these races when run to suit him.”

Michael Dee - Romancer: “I wanted to be closer in the run but I just had to niggle at him most of the way. We didn’t have the clearest of passages in the straight. He might have finished a length or so closer.”

Craig Newitt - Samizdat: “He went ok. He stepped a bit slow and was a fair way back. He’ll be much better suited when he gets to Flemington on the big open spaces.”

Dean Yendall - Amish Boy: “All dressed up and nowhere to go.”

Fred Kersley - Dice Roll: <Chose not to comment. Just a short shake of the head>

Dean Holland - Regardsmaree: “Had a good run but didn’t have much luck when we needed it.”

Teo Nugent - Poland: “Had a beautiful run following Sierra Sue, the eventual winner of the race. Just failed to let down in the straight. Probably not a bad run when looking at it.”

Jye McNeil - I’m Thunderstruck: “He performed really well. Just copped a bit of interference in the straight which probably cost him the race but he ran fantastic.”