EDISA – FR
Cantered a lap of the Sha Tin all-weather under work rider Louise Grouselle in a slightly more urgent manner than on Monday.
Travelling head lad Antoine Creton said: “She just had a little canter this morning to open the lungs, nothing too serious. For the moment everything has gone well.”

FURORE – HK
Trainer Frankie Lor said: “He’s in good form, his last run was sound when he finished second and I think he’s improved since that race. I hope he gets a good draw and then he’ll run a really good race.”

GLORIOUS FOREVER – HK
Trainer Frankie Lor said: “He trialled last Friday and he turned in a good trial with Zac Purton on. I think he needs a low draw with his racing style and after the trial I’m hopeful he can run better.”

MAGIC WAND – IRE
Completed a gentle lap of the all-weather track with two stable companions.
Pat Keating, travelling head lad for Aidan O’Brien, said: “They’ve settled in 100 per cent, couldn’t be better. We couldn’t be happier with them. They’ll probably just canter for the rest of the week.”

WIN BRIGHT – JPN
Warmed up in the trotting ring and cantered for a lap and a half on the all-weather track.
Assistant trainer Manabu Kibasako said: “He came out on the track for the first time since we arrived, so he did a little exploring. I tried to make him relax and not get overexcited during the work. He was very patient today. He will gallop tomorrow.” 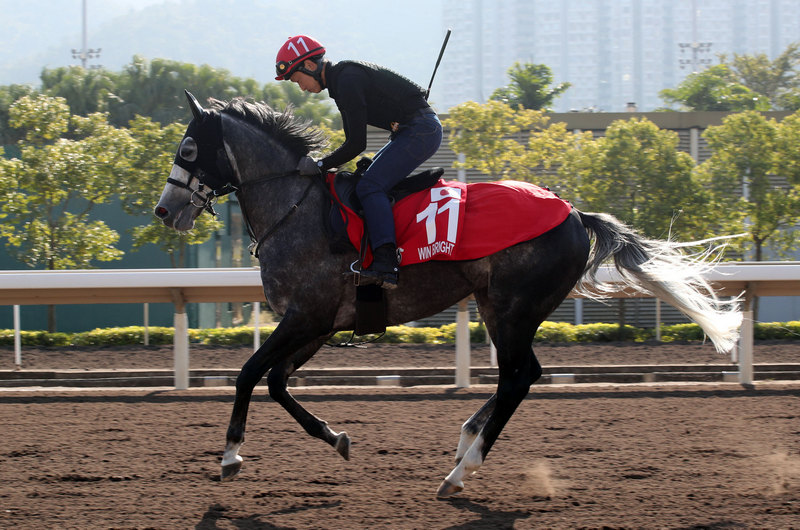 ADMIRE MARS – JPN
Warmed up in the quarantine area trotting ring before cantering a lap and a half around the all-weather course.
Assistant trainer Yusuke Oe said: “He is coming along well. I think he is prepared for a good fast work tomorrow.”

BEAUTY GENERATION – HK
Trainer John Moore said: “He hacked around this morning and I couldn’t be happier with him. He’ll do his fast work on Thursday and now he’s back at level weights it’ll be closer.”

INDY CHAMP – JPN
Warmed up in the quarantine area trotting ring before cantering a lap and a half around the all-weather course this morning.
Assistant trainer Keiichi Shono said “He was relaxed today and moved very well. We plan on giving him fast work tomorrow.”

KA YING STAR – HK
Trainer Tony Cruz said: “I’m happy with him, he’s been running well in his prep and he’s fit and in good form.”

SIMPLY BRILLIANT - HK
Trainer Frankie Lor said: “He’s going well. I put Alexis (Badel) on him yesterday morning (Monday) and he said the horse is in very good form. He worked a half-mile in 56 seconds, there was no need for him to do any more than that. He’ll have a final gallop on Thursday morning.”

NORMCORE – JPN
Warmed up in the trotting ring and worked on turf.
Trainer Kiyoshi Hagiwara said: “She worked on the turf track for the first time since she got here. She was fresh and keen. No concern about her condition at the moment. The turf seems to suit her and she will gallop tomorrow."

PERSIAN KNIGHT – JPN
Warmed up in the trotting ring and worked an easy lap and a half on the all-weather track.
Assistant trainer Isao Saito said: “He is very fresh and is in good shape. Our plan is to gallop him on Thursday.”

AETHERO – HK
Trainer John Moore said: “He hacked around and did it beautifully, I’m very happy with him. Mine will just keep hacking around the big track each morning until Thursday when they’ll do their fast work.”

DANON SMASH – JPN
Warmed up in the quarantine area trotting ring before catering a lap and a half around the all-weather course.
Assistant trainer Keiichiro Yasuda said “He relaxed well on the track today. We will breeze him tomorrow.”

D B PIN – HK
Trainer John Size said: “The boys who have ridden him lately in both the trials and at the races have been very impressed with him - they say that he’s going very well and that he feels good.”

HOT KING PRAWN - HK
Trainer John Size said: “He’s been fine - I haven’t seen anything in him to suggest that he has any residual problem with the procedure (operation for colic) that he had (in February).”

MR STUNNING - HK
Trainer Frankie Lor said: “He’s fitter. He had his first-up run off a light preparation and after that race we gave him a trial - last Friday morning - and he trialled good. He’s trimmed up a bit so we hope he can get back to his best form.”

RATTAN – HK
Worked over 1200m ridden by big-race jockey Chad Schofield.
Trainer Richard Gibson said: “His preparation has gone smoothly enough though not quite as good as in the spring (when he won a 1200m G2 before running second in the G1 Chairman's Sprint Prize) and there was more moisture in the ground then as he likes a bit of cut. He's one of the top five sprinters here but there is no hiding place in Hong Kong. Realistically, he's just got a place chance.”

Schofield said: “He's been a great horse to be associated with and has gone all the way to the top. He felt fresh today and that's when he runs best.”

WISHFUL THINKER – HK
Exercised on the all-weather, having galloped on the turf on Monday (2 December) and covered 800m in 51.4s (27.1, 24.3).
Trainer Richard Gibson said: “He's a powerful son of I Am Invincible and has been a great advertisement for the stable, having won lots of races here with a rating that has soared upwards from 74 to 120. He's one of the top sprinters here but as I said about Rattan there is no hiding place for sprinters in Hong Kong. A strong pace will suit both horses so maybe they can pick up some pieces. If I were a jockey I'd choose to ride Aethero - for a young horse to step up to the plate like he has is really something.”

ANTHONY VAN DYCK & MOUNT EVEREST – IRE
Completed a gentle lap of the all-weather track.
Pat Keating, travelling head lad for Aidan O’Brien, said: “They’ve settled in 100 per cent, couldn’t be better. We couldn’t be happier with them. They’ll probably just canter for the rest of the week.”

ASPETAR – GB
Cantered around the all-weather track, still looking a bit edgy, looking around, and jig-jogging as he had done the previous day.

CALLED TO THE BAR – FR
Following her all-weather work on Monday Pia Brandt switched to the turf on Tuesday for a one lap breeze and clocked 1m 21.7s (28.6, 27.8, 25.3) for the final 1200m. For the second day in a row it was the trainer herself - an accomplished jockey in her native Sweden - who rode Called To The Bar.
Brandt said: “The trip over went fine and he was very relaxed in his canter on the turf today, so I hope he wakes up by Sunday! He worked well at Chantilly before we left and he is ready. I don’t think he’ll go back on the turf later in the week but we’ll see.”

DEIRDRE – JPN
Did light work for about 20 minutes in the trotting ring at the quarantine stable.
Work rider Yuta Komiyama said: “I am happy to see how well she has been doing here. She is in good shape. Jockey Oisin Murphy will ride her fast work on turf tomorrow.”

EXULTANT – HK
Trainer Tony Cruz said: “There have been no hiccups, he’s fit and in great form. He’ll have his fast work on Thursday.”

GLORY VASE – JPN
Warmed up in the trotting ring and cantered for a lap and a half on the all-weather track.
Assistant trainer Yoichi Yahara said: “He was a bit keen when he first came out on the all-weather track, but he is getting used to it. All has gone well at the moment. Jockey Joao Moreira will be aboard for fast work on Thursday.”

LUCKY LILAC – JPN
Warmed up in the quarantine area trotting ring before cantering a lap and a half around the all-weather course this morning.
Assistant trainer Eishu Maruuchi said: “She cantered really smoothly today. She is all set for her fast work tomorrow.”

SOUTHERN LEGEND – HK
Trainer Caspar Fownes said: “His two runs at 2000 metres – he was back in the Gold Cup and finished off in a very good sectional behind Exultant and then the other race (Jockey Club Cup last start) was when he was held up on the corner and still finished off to be third, so I’ve got to be happy with those two runs at 2000 metres. I think the pace over the 2400 metres will be more sedate, so that will give his chance to get in a position and make his own luck.”

TRUE SELF – IRE
Worked over a lap of the turf course and finished in 1m 26.1s (31.6, 31.6, 22.9) for the final 1200m.
David Casey, rider and assistant to trainer Willie Mullins said: “We thought we’d better open her up today so we stretched out over the last 400m. She’s very fit from Australia and everything is going well, I might just breeze her on Thursday but we’ll see how it goes. It’s a very big weekend of jump racing in England and Ireland so I don’t think Willie is going to make it here. Possibly Jackie (wife) will come instead.”

YOUNG RASCAL – GB
Had an easy canter on the all-weather track.
William Haggas’ stable representative Christopher Durham said: “He cantered over seven furlongs, he’s done all his work back home so we'll just take him into the race quietly and keep him ticking over. He won't breeze, he'll just canter into the race.” 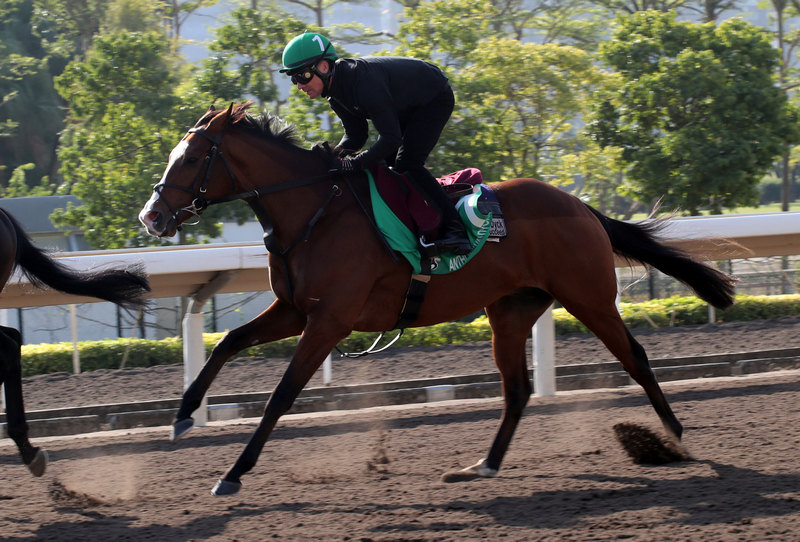