Aidan O'Brien created history today by becoming the most successful trainer in the history in the Investec Derby as Serpentine handed the master of Ballydoyle an eighth winner of the premier Classic. 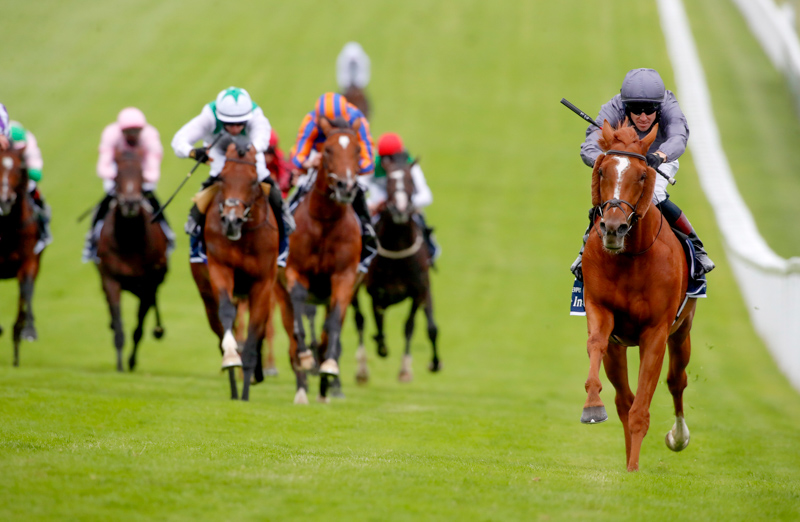 O'Brien said: "We discuss each horse and try and give every horse the best chance in the race and we ride them all accordingly.

"Emmet was happy to go the front on his horse with his horse having won from the front the last day and William (Buick, third Amhran Na Bhfiann) was happy to also go forward if he was able. It was exactly the way it was. Wayne Lordan rode Serpentine the last day and he won it very impressively. He ran through to the line over a mile and a quarter at the Curragh and to do that, you have to be very good and have class and that is what he did really.

"We all watched the race together, Annemarie, Sarah, Ana and Donnacha. Donnacha mentioned at around five furlongs out that he thought Emmet would win here. He was very comfortable and there was no-one going to challenge him and he wasn't going to stop.

"Emmet gave him a brilliant ride. He judged the pace really well. He was a horse who was going to get every yard of the mile and a half.

"We are so delighted. We are in a very privileged position to have such unbelievable horses and such unbelievably well-bred horses. We are working with special people. It is a position very few people will ever get into. The horses have such incredible pedigrees, top and bottom. There are so many special people involved and everyone puts their heart and soul into it day in, day out. Everyone loves what they do and we really appreciate every opportunity that we get and how grateful we are to everyone for what they do. It is just very special for us to be part of such a special team of people.

"Every race and all those big races, it is incredibly satisfying when they do win for everybody. There are so many links in the chain from when the mare is covered and then conceived. There are so many people involved all the way up to the present time. We have so many special people here in the finishing stage. You never really expect anything, and you just hope and do your best and try to get a good result.

"All the lads are always delighted whatever we decide. Obviously, those Classics, there is only one Derby and Oaks - it is just so special to have runners in them and for the lads to be able to ride them. Everyone knows when they get an opportunity, they take it with two hands. It is unbelievable really. It is hard to believe when you think about it but we're so grateful for it really.

"He stays very well. I don't think he would have a problem with soft ground in the autumn in an Arc. This horse has a little bit of knee action and on his pedigree, he would handle slower ground in something like an Arc.

"I didn't really see the other horses and have not chatted to the jockeys yet. Amhrann Na Bhfiann was third and thought he would stay very well which he did do.

"Mogul was fifth and we felt he had progressed from Royal Ascot, but we felt he would progress more and we look forward to seeing him next time. He is a big, strong horse. We thought after two runs he would be ready and obviously the second one had to be the Derby. We look forward to him on his next run.

"Obviously, we would love to be there, but we are lucky to be racing. Everyone is communicating well. We had a good meeting before the racing. Michael Tabor and Derrick Smith are in Barbados along with Sue and John Magnier in Ireland. Everyone is on the call and with Zoom it is easy for us to chat. We would love to be there with you, but it is something we can't do as if I came over and then headed back to Ireland, I wouldn't be able to do anything for a couple of weeks.

"It's great the event has happened. A big thanks to everyone at Epsom. It's marvellous that is has happened and we would love to be there, but it just wasn't to be this year." 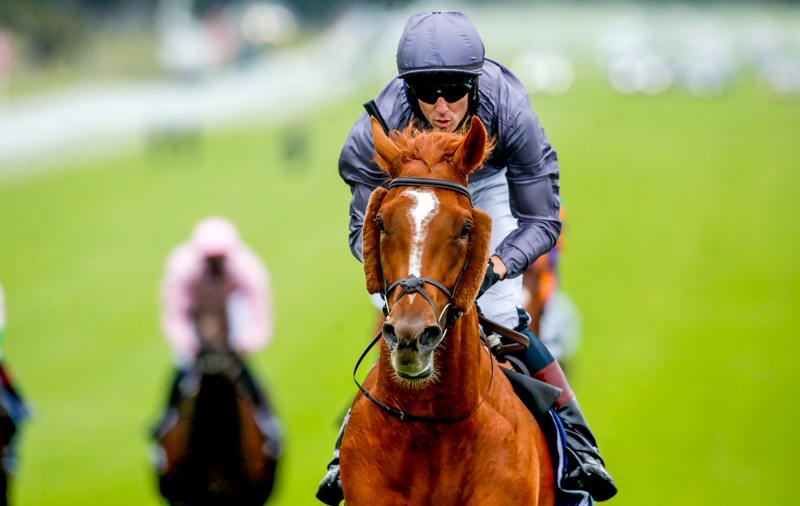 Jockey - Emmet McNamara, 30 years old: "I think I got a little bit of a freebie! I had a huge amount of confidence in the horse having spoken to Aidan during the week. He filled me with confidence and said that he is a horse that is going to stay a mile and six furlongs for you well. He said jump, go your own tempo, from halfway after you give him a breather from the six to the five, you keep building to that winning post, he will keep going. God, he was right!

"It's a bit surreal really, can't believe it. I hope Eric McNamara (father) is OK at home and hasn't died of a heart attack or anything!

"It is unbelievable, a huge amount of thanks and gratitude to Aidan O'Brien and all his family - I have spent a fantastic six years there - and to all the owners who have shown a bit of faith in me today. I really appreciate it."

Paul Smith, son of Derrick Smith who owns winner along with Sue Magnier and Michael Tabor: "Incredible isn't it? Those Galileos - they never know when to lie down! Absolutely incredible.

"I am so pleased for Emmet McNamara, he is a big part of the team back at Ballydoyle. He got chinned in the Irish Derby a week or so back, he works so hard for us, no disrespect to the other jockeys, but I am delighted for him.

"When you have Galileo and you have Aidan, anything is possible! It really is! Aidan knew he would stay well, we knew that, they let him go and he just ran for fun.

"It was an Incredible race to watch, I was very, very hopeful because I knew he would get home, I really did. Once they let him alone, I thought this is going to be interesting.

"We always knew Serpentine would stay, and that he would bowl along in front, and if they came to catch him he wouldn't fall into a hole - we knew that. He quickened away well and put it to bed quite nicely, didn't he?

"Going round Tattenham Corner, I thought it would take a very good horse to peg him back.

"It's incredible [that Aidan O'Brien has now recorded eight Investec Derby wins]. Aidan really is a genius - it's a word that has been used before, but we know he is. He gets his horses so right and works with the pedigrees so well. He has got a great team around him, and I was delighted for Emmet, because he is part of the team and he got chinned in the Irish Derby just a week or so ago and is an integral part of the team. Aidan is just so, so good at getting these horses ready for big races.

"They have done a great job here at Epsom. We really didn't know what to expect, but they have really done an excellent job. I am so pleased for everyone that it was a great day, win, lose or draw."

"Love was classy too, I am just so pleased for the team and Emmet is such a team player.

"[Galileo] He is the holy one! He is the one that they are going to be following for many, many years and long may it last." 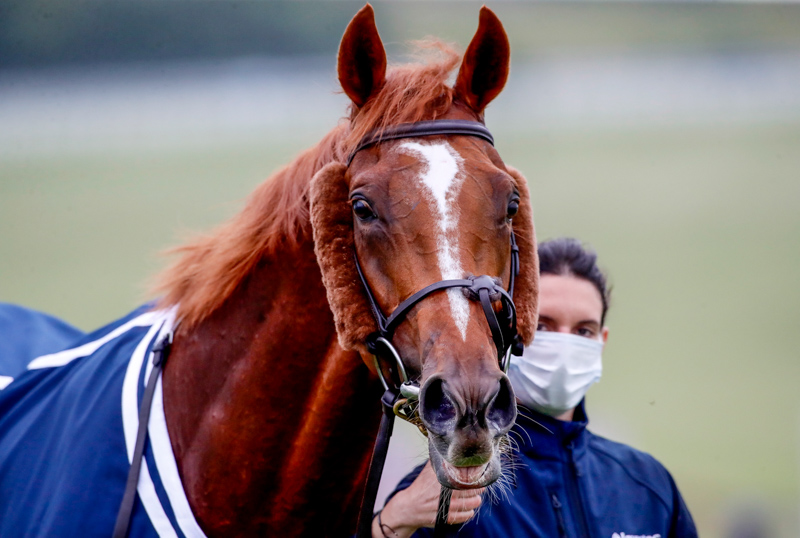 Andrew Balding, trainer of Khalifa Sat (2nd, 50/1) and Kameko (4th, 5/2 Fav): "It was a funny race but Khalifa Sat ran great, I am thrilled with him. And Kameko ran well to a point - Oisin [Murphy] just felt he emptied out a little bit late on. Two lovely horses and fair play, they both ran great. We have always liked Khalifa Sat, he is a lovely type."

Ed Walker, trainer of fifth English King (100/30): "The way the race panned out was frustrating, purely and simply.

"I am thrilled with everything - proud as punch of the horse, Frankie did well from a difficult draw. I have got no excuses, just a frustrating race. A Derby with no pace - there is no such thing these days, really - and we needed pace. But I am proud of the horse, he has run great. My first Derby experience; he has hit the line hard, another 50 yards and he might have been second."

Tom Marquand on Khalifa Sat (second): "We are really pleased with that for a run. Obviously, the leader sort of skipped away early and had that little bit more toe than us. This lad is honest as the day is long and I am looking forward to seeing him over further."

William Buick on Amhran Na Bhfiann (third) "Why is it so quiet round here!? He ran a great race."

Oisin Murphy on Kameko (fourth): "I am thrilled for Emmet McNamara. He has been part of Ballydoyle for a number of years and is a top-class jockey. The winner got a very enterprising ride. I wasn't making any ground late, if anything I was stopping."

Frankie Dettori on English King (fifth): "I had a good trip. Between the three and one furlong, he couldn't pick up and then he was doing all he did best work at the end. He was just inexperienced."

Seamie Heffernan on Russian Emperor (seventh): "He ran well, but the winner was just too far in front."

Padraig Beggy on Vatican City (eighth): "My lad will improve from that. It was only his fourth run. He is one for another day."

Ben Curtis on Highland Chief (10th): "He got a little bit lost early. Once he got travelling, I was too far back. He picked up well, but a more conventional track would suit him better."

Martin Dwyer on Pyledriver (11th): "I had a nice pitch behind Ryan and then I got hampered when we crossed back and that was my race over. I couldn't get into it from there."

Andrea Atzeni on Mohican Heights (12th): "He slipped coming out of the stalls. I just gave him a chance, he probably lacks experience, but will be a nice horse in time."

Harry Bentley on Max Vega (14th): "I had a good position, I travelled OK but as the tempo increased down the hill, I couldn't go with them."