While plans are not yet secure for impressive Satish Seemar-trained opening night 2-year-old debut winner Barack Beach, much of the remainder of Team Zabeel’s enviable 100-plus roster in Dubai appears to be ramping up for a strong December, including some notable new acquisitions.

“You normally want to build up a 2-year-old from six-to-seven furlongs and then a mile, but we don’t have that option with him, so we’re not sure what we’re going to do with him yet,” Seemar said.

“The programme is difficult for a horse like him, who is very fast and needs that seven-furlong race and the mile race is on December 5.”
Meanwhile, one horse who is squarely pointing toward a mile race is the biggest star galloping under the DIFC skyline behind Zabeel: imposing Group 1 winner North America. The 7-year-old gelded son of Dubawi has started stretching his legs as he prepares for the 2020 Dubai World Cup Carnival.

“He’s going very well right now,” Seemar said. “(Group 2 $350,000 Al Maktoum Challenge) Round 1 (on Jan. 9 over 1600m) is always our aim with him and so far he is training the right way and on the right track. Horses go bad overnight, so the closer we get to the race, the more we’ll know, but as of now, he’s training well and is up to galloping (breezing) 600m. With a horse like him, he’s an old pro. He teaching us sometimes instead of the other way around.”

North America may not be the only big horse this season, as Seemar’s impressive 30+ rolodex of private owners have provided some fresh blood in the form of Hutcheson Stakes (G3) winner Gladiator King, Uruguayan and Argentine G1 winner and 2018 Pacific Classic (G1) fourth Roman Rosso and G3-placed Zulfikhar, a $750,000 Fasig-Tipton March 2017 2-year-old purchase with a pair of wins from five tries. Both Roman Rosso and Zulfikhar were trained by Bob Baffert before coming to Zabeel.

“Gladiator King is a fast horse and he’s coming on well,” Seemar said. “We’re still on the rise with him, but these American horses sometimes take a year to adapt here. Zulfikhar is an exciting one. Also, Roman Rosso, who—like Zulfikhar—was with Baffert, is coming on well.”

One ex-American to watch this year in what will be his second season is Behavioral Bias, who was G3-placed last year for Seemar in his initial UAE foray. The same can be said for Touch Gold Racing’s Pop the Hood, who changed yards from Red Stables to Zabeel this season, but enters his second UAE year in good form, as seen when a solid second on Nov. 7 to 100-rated Waady.

“This is going to be Behavioral Bias’s season, I think,” Seemar said. “We’re excited for horses like him and Yulong Warrior, who went to America after we won (the Listed Al Bastakiya) with him and is now back with us. He’s doing well.” 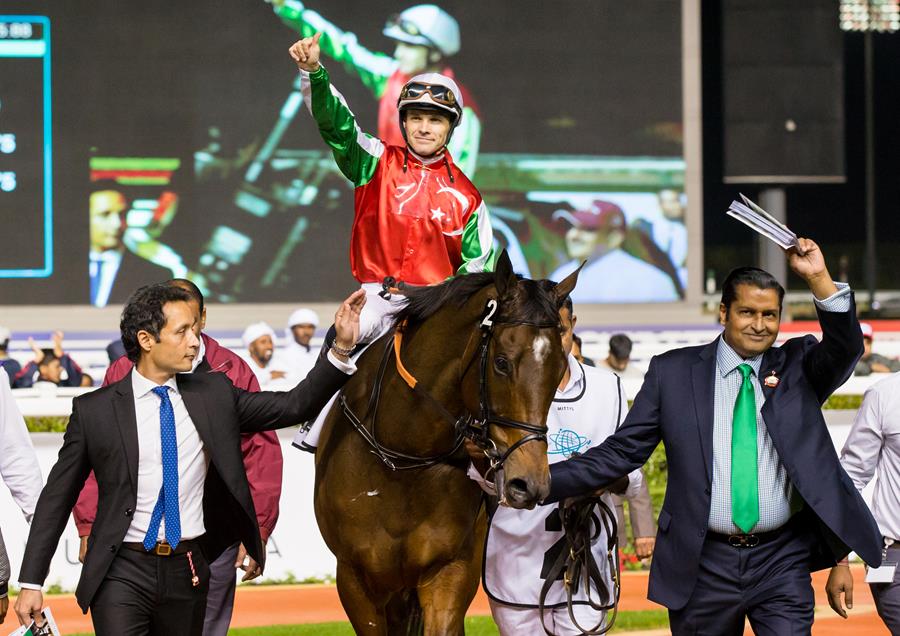