The Tony and Calvin McEvoy trained Hey Doc won his second Group 1 WFA Manikato Stakes (1200m) at The Valley on Friday night with the now seven-year-old Duporth gelding winning the 2017 renewal and returning in 2020 to not only win, but in a new track record time.

Hey Doc under Luke Currie settled third as Bella Vella and Jamie Kah led the field into the main straight at speed. Currie challenged with Hey Doc with 300m to run and then had to hold out a strong run from Trekking and John Allen to their outside.

Dirty Work and William Pike were inside and these three went away from the rest. Hey Doc kept up his sprint to win by an unquestioned 3/4L margin to turn back the years in emphatic fashion.

The $3.70 favourite Trekking (Street Cry) and Allen tried valiantly, but could not bridge the gap under the speed of the winner and they kept out Dirty Work (Written Tycoon) and Pike with the margin a short neck. Brooklyn Hustle was fourth, 1 13/4L away. 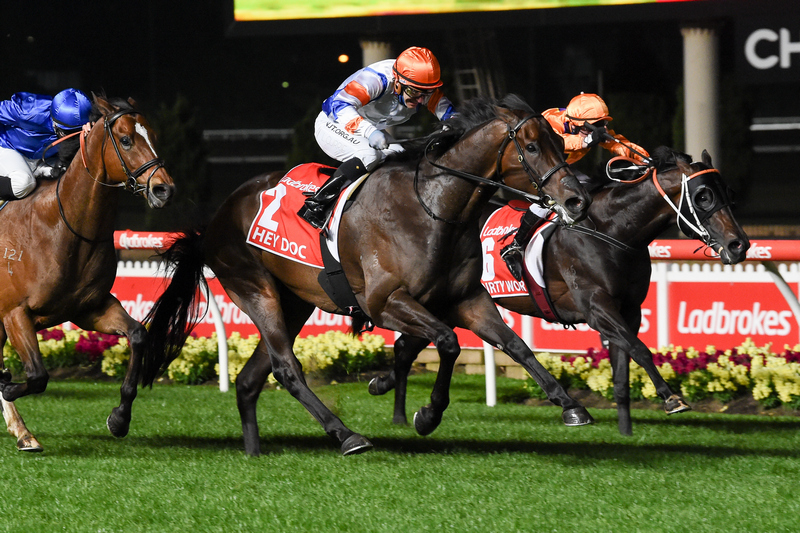 “It is a big team effort and we’re just so thrilled,” said Calvin McEvoy.

“We have targeted this race. He needed those couple of runs. He is an older bigger horse now.

“On Tuesday morning we brought him here, gave him a good bit of work. He was a bit casual on his own. He had a bit of a puff but we knew it would clean him up perfectly.

“I wish they (owners) were here. They have been patient throughout his whole career. He has had a couple of setbacks.

“When he came back and won the (Group 1) Winterbottom off injury that was a special moment, but this is his fourth Group 1 now. There is not many horses that win four and it is a very special moment,” he said

“He is a beauty. He puts himself on the speed and he tries heart out. He just brings it every time he comes to the races," said Currie.

“I just thought the way the track was playing and being drawn where we were, or advantage was to be bang outside (the) lead and Bella Vella was very fast so I decided that it was probably better to come back off it because they were going so quick.”

Currie was injured at Geelong on Wednesday with the win just reward for recovering.

“It was a bit of a worry. I landed on my head and neck in exactly the same spot of the injury that I just came back from. I would like to thank everyone that helped me out there on Thursday in hospital in Geelong and especially my physio, Andrew Wilson. I keep backing up to go and see him and he’s been looking after me. He got me to the races today.”

Hey Doc, out of the General Nediym mare Heyington Honey, has endured injury and time to return to his former heights. His fourth in the Group 2 Schillaci Stakes over 1100m at Caulfield on October 10th suggested he was returning to the form of his last win in the Group 1 Winterbottom Strakes over 1200m at Ascot last November, but to retake the Manikato Stakes in record time was a testament to the stable’s work with the now veteran.

Damian Lane on Pippie: “She just didn’t break as clean as she normally does and wasn’t as quick into stride so I was forced to use her early and it just cost me late in the race.”

Craig Williams on Kementari: “I thought he raced well. The blinkers on was a bit of a gear change for him. He stayed on but he felt like the pressure of the 1200 metres might’ve said that he’d be better suited over a little further and he can travel a bit longer. Under the circumstances I thought he still committed himself quite well tonight.”

Mark Zahra on Brooklyn Hustle: “She ran super. It was just hard for the backmarkers tonight but I think she’s going really well.”

James McDonald on Lyre: “She ran OK. She’s looking for seven (furlongs) now and they were too fast for her.”

Jamie Kah on Bella Vella: “She had to do a bit of work early but she didn’t feel like her normal self. She felt pretty short in her action.”