Over the same 2000m on dirt as the $12 million Dubai World Cup, the race was won in determined fashion by Salute The Soldier. The 6-year-old Sepoy gelding was given a polished ride by Adrie de Vries, the pair in front after about 100m and staying there. Victorious on this card last year, when never headed in the 1600m Group 3 Burj Nahaar, he arrived here having landed his previous start, the 1900m Al Maktoum Challenge R2 and has now won four times for current connections having won the same amount when trained in Britain by Clive Cox.

Purchased for 380,000gns at Tattersalls in October 2019, he has proved a shrewd purchase who is equally effective on dirt and turf. Trained by Fawzi Nass for Victorious, he was always travelling well for De Vries who set sail for home at the top of the straight, the pair always seemingly holding the challenge of Hypothetical.

De Vries said: “He stayed the 1900m so well last time we were confident the extra 100m would be fine and so it has proved. I was able to set the fractions to suit myself which was ideal and that was a very good performance. I did not expect to be able to lead really, but was more than happy to do so.

“This is my biggest UAE winner and it is a massive result for myself and the whole team. This horse is a lot more relaxed this year and has really matured. I am now really looking forward to the World Cup in three weeks’ time.” 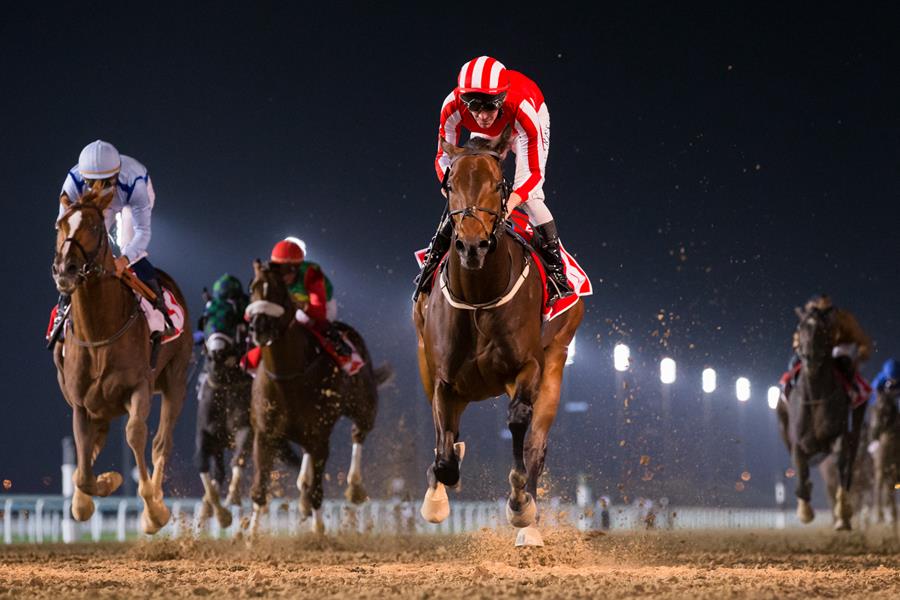 The main turf race, the 1800m Group 1 Jebel Hatta sponsored by Emirates Airline produced a dramatic finish with Lord Glitters finishing fast and late to snatch what had appeared an unlikely victory throughout most of the long straight.

Settled in last by Danny Tudhope, the admirable 8-year-old grey Whipper gelding tracked Godolphin’s Al Suhail, but looked in trouble when the latter hit the front with about 200m remaining. However, the Godolphin horse drifted off a straight line, eventually losing second to Eqtiraan with Tudhope’s mount passing them both in the final 50m.

Trained by David O’Meara, thus representing Britain, it was a second course and distance victory at this carnival for Lord Glitters who, when partnered by Adrie de Vries, made a winning start to his campaign in the Group 2 Singspiel Stakes. Then, under Tudhope and carrying a penalty, he was third to Zakouski in the Group 2, Al Rashidiya over the same track and trip, having beaten that Godolphin runner in the Singspiel Stakes.

It was also a second Group One victory for Lord Glitters, victorious over 1600m in the Queen Anne Stakes at Royal Ascot in 2019.

Tudhope said: “He only really picked up in the last 300m and I was worried for a fair way. The race was not run to suit him as he prefers a much faster gallop, but luckily, it all worked out in the end.
“We can look forward to the Dubai Turf now when, hopefully, they will go a good gallop from the outset as opposed to how this race panned out.”

Also on turf, the 2410m Dubai City Of Gold sponsored by Emirates Holidays was dominated by Godolphin whose quartet of runners in a field of just seven filled the first four places. It was Walton Street, confidently ridden by William Buick and the only Charlie Appleby representative, who landed the spoils, easily, from the Saeed bin Suroor trio Dubai Future, Desert Fire and Brilliant Light.

Appleby was landing the prize for a fourth consecutive season, three ridden by Buick, and Godolphin for the fifth year running in a race they have a tremendous record; this was winner number 12 in the contest for the owners. Having settled in third, Buick eased his mount to the front as early leader Communique started to struggle, about 800m from home and the race was over as a contest shortly afterwards, the pair powering home to win stylishly.

Buick said: “He really impressed me last time and was very good again today in a slowly run race. He is a horse with a nice stride and one who stays well.

“The handicap he won had worked out very well, so we were very hopeful and you would have to think he can go to the Sheema Classic with a decent chance.”

The third turf feature and final race on the card, the 1200m Group 3 Nad Al Sheba Turf Sprint sponsored by emirates.com, provided Godolphin the perfect opportunity to get a double on the scoreboard, Final Song just holding on under Frankie Dettori for Saeed bin Suroor.

Settled in midfield, on the far side from her low draw, the homebred 4-year-old Dark Angel filly was dashed to the front with 300m to run, opening up a decisive lead, but one that was diminishing rapidly as the line approached, Motafaawit charging home, but just failing to complete trebles for Doug Watson and Pat Dobbs.

Having won her juvenile debut, over 1000m at Ascot, she doubled her career tally at the 2020 carnival, landing the 1400m UAE 1000 Guineas Trial, on dirt. Third over 1600m in the UAE 1000 Guineas, she filled the same position in the Saudi Derby before a busy campaign in Europe.

This was her third success in total and Bin Suroor said: “She is a tough, genuine filly and very versatile regarding trip and distance. This 1200m on turf really suits her and the Al Quoz Sprint will be next.” 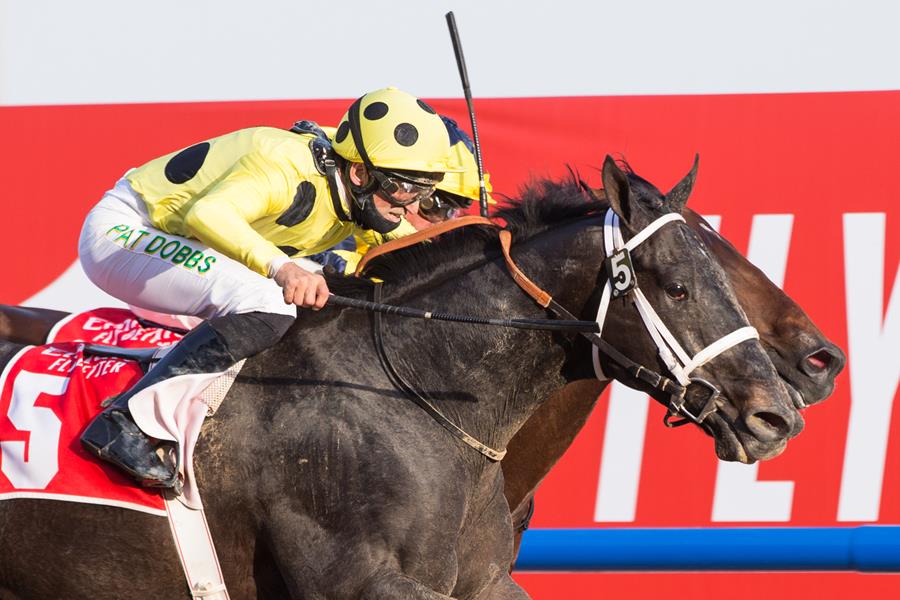 Over 1200m on dirt, the Group 3 Mahab Al Shimaal sponsored by Emirates Skywards was won in dramatic fashion by Canvassed who flew home under Pat Dobbs to deny Good Effort who had led virtually from the outset under Frankie Dettori.

Settled in the middle of the 13 runners, Canvassed had an awful lot of ground to make up entering the straight, but really hit his stride passing the 300m pole, eventually passing the post a neck to the good. Trained by Doug Watson for Sheikh Mohammed Obaid Al Maktoum, it was a fourth career success for the 6-year-old Shamardal gelding and second locally having won a carnival handicap over this 1200m on his previous start, a month ago.

Dobbs said: “They went very fast early on and my horse, who is not slow, struggled early on. He has always worked like a nice horse and has really started to get his act together.”

Also on dirt but over 1600m, the Group 3 Burj Nahaar sponsored by Emirates SkyCargo also went to Watson and Dobbs, this time sporting the silks of The Cool Silk Partnership aboard Midnight Sands.  A 5-year-old entire son of Speightstown, Watson’s charge has now won his last five Meydan appearances, beaten just once locally, on his very first UAE outing. After four victories last season, he had three starts in the States before returning to Watson and was making a winning seasonal reappearance on his first start since the beginning of November.

In a capacity field of 15, Dobbs was content to settle in just behind the early leaders before cruising into contention on the home turn. Dobbs then drove his mount to lead with about 250m remaining, sweeping past Chiefdom who plugged on gamely for second.

Watson said: “He is an easy horse to get fit, but to be honest, I must admit from stall 12 I thought he would struggle. However, they went very quick which has helped and he has really impressed me today. He loves it here as we know and we hopefully go to the Godolphin Mile with a big chance.”

The meeting kicked off, again on dirt, with the Listed Al Bastakiya sponsored by Arabian Adventures, restricted to 3-year-olds and the 1900m middle leg of the UAE Triple Crown. Twelve went to post, but there was only one leader for the vast majority of the contest, Mickael Barzalona soon taking Panadol to the front and the pair then never headed.

Easy winner of a 1600m dirt maiden on this course three weeks ago on his only previous start, the Flatter colt had to work harder on this occasion but is clearly a very useful performer. It was a first win in the race for Barzalona, owner Sheikh Hamdan bin Mohammed Al Maktoum and trainer Salem bin Ghadayer.

Bin Ghadayer said: “Obviously he is an inexperienced horse, so we brought him here to give him another race before the UAE Derby. He will have learned a lot more today because he had a wide draw whereas, last time, he had a low draw and everything was a lot simpler.

“He is a horse we have always liked and we are delighted he has shown his talent on the track because he has always worked like a very nice horse.”

Barzalona added: “I was actually surprised I was able to get to the front pretty easily and he is learning about racing all the time. He is a nice prospect and improving all the time.”