Sacred Judgement gets the verdict again

The penny has taken a while to drop, but Sacred Judgement has finally shown his true colours with three wins in a row at his last three starts at Kranji.

At his first 15 starts since early 2020, the So You Think six-year-old did give bits and pieces of ability through four seconds and two thirds, sometimes against handy sorts like Heartening Flyer, Siam Warrior or Trading Post, but that early formline seemed to have headed South this year.

Trainer Mark Walker couldn’t quite ascertain what the issue was other than putting it down maybe to some feet niggles, but his patience and belief in the gelding were eventually rewarded. 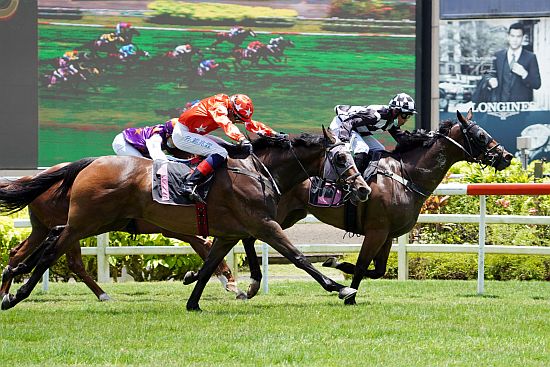 Following a closing second to Hadeer in Class 4 company in a 1200m event on July 25, Sacred Judgement went back-to-back in similar contests, and has now made it a hat-trick of wins when stepped up to the 1400m of Saturday’s $50,000 Debt Collector 2018 Stakes, again at Class 4 level.

“He just got a bit stronger, more mature,” said Walker.

“He doesn’t have the best feet, and immaturity was probably the other reason why he couldn’t run to his true potential.

“The race didn’t pan out the way I thought it would, one inside and one outside, but that’s racing, and it’s worked out well for us.

“Hakim (Kamaruddin) is riding very well and with a lot of confidence. He shows the right attitude and has his feet on the ground, so does everyone else at the stable.”

The race was won at the start when the leading apprentice jockey punched Sacred Judgement out of his wide alley to join The Wild Bunch (Koh Teck Huat) and Asgard Massif (Iskandar Rosman) in vying for the early supremacy.

With the speedy trio clapping along hand over first, it left a wide gap on the rest, which allowed Hakim to drag his mount into a lovely spot on the fence behind the other pair.

From such a dream ground-saving run, Sacred Judgement unsurprisingly looked full of running when he took a gap between the tiring The Wild Bunch and Asgard Massif upon straightening.

One luckless runner was the well-backed Royal Return (Oscar Chavez) who was eyeing off a sneaky run on the rails at the 300m, but got cramped for room before being eased into ninth place, only four lengths off the winner.

Paying $29 for a $5 outlay, Sacred Judgement recorded 1min 22.28secs for the 1400m on the Short Course and has now chalked up more than $134,000 in stakes earnings for the Remarkable Stable.