Hakim Kamaruddin’s patience in the saddle went a long way in sparking Sacred Croix back up for a long-awaited return to the winner’s enclosure at Kranji on Saturday.

The Savabeel six-year-old has not greeted the judge in nearly two years having last scored in Class 3 company for a four-in-a-row in April 2019, a feat which pretty much stamped his ticket to the Singapore Four-Year-Old Challenge.

Unfortunately, the horse previously raced by the Raffles Racing Stable did not win any of the three legs, albeit far from disgraced with two seconds in the first two, the Group 3 Silver Bowl (1400m) and Group 2 Stewards’ Cup (1600m), and a creditable fifth to Sun Marshal in the Group 1 Singapore Derby (1800m). 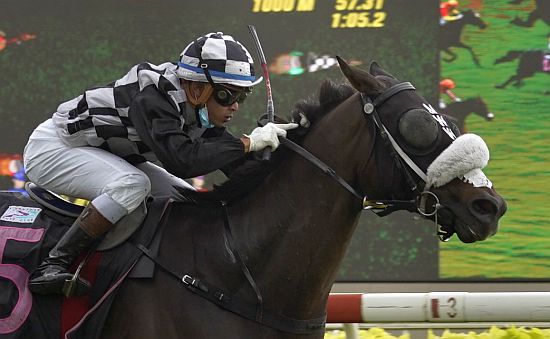 Trainer Mark Walker gave Sacred Croix a well-earned break after the Derby, but the performances had slowly slipped downhill since.

A closing fourth place in a Class 2 event over the mile with Hakim up was probably one of his rare flashes of brilliance, and it’s precisely that run that was etched in the young Malaysian rider’s mind when he cantered Sacred Croix down to the pens in the $70,000 Class 3 race over 1200m on Saturday.

From the handy barrier in three, Hakim was able to tuck Sacred Croix, who was hammered late into $22 favouritism, onto the fence in midfield, spotting leader Makkem Lad (Yusoff Fadzli) about five lengths.

Into the straight, Siam Warrior (Ruan Maia) came serving it up to Makkem Lad, but the latter kicked into second gear while the favourite looked to have his job cut out when still giving the leaders a big start – about four lengths.

But backers needn’t have worried. Hakim was on top of things; he had listened to his master’s instructions to the letter, aided further by his own previous association with the horse.

Once the Kelantan-born hoop peeled Sacred Croix across heels towards daylight, they quickly gobbled Siam Warrior up before collaring Makkem Lad enroute to what turned out to be a soft two-and-a-quarter length win.

Makkem Lad was a gallant second after successfully repelling Siam Warrior into third place another one-and-a-half lengths away. The winning time was 1min 8.88secs for the 1200m on the Long Course.

“I cannot go too early on the Long Course, boss also told me to hold as long as I could. The horse was very relaxed and I wasn’t worried the leaders were still far in front.

“He has not raced for a long time and was also a bit fresh. That’s why I didn’t want to go too early also.

“But once he came out into the clear, he quickened very well. I work the horse in the morning and I felt he had improved, I was confident he would run well.”

After his win counter had stalled at four for so long, Sacred Croix has at long last added another stick to his tally to push his record to five wins and three placings for prizemoney that has tipped over the $300,000 mark for the Remarkable Stable.