Racing Victoria (RV) Stewards' on Tuesday released their determinations on whether horses implicated in the Aquanita Case may be subject to disqualification.

These determinations take into account the decisions of the Racing Appeals and Disciplinary Board (RAD Board) on 8 May 2018 and/or the Victorian Civil and Administrative Tribunal (VCAT) on 13 September 2019.

Licensed trainers Robert Smerdon, Stuart Webb and Tony Vasil and registered stablehands Greg and Denise Nelligan, Trent Pennuto and Daniel Garland, all of whom were employed by Aquanita, were each disqualified for improper or dishonourable action(s) or practice(s) in connection with racing.

Following the 30 January 2020 closure of the VCAT appeal window, RV Stewards were required to give careful consideration under the Australian Rules of Racing (AR) as to whether they would exercise their powers to disqualify any implicated horses.

In what is a complex matter given the nature of the conduct charges, evidence and RAD Board and VCAT findings, the Stewards have thoroughly analysed the available evidence with respect to 395 incidences and reached the following outcome:

1. A preliminary determination that 81 starters should be considered for disqualification from the race in question based on the finding of an actual administration by VCAT and/or the  available evidence/information, including it being obvious within text messages that the horse was the subject of a prohibited administration at the relevant track on the relevant date;

2. A final determination that a further horse was the subject of a finding of actual administration by VCAT and it was obvious within text messages that the horse was the subject of a prohibited administration at the relevant track on the relevant date, however the horse was a late scratching and therefore is not eligible for disqualification as it did not start in the race and obtain a placing; and

A list of the 81 starters and the relevant race, track and date as outlined in (1) is below. Furthermore, a search tool has been published on the RV website at www.racingvictoria.com.au/aquanitasearch for the owners of any Aquanita-related horse and those that may have competed against them to check their status.

The Stewards have today written to the Managing Owner, or their representative, as registered on the date of the race and representing the owners at that time, of each of the 81 starters in question with a Show Cause Notice advising them of their preliminary decision under AR 234 and the grounds for that.

Each Managing Owner, or their representative, has been given the opportunity to table a response in writing as to why their horse should not be disqualified from the race in question. This window of opportunity for responses will expire on Monday, 10 August 2020.

Consideration of Show Cause Responses

Following the conclusion of the Show Cause period for the 81 starters on 10 August 2020, the Stewards will then make a final determination as to whether a horse is disqualified or not.

A timeline has not been imposed for a final determination on the 81 starters, noting that the Stewards will need to carefully consider each submission made, however it is expected that it will be longer than the Show Cause period and it is likely that final determinations will be made intermittently.

At the point at which the Stewards make a final determination on the Show Cause Notice, the following will occur for each of the 81 starters:

• The Managing Owner, or their representative, at the time of the race in question will be notified in writing of the Stewards’ decision; and

• RV will publish a notice of the Stewards’ decision on www.racingvictoria.com.au, noting that this may be done individually and/or collectively depending on the timing of the Stewards’ final determination.

Should the Stewards’ final determination be that a horse is to be disqualified, the following will also occur:

• The placings will be amended accordingly in the race in question and the connections of horses who finished behind the disqualified horse being the Owners, Trainers and Jockeys, will be paid by RV the balance of any prizemoney owing based on the amended placings, so long as they are eligible to receive prizemoney.

The payment of such prizemoney will be subject to the expiration of any appeal rights.

AR 224 – The Repayment of Prizemoney

Should the Stewards determine to disqualify a horse, it will then be a matter for the RV Board and/or Chief Executive to determine whether RV exercises its rights under AR 224 and orders that any prizemoney won and paid to the Owner(s), Trainer and/or Jockey of the disqualified horse in the race in question be returned to RV.

No determination regarding AR 224 has been made by RV at this time and each case will be considered on its merits.

“This is a unique and complex case which required the stewards to consider Tribunal findings and available evidence to them in cases which ultimately saw people disqualified for improper practice not swab samples," said RV Executive General Manager – Integrity Services, Jamie Stier.

“Having considered all the facts, the Stewards are satisfied that they can clearly identify 81 starters that were the subject of a prohibited administration and thus they have today written to the Managing Owners of these horses at the time of the relevant races, or their representatives, to afford them the opportunity to state why their horse ought not be disqualified from the race in question.

“The Stewards are not satisfied that the other 313 starters ought be considered for disqualification as the available evidence did not definitively demonstrate that those horses were the subject of a prohibited administration on the given day.

“As people are aware, text messages between the disqualified persons were central to the RAD Board and VCAT’s findings regarding the participants’ improper or dishonourable action or practice; however these texts often referred to multiple horses or lacked clarity around which horse was the subject of said practice on a given day.

“Accordingly, while the evidence made it clear that those charged had engaged in unlawful practices, determining which horses were subjected to those practices was not possible in all instances.

“I want to make it clear that in reaching their position the Stewards considered the RAD Board and VCAT’s findings and the available evidence only, and gave no consideration to the status of the race, and/or the prizemoney won by an individual horse, and/or the finishing position of the horse.

“Of the 81 starters for which a preliminary determination has been made that they be considered for disqualification, 24 were winners, 24 were minor placegetters and 33 were unplaced, with the prizemoney won by each varying from $300,000 to none at all. As it stands, more than half of them won less than $10,000 in the race in question.

“In making this announcement, we do not intend to provide commentary on every individual horse and the Stewards’ considerations thereof. Beyond today we are committing to inform the industry of the Stewards’ final determination regarding the 81 starters for which the Show Cause Notices have been issued.”

Please find following a list of the 81 starters and races for which the Stewards have made a preliminary determination that they should be considered for disqualification: 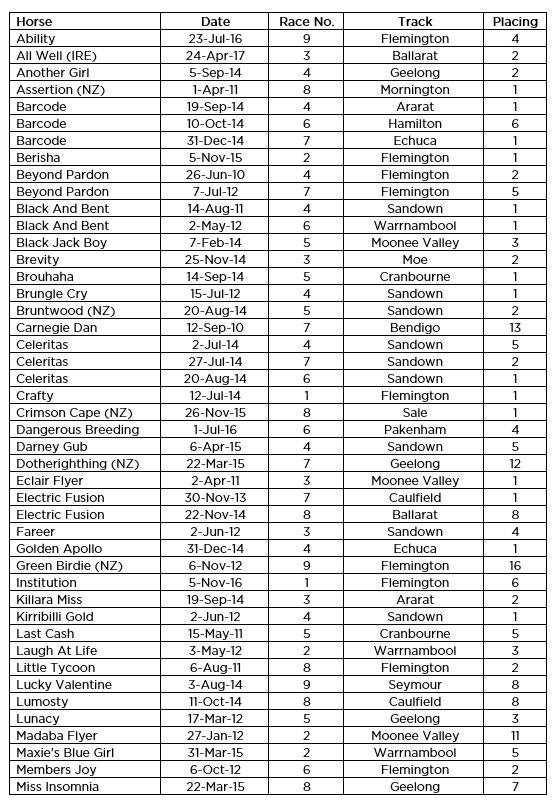 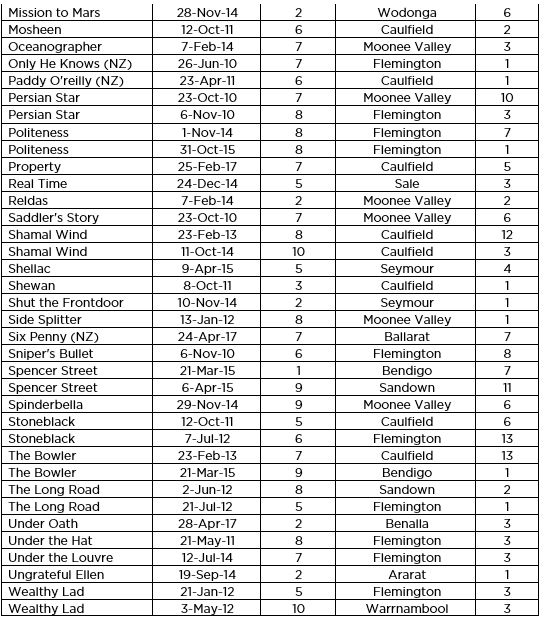 The following horse would have been considered for disqualification if it finished the relevant race, however it was a late scratching at the barriers and therefore could not be: