Royalzel wins the duel at Rosehill

The two-year-old’s provided a fascinating wagering duel before they started in the $125,000, E Group Security Handicap (1500m) at Rosehill on Saturday with punters who backed Gary Portelli’s Royalzel from $5.00 into $4.80 making the right move. 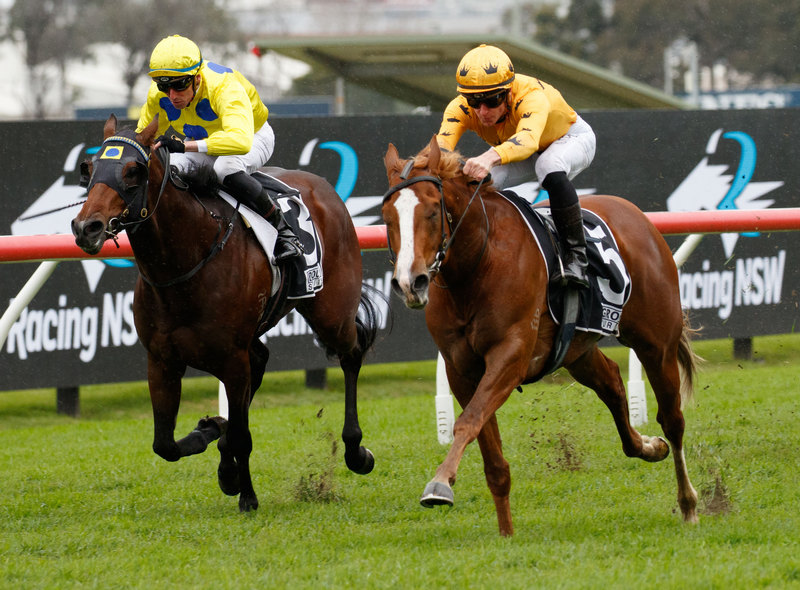 Royalzel with his white blaze courtesy no doubt from his dam side in command under James McDonald, picture Sportpix.com.au

The market's interesting look had Verbek (NZ) the early market elect before Saturday, but drifting from $4.00 to $4.80, Deficit was backed from $6.00 early Saturday into $4.60 as was My Snow Queen with the same market push.

It was My Snow Queen (carried 52kg) with apprentice Tyler Schiller who led the field down the back and across the top followed by Hundred Proof and Verbek. Royalzel (57.5kg) and James McDonald sat at the back of the seven strong field.

Approached the 500m Hugh Bowman sent Verbek three wide to put in a challenge, however, quickly it was apparent that they did not have sufficient momentum on the heavy track. My Snow Queen and Schiller were still leading at the 300m with their light weight, but the race changed in an instant when Royalzel and McDonald arrived.

After sweeping wide to the middle of the track off the turn McDonald sent Royalzel off and with a good turn of foot on the rain impacted ground the Snitzel colt made light work of catching the leaders and going away for a good 1 1/4L winning margin without being pressed to achieve it.

This was the second win for Royalzel, out of the Show A Heart mare Royal Tithe, after winning at Kembla Grange over 1300m on May 25th in similar conditions.  After his three starts the colt has now earned $108,865 for his owner MG Russell.