Saturday racing in Sydney returns to the metropolitan area after the stand alone meetings at Newcastle and Kembla Grange over the past two weeks with Rosehill to host three black type races including the $160,000, Group 3 Festival Stakes (1500m).

There were 20 nominations on Monday for the Festival Stakes including the Hawkes’ trained last start winner Outrageous. The five-year-old All Too Hard gelding was consistently campaigned at a high level earlier in his career with results that included a third in the 2018 Group 1 ATC Sires’ Produce Stakes over 1400m at Randwick.

The win at Flemington over 1400m at Benchmark 90 level on the Melbourne Cup programme on the 3rd was his fourth from 28 starts. He was well placed by William Pike being third at the 400m and then running away with the race with 57kg to win by 1 3/4L.

Chris Waller has nominated Savacool (NZ) who was third behind Black And Gold and last Saturday’s  The Gong winner Archedemus in the listed Ladies Day Cup over 1600m at Hawkesbury on the 11th. The stable have also nominated Sambro who would be resuming for a new campaign.

Overall there are 183 nominations for the  nine race programme.

The heat resumes at Rosehill literally this week with partly cloudy days and 24c and 25c on Tuesday and Thursday, before sunny conditions on Thursday and Friday have 31c and 28c. Saturday’s forecast is for a sunny day and 16 to 37c. 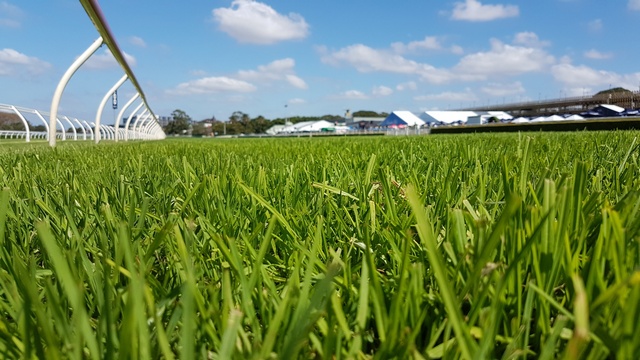 Rail in the True position for Saturday, picture ThoroughbredNEWS