Rocket Star shoots the Moon down

Smart miler Rocket Star came off a well-laid plan devised by his trainer to upstage the unbeaten Moon Face and return to winning ways in style at Kranji on Sunday.

Dropped back in trip to 1200m after his laudable second to Inferno in the Group 1 Singapore Guineas (1600m) a month ago, Rocket Star was ridden a lot more positive than usual.

From the outermost alley in 14 and from the way the track had been playing all day, South African trainer Ricardo Le Grange reasoned it would be to his horse’s detriment if he were to take up his customary rearward spot in a sprint race going at 100 miles an hour, especially with hot favourite Moon Face expected to lead the charge. 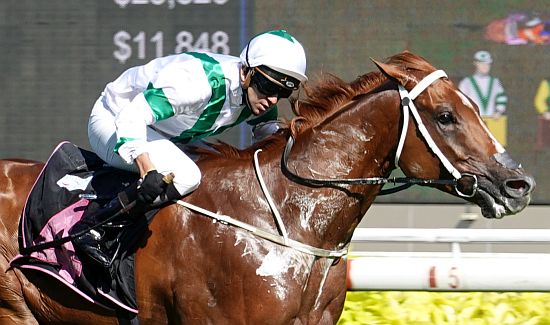 The Argentinian-bred grey did indeed dash to the head of affairs upon dispatch, but Rocket Star with Vlad Duric up was quick to snap at his heels after coming across from his wide barrier.

Duric was quite content to pull the handbrakes on Moon Face’s girth before taking the race up to Cliff Brown’s charge as soon as they swung for the judge. It soon became evident Moon Face would not give the slip like he did at his two wins, and it was the second fancy ($14) who would earn the thicker end of the prizemoney.

When collared by Rocket Star on the outside, Moon Face tried to muster a fightback, but was left flatfooted when his challenger edged clear by half-a-length, eventually buckling inside the last 50m to run a disappointing sixth.

It was the fast-finishing Charger (Krisna Thangamani) who instead grabbed second place one length away with Watch Out Boss (Benny Woodworth) third another 1 ½ lengths away. The winning time was 1min 9.28secs for the 1200m on the Short Course.

“It was a very satisfying win for a lot of reasons,” said Le Grange.

“Firstly for the horse himself as he’s just been a bit unlucky, bumping into Inferno. He still ran a great second to him in the Singapore Guineas (September 26), he deserved to crack it for a win again just to get his confidence back.

“It’s also great for the owner Tatay (father in the Philippines’ tagalog) Rudy (Mendoza) and his son Paolo. They are thorough gentlemen.

“And for Vlad, who also rode a great race. We also worked out a plan today, and it’s paid off.

“From the wide draw, we definitely had to go forward as he was dropping back to sprint and we know the favourite will go quick, but the track’s also been riding very fast and we didn’t want to get caught too far back.”

Le Grange will for now take his time to soak in that fourth win from the Star Witness four-year-old, but that doesn’t mean he will let him rest on his laurels either.

“I may look at the EW Barker for him. I’ll have to discuss with Rudi and Paolo first,” said Le Grange.

The Group 2 EW Barker Trophy is a handicap feature race over 1400m and will be staged on November 15.

Rocket Star has now built up a smart record of four wins, eight seconds and one third from 14 starts for close to $350,000 in stakes earnings for his lucky connections.