Rising star Champion’s Way goes for six in a row

Champion’s Way’s (132lb) unbeaten streak goes on the line in the finale at Sha Tin on Saturday as trainer John Size’s exciting rising star aims to become the 29th horse in Hong Kong’s professional era to win six races in a season.

Remarkably, Size has trained six of the “six-timers”, including Entrapment, who along with the Tony Millard-trained Ambitious Dragon went on to claim seven in a season. Beauty Generation’s recent saunter in the G1 Champions Mile took the current king of the scene to an all-time record eight in one term.

Whether or not Champion’s Way can reach the heights of the aforementioned will be determined in time but the three-year-old has certainly achieved his five wins to date in the style of a horse destined for a high level. His latest success was franked when runner-up Good Standing waltzed away with last weekend’s feature, the Class 1 Hong Kong Macau Trophy.

“You couldn't help but be impressed, he’s won his five races quite handsomely and I think there’s more in him,” Size said this morning, Friday, 17 May.

“I don't think there’s anything wrong with the form; they can all gallop in Class 2, so if you can win one of those while you're making progress it’s a pretty good sign.”

There wasn’t much that was handsome about Champion’s Way’s run through the first 1000 metres of his latest race - a wet track 1400m Class 2 in mid-April - as Joao Moreira scrubbed and nudged to maintain a position. But there was beauty indeed in his willing acceleration down the home straight, setting Good Standing four lengths off the turn and galloping by to a length and a quarter win - ears pricked at the line.

Size steps the son of Hinchinbrook to 1600m for the first time in the Class 2 Sports For All Handicap.

“It’s an interesting way to go; he didn't travel very well at the 1400 last start so hopefully the mile is suitable for him,” he said.

“I thought it was the ground, I thought he might have been struggling on the wet track to travel properly but in the past he has shown us that he needs a bit of encouragement to get into his work. Maybe that’s not a bad thing so we’ll see how he progresses and gets a rise in class and longer distances.”

Hong Kong’s 10-time champion trainer is in pole position in the defence of his title, holding an eight-win lead over Frankie Lor and John Moore with 16 race meetings to go.

“I’m always looking over my shoulder: the competition gets tougher and tougher every season,” he said. “The number of wins or the lead can change very quickly so I’m just going to put my head down and keep trying to win a race and see if I remain in front.” 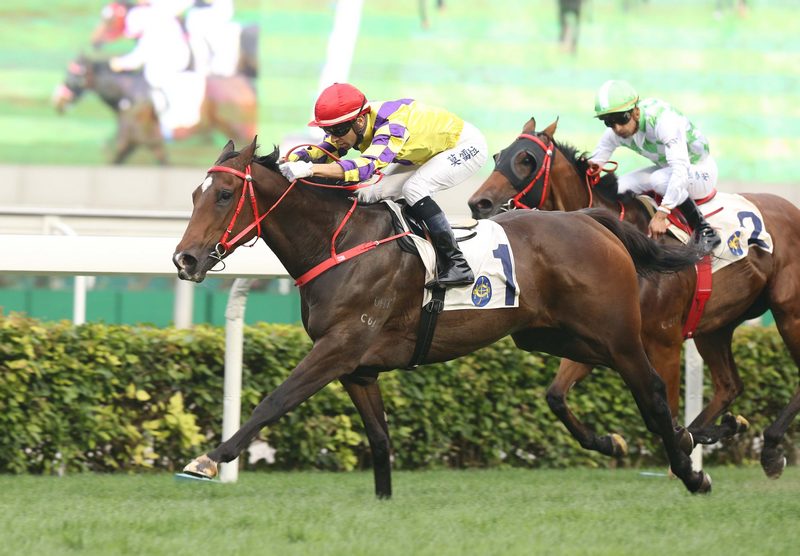 Lor will try to scupper Champion’s Way’s streak with his own talented prospect Right Choice (122lb). The four-year-old is also seeking a sixth win, having won five from seven this term, but will need to bounce back from a well-held third behind Ka Ying Star at the course and distance last start.

Umberto Rispoli was in the plate for the first time that day and has faith in the Mastercraftsman gelding’s ability.

“He’s a very consistent horse, he’s gone up in class race by race, he’s a very tough horse and he’s honest. It’s always tough competition in Class 2 at a mile but the horse is fit and well so with a good draw (2) he will run a good race,” he said.

“I have a lot of respect for Champion’s Way because he showed that he’s a very good horse and he’s going to be the favourite in the race. They are two horses who have improved a lot. I reckon it’s going to be a very nice race to watch. The best horse will win the race and I think every horse in the race has a chance, it’s all about the position they are going to be in after 200 metres.”

Moore has expressed his intention to have all guns blazing in his attempt to seal a seventh Hong Kong premiership. But the handler will have to hit the mark more than he misses if he is to make up the deficit on Size.

The handler’s Uncle Steve was unlucky in the run when sixth last time and champion jockey Zac Purton is hoping to make amends in the Class 3 Age-Friendly City Handicap (1600m).

“It’s not a replay I’ve gone back and watched; I’ll keep that one in the archives and bury it in a dark place,” Purton said. “It is what it is: unfortunately I had no room all the way up the straight. I just had to sit on him.

“The run wouldn’t have hurt him, he’s come through it in good order; the step up to a mile, I don't see that as a problem and he looks as if he’s ready to go and get the job done now.

“He is a horse that has travelled up well behind them in the past and when you’ve let him go he hasn't produced, so you can never be sure if he was going to go and get the job done or not but he felt like he had a little bit more there.”

Purton and Moore have combined for 20 wins this term - including Beauty Generation’s eight.

“His stable has been going well, he has a lot of nice horses coming through the grades and I seem to have been the beneficiary of getting on them at the right time. He’s pushing for the championship; he’s going to need every winner he can get so hopefully I can keep helping him tick along,” Purton added.

Chris So’s charge is another bright young prospect and aims for a hat-trick at start four. Regan Bayliss maintains the partnership after driving the three-year-old to a neck success last time over Racing Fighter.

“He beat a quality field and the form’s been franked with Racing Fighter coming out and winning on Wednesday night,” the Australian hoop said.

“I’m happy the way he’s going, he’s had a trial in between, he’s been ticking over lovely and he’ll make his presence felt, for sure.”

Mr Croissant trialled over 1050m on the all-weather 10 days ago and passed the post an easy short-head to the good.

“It was a lovely trial, I just let him relax early and once I brought him to the outside and he changed his lead leg he really was strong the last little bit,” Bayliss said. “He’s a nice horse on the way up and he keeps improving with each piece of work so I’m looking forward to riding him.”

The opposition includes the Lor-trained and Purton-ridden Big Party (124lb), impressive when winning his first two starts but a seemingly below par fifth behind Mr Croissant last time.

The 10-race card will start at 1pm with the Class 5 Diversity In Education Handicap (1200m).