Promising sprinter Sure Will Do comes off a three-month break this Sunday at Kranji with trainer Stephen Gray not expecting sparks straight off, but certainly a step in the right direction from whatever he does.

That is in contrast to his last start when a wave of silent hope rode on the Per Incanto four-year-old’s bold bid in the Group 1 Lion City Cup (1200m) on April 24, even if the massive leap in class from Class 4 to take on the big boys at level weights was on paper a daunting task, not to mention the horror gate.

Those hopes resting mainly on his raw ability to still overcome those hurdles were unfortunately not realised, heart-breakingly for his endearing owners Mr and Mrs Chen. 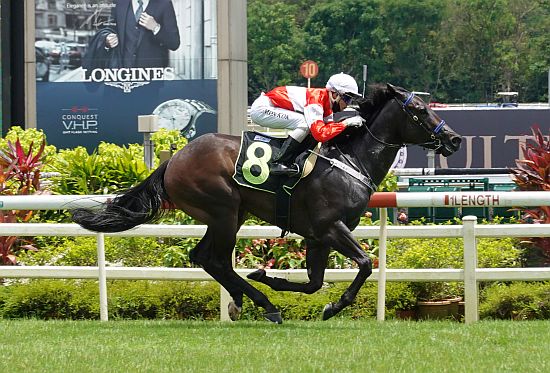 Sure Will Do makes his racing comeback in the penultimate race on Sunday, picture Singapore Turf Club

Trapped deep in the rear division under Oscar Chavez throughout, Sure Will Do never threatened in the home straight and ran last, 10 lengths off the winner Lim’s Lightning.

They came, they saw but didn’t conquer. All that was left was to regroup and live to fight another day.

That day has come up in Sunday’s penultimate race, the $70,000 Class 3 race over 1200m where he will reunite with his exclusive winning partner, two-time Singapore champion apprentice jockey Simon Kok Wei Hoong. Gray was, however, treating the race more as a kickoff point.

“The Lion City Cup wasn’t the race he should have run, but in saying this, to be fair, Mr and Mrs Chen were keen on running him,” said Gray.

“He wasn’t handicapped to run such a race, but there was no other race for him. He was buffeted around and had no luck out wide.

“I’m glad Oscar Chavez didn’t knock him around when he knew he was already beat. It didn’t quite work out, but he’s a very promising horse, and I’m sure he will go forward.

“He trialled very well last week (July 22), he had a good blow, and he’s going into the race fit and well.

“Unfortunately he’s drawn out (barrier No 11). It’s a nice race and he will improve from whatever he does, heading towards other races.”

“After this freshen-up, I’m sure he’ll improve a lot, and we’ll then pick another race for him as he goes through his grade towards Class 3,” said Gray.

“We may then look at the Merlion Trophy at the end of the year. He handles the all-weather very well, but he’s also very capable on grass.

“The Chens are very good owners and good supporters of our racing and the feature races. The Merlion Trophy is the only race Sure Will Do can go for, which is quite amazing considering there are more sprint races here.”

Gray may even saddle a second runner in the Polytrack sprint which was not too long ago the first Leg of the now-defunct Singapore Sprint series, and is this year downgraded from Group 2 back to its Group 3 label last annotated in 2015 when El Padrino won, but unlike Sure Will Do, the less one-dimensional Kharisma may have a few more options.

The Mossman four-year-old is returning from his failed bid at his first mile test in the Group 2 Stewards’ Cup on July 3. While the third place to Mr Malek ruled out any hope of pressing on towards the Singapore Derby (1800m) last Sunday, incidentally captured by stablemate Hard Too Think, Gray is not putting a line through another mile feature.

“I’ve kept Kharisma fresh since the Stewards’ Cup. We didn’t go for the Derby because of the distance, he would have found it harder against Hard Too Think, anyway,” said Gray.

“The Group 1 Raffles Cup comes up soon (September 18), too, but it’s over the mile. I may still run him, we’ll see how he goes this Sunday.”

Singapore Derby-winning jockey Marc Lerner was aboard the Indonesian-owned Kharisma in the Stewards’ Cup, but it’s three-kilo claimer Iskandar Rosman who is handed the reins this time.

“Kharisma’s coming back to 1200m, and I thought a three-kilo claim would give us a bit of a chance,” said Gray.

“And also, almost all except the topweight (Grand Koonta who has champion jockey Vlad Duric up) will have a claimer on. This boy (Iskandar) rides good.”