Reflections on The Everest Day

The famous phrase from former commentator John Tapp of ‘It’s history at Randwick’ rang true once again on Saturday when the three-year-old colt Yes Yes Yes defeated a class field of 10 Group 1 winners and a fellow Group 2 winner in the 2019 renewal of The TAB Everest (1200m) at Randwick.

Billed as the richest turf race in the world, the $14 million extravaganza invitation race attracted 40,912 patrons to Randwick and the course coped admirably with that number.

Nevertheless the severe industry criticism of the week from a ABC documentary on abattoir slaughter of racehorses was just below the surface with industry participants.

Ironically the sheer size of the prizemoney on offer at the meeting, which included three $500,000 support races, might just have steeled industry leaders to immediately put into place a code of conduct and industry practices to ensure such vision of our industry is ever shown again.

Over the coming weeks many more millions of dollars will be raced for and won in both NSW and Victoria. This industry is wealthy enough throughout the country to immediately declare that no thoroughbreds, indeed horses, will be placed in danger of an abattoir death. On Friday this industry platform published numerous statements from industry bodies on their abhorrence of what the ABC uncovered, it is now time for industry leadership to come forward on a national basis.

The Everest has certainly claimed it fair share of attention through the country and internationally. The ownership of the 12 slots has brought rivalry from far and wide, as well as not leaving out the syndicates made up of anyone who wants to be involved. Australia presents a unique ownership base of the everyday person on the street with an industry interest to multi-millionaires with significant resources.

Chris Waller might have thought that post-Winx that the race track triumphant might step back a notch to ‘mere’ black type winners and yet another Sydney premiership. No such thing as they Rosehill based trainer convinced the ownership group of Yes Yes Yes, including Coolmore, that their three-year-old Rubick colt was up to taking on the country’s very best sprinters. 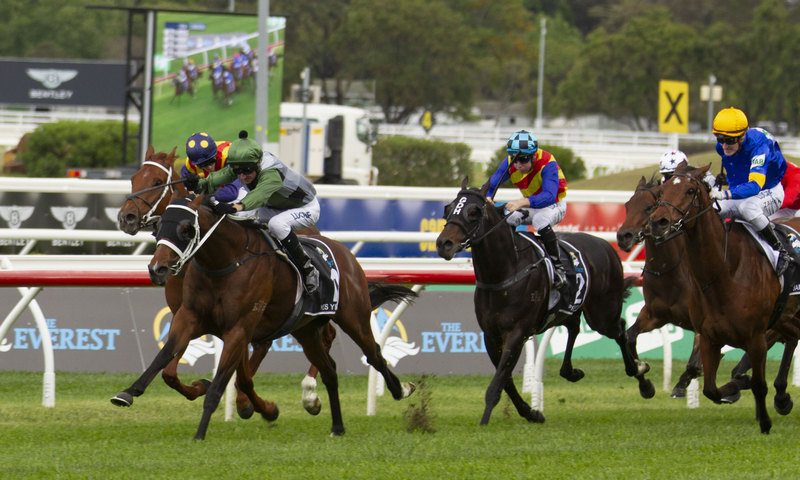 Yes Yes Yes and Glen Boss are out in front and the rest chasing for the placings, picture Sportpix.com.au

Under the weight-for-age scale Yes Yes Yes carried 53kg under Glen Boss while the leading sprinter of the land Santa Ana Lane had 58.5kg. A considerable difference, but Yes Yes Yes has started just seven times against his own age group and certainly not before 40,000 plus patrons. The combined experience of the rest of the field is vast and impressive. The colt needed his advantage stacked up against the field.

In the end he was simply too good showing race maturity beyond his years as Boss rode a perfect race and Yes Yes Yes had a turn of foot under his weight that could not be matched. The winning margin of a half-length and final 600m of 33.64 franked the win.

Ironically the only other runner not to have won a Group 1 was Classique Legend and if there was an unlucky runner it was Les Bridge’s Not A Single Doubt four-year-old who was turned out with his owners colours in ribbons on his mane. The ribbons so nearly featured in finish, but for a wall runners in front of Classique Legend with Nash Rawiller waiting patiently for a gap that did not appear until  too late. Classique Legend was sixth and there is much more to come from the dashing grey.

There is a true sign for a race of the billing of The Everest, the jockey’s room empties with those not riding not content to watch on broadcast screens. They come out and head across the track to watch from the inside as their 12 colleagues battle for vast sums of money. The rest of us watched from the other side of the track, the camps of Redzel in their red and Pierata with their red and yellow ties reflecting Greg Hickman’s colours, their cheers for their favourites as they paraded past.

Josh Parr on Trekking took it all in surveying the crowd as he and the appropriately named Street Cry gelding went out. Both Parr and Trekking were totally focused once the action started, shuffled back early they were 11th at the 400m and finished just under a length from the winner, more like flying than Trekking.

Before the start of the race the wind picked up and grey clouds appeared over the course to ramp up the anticipation impact as if it was needed. Then it all happened and Boss was celebrating as only he can. It was only two weeks ago that he and Kolding (NZ) claimed the Group 1 Epsom Handicap at the same course. It has literally been a climb back for Boss after sojourns elsewhere and what a way to return to Sydney. 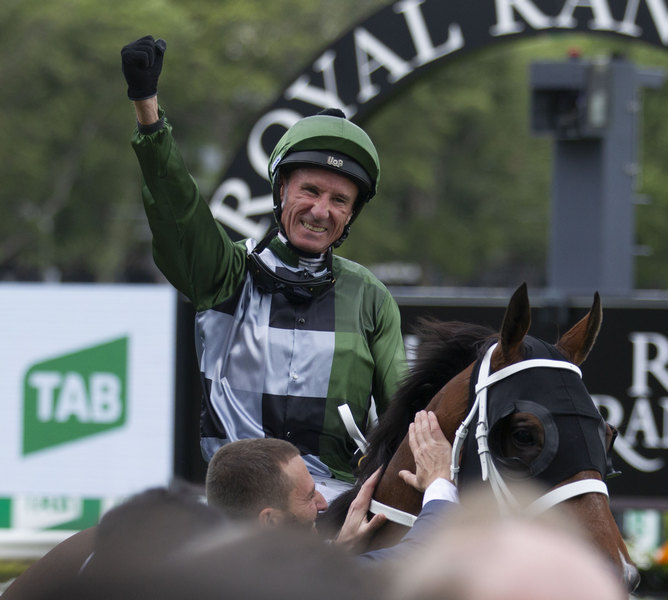