The weekend for Coolmore and partners commenced at Rosehill on Saturday with two black type wins and carried on in a tour deforce to Newmarket and the Curragh with two further black type wins including Tenebrism in the Group 1 Cheveley Park Stakes at Newmarket.

While the breeding and racing colossus did not win the Group 1 Golden Rose (1400m) at Rosehill, Newgate and their partners did with In The Congo, they swooped with I Am Invincible colt Home Affairs in the Listed Heritage Stakes (1100m) and American Pharoah colt Head Of State in the Group 3 Gloaming Stakes (1800m).

Nash Rawiller must have read the results of the earlier races with two final 600m sectionals under 34s on the Good 3 track with a tail wind down the front straight. Home Affairs is used to speed and being on the pace, he won the Group 2 Silver Slipper Stakes over 1100m after tracking the leader, ironically under James McDonald, so Rawiller went one better and set the pace from the front.

McDonald on the favourite Paulele perhaps missed the early results. While Rawiller from barrier nine went forward McDonald from barrier ten went back and the race was lost. Paulele was sixth at the 400m and the Dawn Approach colt was left with task of catching the leader who stopped the 600m at 33.34. 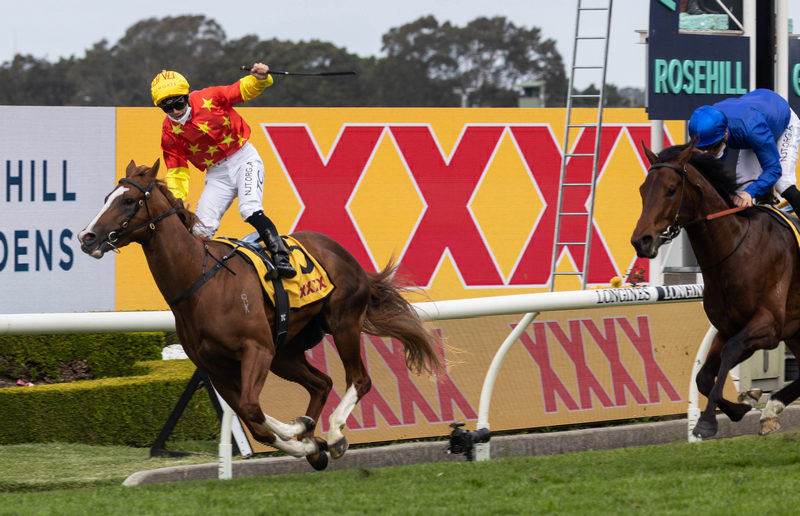 Tim Clark salutes on In The Congo and James McDonald reflects on Anamoe, picture Sportpix.com.au

Essentially the Golden Rose was the same result. Tim Clark had a rock hard fit In The Congo prepared to the minute by the Waterhouse and Bott stable and when Clark suggested to Gai Waterhouse in their Saturday morning tactics call that he might go to the front and have a breather, he was firmly told to not have a breather and to keep going. ‘It might win you the race’ Waterhouse said to Clark, it did.

McDonald on the $1.90 favourite Anamoe once again settled back. Crossing the top McDonald had Anamoe some 9L from the flying leader, seventh at the 400m and once again Anamoe showed he, along with Paulele, is a very good colt, however, when In The Congo ran a new race record of 1.21.46 racing on the rails, Anamoe had an impossible task racing wide and in the middle of the track.

In The Congo displayed his toughness and that he had more gears than pure sprinting, which this columnist admits to thinking was his forte, and he deserved the Rose’s, bunches and bunches of them for the pedigree page. Clark was clockwork to the faction of a second as usual. Well prepared, well ridden.

Then it was Head Of State’s turn, this time with McDonald up, in the Gloaming Stakes and it was an important win for Coolmore who stand American Pharoah. Head Of State goes forward to the $1m, Group 1 Spring Champion Stakes (2000m) at Randwick on October 9th for another important test for the colt and his sire.

Godolphin’s weekend did not get too much better when Coroebus was beaten by a fast finishing Royal Patronage in the Group 2 Royal Lodge Stakes (1600m) at Newmarket – the replay is worth a watch here – however it was soothed a little by Bedouin’s Story in  the Cambridgeshire.

Next week it is onto the Epsom Handicap meeting at Randwick with seven black type races. Naturally there is rain forecast during the week, it is Randwick after all, but not enough to have a material impact and there is a good week of anticipation for what is ahead.