What a difference a crowd makes, a maximum allowed 10,000 patrons at Randwick on Saturday took it upon themselves to sound like 20,000 as Sydney racing welcomed crowds again after the recent virus restrictions were lifted from, first a potential 5,000, and second to the 10,000 limit. The outcome was Randwick rocking for TAB Everest Day.

There were some ongoing crowd restrictions, which from Monday when the 80% fully vaccinated threshold lifts them all again to a near normality, however, it meant little to the day.

Randwick racecourse bugler Bob Bouffler is a master of ceremonies and building crowd participation. Usually he is closer to the fans for personal impact, but from his small stand also used for the trophy presentations surrounded by camera crews and microphones Bobby had the crowd chanting before the off of each race. The patrons might not have been on-course for some three plus months, but they had not forgotten Bobby’s call and zoom up and down the scale.

Then Tommy Berry set them all off on another climb after he won The Kosciuszko with Art Cadeau. Berry brought Terry Robinson’s five-year-old Artie Schiller gelding back along the fence and the crowd went wild. The music boomed out across the course, unsaddled runners trying to return to the Race Day Stalls were spooked, bedlam. Fortunately the music stopped before any harm to horse and human, however, the atmosphere remained.

The aptly named Big Parade under Josh Parr won the Group 3 Sydney Stakes (1200m) in a fine acknowledgement of Mark Newnham’s training skills. Newnham attributed the five-year-old Deep Impact’s progression to gelding, but there is a patient approach to Newnham’s preparation that is yielding significant results with Big Parade.

Meanwhile the crowd showed complete impartiality and turned their attention to the broadcast screens to roar on Godolphin’s Colette in the Group 2 Tristarc Sakes (1400m) at Caulfield. Not for them the tacky political outbursts from the southern State’s politicians over the superior NSW vaccination drive.

The Group 1 winner heard and responded to Damien Lane, later fined for overuse of the whip, to overhaul the field and win in a fine effort considering the Hallowed Crown mare is being trained for 2000m. The weather will determine where Colette races next.

Satisfied with that lift the crowd refuelled and reloaded wagers for the big one, the TAB Everest, in which they were assisted by races being behind start times at Randwick, surely not to build the pools one could ponder.

The crowd roared for the singing of the national anthem, gave James McDonald rock star adulation as he came out of the tunnel with Nature Strip and kept the sound levels going through the preliminaries and, eventually, the start of the $15 million dollar race.

All before had just been a warm up, a clearing of the throat after all those weeks at home, for the reception that McDonald and Nature Strip received as they came back along the outside fence. The arms were raised outwards in unison to the winners and then the music boomed out from the speakers.

Fortunately it was stopped as once again the returning runners were going nuts with the noise and crowd with millions of dollars of horse flesh not knowing where they were going and what was happening.  There was a short pause as the rest of the field returned to the Race Day Stalls and then it was time to rock again and complete the verses of Sweet Caroline.

Racing was back in the Harbour City and it was self-evident that there had been a thirst to be back on-course.

It was a clever ride by McDonald to secure the win with Nature Strip, surely the world’s best turf sprinter at the moment. They were out in front on their own without the harassment of another runner. Then they took a vital margin over the chasers over the hill passing the 400m and it was enough at the line.

Masked Crusader and Eduardo were coming mighty quickly over the final 50m and Nature Strip was feeling the early pressure as he was entitled to, however, that early margin enabled them to reach the top of the mountain first.

The crowd absorbed it all, and the racing too. 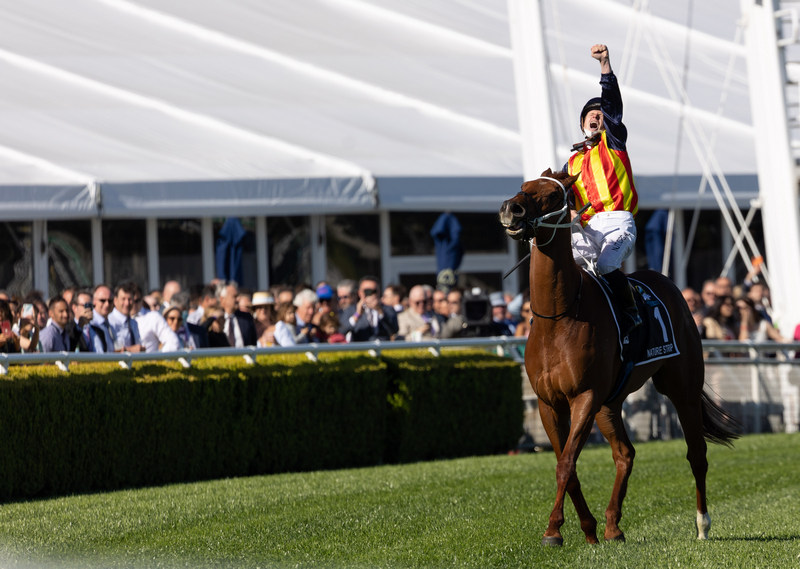