Trainer Shane Baertschiger is plotting a path towards the Singapore Derby for Red Ocean following the bold frontrunner’s quick return to winning ways in the $70,000 Kranji Stakes C race over 1600m on Saturday.

The Group 1 feature over 1800m, to be staged this year on July 17, was a bit of a no-brainer as the ultimate goal for the Ocean Park four-year-old after his three all-the-way wins over 1400m last year, especially at the last one in Class 4 company on November 6, visually the more impressive in the way he bolted up by more than five lengths.

Red Ocean, however, blotted his copybook at his last start in a Kranji Stakes B race over 1600m where, in a small field of only eight runners, he ended up in no man’s land four wide throughout before he eventually knocked up to finish a long last. 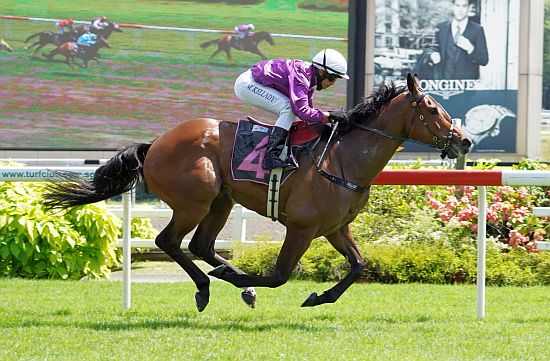 Baertschiger was prepared to forget he ran that day, as did punters as evidenced by his short quote as the $9 favourite, even if stablemate King’s Command’s withdrawal due to colic reduced the field to only five runners – often a graveyard to top picks.

Unlike his last-start faux pas, Red Ocean was the only speed influence this time, not to mention he also drew better in barrier two, whereas he had a gaggle of on-pace speedsters kicking up on his inside from his wide alley at his last start, that never gave him a chance of coming across or tucking in for cover.

The two races would turn out to be like night and day.

As expected, the lead was secured easily on Saturday, after which jockey Matthew Kellady slammed on the brakes and Red Ocean duly dropped his head and put his rivals to sleep.

On Line (Marc Lerner) tried to wake up early, but the moderate midrace sectionals had him on the backfoot while next danger Special Ops (Zyrul Nor Azman) was scrambling to extricate himself out of a pocket on the fence.

Upfront, Red Ocean easily shook Vittoria Perfetta (Saifudin Ismail) off upon straightening, and under hands and heels urgings, except for a few late taps as a reminder, he never faltered. The winning margin was 2 ¼ lengths.

Special Ops was given every chance to take a gap and challenge when it presented, but stayed one-paced to just snatch second place from On Line by a short head. The winning time was 1min 37.71secs for the turf mile on the Short Course.

“He runs his best races when he bowls along in front. Today, he jumped straight to the front and the race was pretty much all over midway,” said Baertschiger.

“At his last start, things just didn’t go his way, and I was confident he could bounce back today. He had the race won from a long way.

“I think he still has got some improvement in him. I’ll probably give him a month off now.

“He’s my Derby horse and I’ll now get him ready for that race.”

In nine starts, Red Ocean has now chalked up a smart record of four wins for more than $150,000 in prizemoney for the MA Racing & Hi Vis Stable.

Baertschiger reported that King’s Command’s colic was just a blip which the talented Tavistock five-year-old has fortunately already set aside.

“It was luckily just a mild colic. He was okay the next day,” he said.

“We won’t see him till February, and depending on how he goes, I may look at the Kranji Mile for him.”

The Group 1 Kranji Mile (1600m) has been slated as the first feature race of the Singapore season this year, with the $1 million showpiece scheduled on May 21.

King’s Command last raced in the Group 1 Singapore Gold Cup (2000m) where he gave too big a start, and could only run on tamely under apprentice jockey Simon Kok Wei Hoong for eighth place to Lim’s Lightning despite the eight-kilo pull in weights.

“He drops back but he was not well ridden last start, he was too far back. With only 50kgs on his back, he should have been closer in midfield,” said Baertschiger.