Going back-to-back is a dime a dozen in racing, but to earn it in the highlight race at either end of an unscheduled three-month break triggered by a deadly virus not many had heard of a few months earlier, that would be the offbeat feat Skywalk will attempt to pull off this Saturday.

James Peters’ game sprinter got up in a Class 1 Polytrack race over 1200m on April 3, rounding up his record to nine wins, six placings in 26 starts and nearly $700,000 in stakes earnings for the China Horse Club.

But without taking anything away from such a smart run and record, what went down in racing history that Friday night was it was to become the last meeting before Singapore racing was for the first time in its 178 years of existence cut short by a pandemic, the COVID-19. 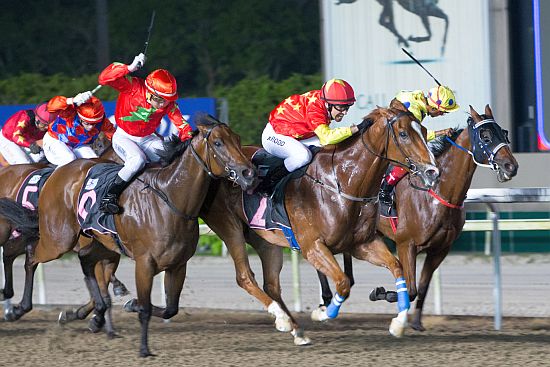 Much has been said about the shutdown and its abysmal impact, but it’s time to pick up the pieces, even if the extent of its ripple effect is still not fully known.

Fast forward instead to the much-awaited return of racing (behind closed doors) this Saturday, which will see Skywalk try and loop the loop in the $100,000 Class 1 race over 1200m on Polytrack.

Besides the stiff opposition made up of the likes of Countofmontecristo, Fame Star and I’m Incredible, Peters also cautioned that the circumstances before and after the Circuit Breaker are not quite the same for the Battle Paint six-year-old.

“I would have preferred a shorter race for Skywalk first-up,” said the British trainer who currently sits in 14th place on seven winners.

“After the long absence, because he’s such a gross horse, the 1200m on Polytrack might stretch his fitness and stamina.

“But we managed to get two trials into him. He’s as fit as we can get him.

“I was very happy with the two trials. He looked good and is close to his last racing weight, at least it’s very similar.

“Straight after his last run, which was on the last meeting here, we gave him two to three weeks off. But then came the lockdown, and to be honest, it was very difficult to train him with no training programme.

“We didn’t know how hard we could push him with no programme, and then, when they said we would restart, that 1200m race fitted in perfectly.

“It’s just that we had to rush him to get ready, but I’m aware everybody is in the same boat, it’s just the way it’s worked out.”

It’s three-time Singapore champion jockey Vlad Duric who will ride Skywalk this Saturday, a combination that paired up five times for two wins, both in 2018.

“Vlad actually rode Skywalk at his second-last start (third to My Dreamliner) before Michael Rodd won on him at that last start,” said Peters.

Besides Skywalk, Peters saddles six other runners over the 14-race programme, including two newcomers – Just Stars and Frey - and a class-dropper in Mr Hooper.

“Mr Hooper has benefitted from the time off during the break. He’s getting back to Class 4 and with my apprentice jockey (Mohammad) Nizar on, that will take off three kilos,” said Peters of the Shamexpress four-year-old who has not scored beyond Class 4 at his four wins.

“That should bring him in at a nice racing weight (56kgs). He’s down in grade, but a lot will depend on how he jumps.

“If he jumps well, he’ll put himself right into the race, but if he fluffs his lines, it makes it harder for him.

“As for the two newcomers, Just Stars was ready to go before the shutdown, but we had to back him off and we have brought him along since, he will need the run, and his fitness will improve from that first race.

“I’m pretty happy with Frey. I haven’t had the time to see his race, but he seems to be a nice horse.”

An unraced three-year-old by Zoustar, Just Stars, who is also raced by the China Horse Club, will make his Kranji debut in the $75,000 Restricted Maiden race over 1100m (Race 2).

Frey, who will race four events later in the $20,000 Open Maiden race over 1000m, is a French-bred three-year-old by Olympic Glory, who has, on the other hand, already had some race experience under the belt, of the Polytrack sort for good measure. He ran once as Holy Olympic in Dundalk, Ireland, on the same synthetic surface and ran a creditable third in a 1000m speed dash.

He is raced by a new outfit created by a group of local owners who are not new to the game, though, having raced other horses at Kranji under a different banner. Named the Princeton Stable, it has two Irish-bred three-year-olds with leading trainer Michael Clements, Tigarous and Balor, who trialled before the Circuit Breaker, but have not raced yet.

Both of Peters’ newcomers will be ridden by South African jockey Juan Paul van der Merwe.