The change in conditions of a 1200m race from Class 1 to Kranji Stakes A level this Saturday has prompted trainer Steven Burridge to bring Lim’s Craft back to the races much sooner than anticipated.

After the Smart Missile five-year-old came from last to run third to Sincerely in the Class 2 event over 1400m last Saturday, a quick scan of the racing programme to the first quarter had Burridge prepared to leave Lim’s Craft in his box for a while before a suitable race comes up – at least not before March.

But with a $100,000 Kranji Stakes A race over 1200m suddenly popping up on the handicaps this week was an opportunity too good to be missed, so long as his last race had taken nothing away from him. 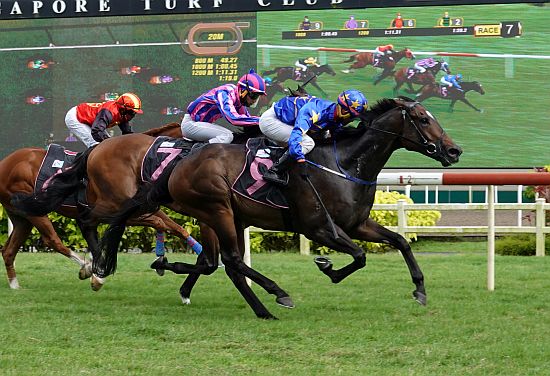 “There was no plan to back him up, as there was nothing for him after his last race. He was ineligible for a Class 1 race, but after they changed it to a Kranji Stakes A, I entered him,” said the Australian handler.

“If he eats up tomorrow and looks okay, we will accept, but he seems to have pulled up well.

“From the outside barrier (No 14, last Saturday), we had to go back as he’s not really good at the barriers, he has mediocre pace. We informed the Stewards we would ride him quiet and ride him for luck.

“He had a good run through. He would have got a gut-buster if he had gone around.”

Taking a drop at the rear is nothing Lim’s Craft is not familiar with.

The Lim’s Stable galloper has won his five races (1200m to 1400m, all on turf) by being ridden negative, anyway, except for his second-last win in a Kranji Stakes A race over 1400m at Kranji’s last 2020 race meeting on December 27 when he was ridden closer to the pace, but still quickened off nicely to score.

“There were only seven runners that day, so he was closer, but he normally gets back in any case,” said Burridge.

“He’s only got a short run, and Oscar Chavez rode him all right. If he runs this Saturday, Oscar will ride him again.”

Burridge doesn’t have a senior freelance jockey he uses more often, but will soon be able to again rely on the able hands of his two-time Singapore champion apprentice jockey Simon Kok Wei Hoong.

Kok, who has missed all the 2021 riding action thus far, given he was in Ipoh to attend to urgent family matters, returned to Singapore on Monday, but unfortunately with the sad news his grandfather had passed away.

“Unfortunately, Simon’s grandfather passed away last week, but at least, he was able to see him and spend his last moments with him,” said Burridge.

“He’s now begun his two-week quarantine, and should be back riding in races from the first meeting in February (7).

“While we wished it had been under different circumstances, the trip to Ipoh has given Simon the chance to get away from here for a while, and freshen up.”

In his absence, it’s his 2020 runner-up Hakim Kamaruddin who has benefitted the most with four winners to sit on top of the ladder, two clear of Iskandar Rosman.