Race not ideal, but still all Heart

If jockey Louis-Philippe Beuzelin had any niggling concerns about Big Hearted in the $85,000 Kranji Stakes B race over 1400m at Kranji on Saturday, they were the pace - or lack thereof - and the steadier of 59.5kgs, but in the end, sheer class saw the 2020 Singapore Gold Cup winner come through without much ado.

Given the smallish nine-horse field in a seven-furlong event, the French jockey felt a muddling-run tempo would be exacerbated further by the top impost.

But as it turned out, the Hallowed Crown four-year-old allayed those worries with a superior display that showed the next level he has gone to since his Singapore Gold Cup heroics in November. 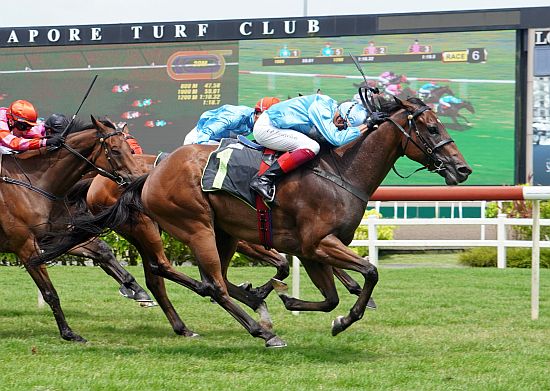 After a moderate jump, Big Hearted was parked midpack – not too far adrift as is his regular routine but not too far ahead either, which would otherwise see him ridden even more upside down.

Noted frontrunners Augustano (Jerlyn Seow Poh Hui) and Passport To Rome (Matthew Kellady) didn’t muck around in front, with the pace not slackening at any stage.

In the box-seat, last-start runner-up Preditor (Danny Beasley) was in the zone, duly pouncing on the leaders, including stablemate Passport To Rome, upon cornering.

But the clear and present danger was hailing from the outside. Storming in with a big run, Big Hearted had the race shot to pieces when he punched to the lead at the 250m.

That was when Beuzelin’s second apprehension proved to be not totally unfounded. Hard ridden, Big Hearted could not quite put the race away under the 59.5kgs, and with stable companion On Line (Simon Kok Wei Hoong) weaving his way through with a sizzling run right on his hammer, the line could come up a fraction late, but it didn’t.

Running on courage as his name suggests, Big Hearted held his Falcon stablemate On Line at bay by half-a-length with Preditor a gallant third another three-quarter length away. Punted down to $9 favouritism, Big Hearted ran the 1400m on the Long Course in 1min 22.11secs.

“I was worried about the pace. If they stack up the speed, that could work against us,” said Beuzelin.

“But he had a good run throughout and he did it very easy in the end. He did feel the big weight in the end, but his class prevailed.”

Michael Clements’ assistant-trainer Michael White said the conditions of the race could be a death trap should they get their tactics wrong.

“My biggest concern was the Long Course E. That is often a graveyard for many horses,” said the Australian.

“If he gets back, he would need a bit of luck in a small field over 1400m. The temptation to ride him cold as is his pattern was there but we rolled the dice and decided to ride him closer to the pace.

“He probably got there too soon 100m out, but he had to be ridden that way, and Louis gave him the perfect ride.

“Once he goes up in distance in bigger fields, he can give them a bigger start again. On Line also ran a super race.”

While the Group 1 Kranji Mile (1600m) on May 22 is Big Hearted’s grand final, connections are not against the idea of another lead-up run.

“The original plan is to go straight to the Kranji Mile, as there is no real and proper race for him,” said White.

“But there is a Class 1 mile race in two weeks’ time, and depending on how he pulls up, we may look at that race for him.”

Big Hearted has now taken his sterling record to seven wins and four placings from 14 starts for prizemoney in excess of the $840,000 mark for the Falcon Racing No 7 Stable.