Quick Thinker bounces back to winning form in the Chairman's

Exactly 12 months after claiming the Australian Derby, Quick Thinker (by So You Think) returned to the winning ranks by landing the $300,000, Group 2, Schweppes Chairman’s Quality (2600m) on Day 1 of The Championships at Randwick in Sydney.

A 4-year-old entire trained out of New Zealand by legendary horseman Murray Baker and partner Andrew Forsman, Quick Tinker has very much been in the wilderness since posting his 3YO Classic victory on the same program last year, but looked back to something like his best when winning the major lead-up to the Sydney Cup.

In a race run at a very solid tempo on a Soft track closer to Heavy than Good, Quick Thinker relished his return to a genuine staying test and on a surface with plenty of give.

Put into the contest at the top of the Randwick straight by race rider Damian Lane, the son of So You Think quickened well to take charge of the contest without too much effort before basically out-slogging his rivals over the closing stages.

The John O’Shea trained Rondinella (NZ) (by Ocean Park) stayed on very strongly over the final 250 metres to give Quick Thinker a race all the way to the line.

The 6-year-old mare finished the race off in very determined fashion and put in a highly encouraging Sydney Cup trial, finding the winner a tad too strong but passing the post well clear of minor placegetter Paths of Glory (GB) (by Mastercraftsman).

After racing on the pace from the outset, Paths of Glory put in a sterling effort to hold on to third, a length-and-a-half in advance of the dour imported stayer Selino (GB) in fourth. 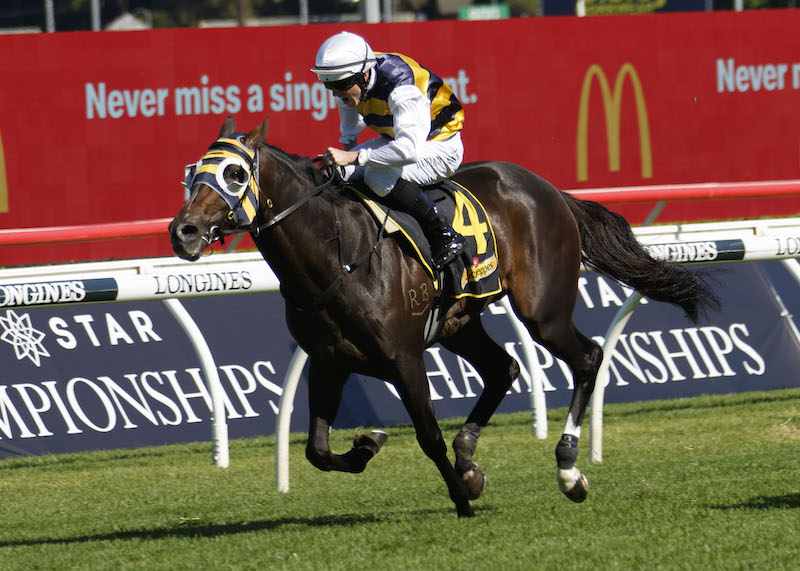 Speaking on behalf of the winning training partnership, Andrew Forsman was at a loss to explain why Quick Thinker had returned to winning form after a 12-month absence.

“I don’t know,” replied the Kiwi when asked about the form reversal.

“Obviously the track was quite testing. They were under the pump a fair way out there and he was still traveling quite well. Definitely the track conditions [Soft 7] have played into his hands.”

Forsman added: “He had a really searching gallop on Tuesday morning and he had a good blow after it. His gallop on Thursday was really good, and I thought that work gave us a bit of confidence going into it [today].”

Not surprisingly, Forsman confirmed that next week’s Sydney Cup is very much the 4-year-old’s No. 1 mission and has been since he commenced his latest campaign.

Winning rider Damian Lane was keen to give praise to the winner’s handlers.

“Well done to the team,” remarked Lane. “Obviously he hasn’t been at his best the last couple of starts, so it is good to have his form turn around when I got on him.

“You know with Murray [Baker] and Andrew [Forsman] that their horses are going to be fit, and with a genuinely run contest that really suited him.

“Because he has got early speed, I was able to put him in a good spot. The key was he relaxed so well. He just spat the bit completely in the run, so when it got tough late he still had a little bit left in the tank.”

Quick Thinker scored by a Head, with six lengths separating second and third.

Brenton Avdulla (Miss Sentimental): “I rode her to be strong late. I thought before the bend she was going to be in the race but she struggled late.”

Jason Collett (Collide): “Something is not right there.”

Robbie Dolan (Rondinella): “Had a good run. Just couldn’t get past the other one.”

Craig Williams (Selino): “Really pleased with his performance. He’s doing things more correctly with every race start in Australia especially this preparation. We tried to put him closer today. Had the right barrier but not the right horse to be closer. He stayed on extremely well. If he runs next week he will be a force to be reckoned with.”

Rachel King (Paths Of Glory): “Really good effort on a seven day backup and up in distance he ran a solid race.”