Zac Purton returned a favour at Happy Valley late on Wednesday night to keep Tony Cruz in the frame for the champion trainer title.

With front-runner Ricky Yiu enduring an evening of misfortune and his closest pursuer Francis Lui forced to settle for a pair of seconds, third-placed Cruz closed the gap when Purton steered Golden Spectrum to success in the finale, the Class 3 Conduit Handicap (1800m).

The nine-race action ended with Yiu static at the top of the permiership on 64 wins, one ahead of Lui, and Cruz on a creeping 61 with only two meetings – 20 races – left in the season.

“Tony picked this horse out for me after his last run to try and help me and as it turned out I could be helping him,” Purton said, having completed a double to extend his advantage in the jockeys’ premiership to a practically unassailable eight wins.

“It might be too late for Tony but he’s still going to come strong and his horses are always there to win – he certainly knows how to handle them and get the best out of them so you can’t underestimate him.”

Top-weight wasn’t enough to anchor Golden Spectrum (131lb); Purton got his mount rolling at the 500m point, grabbed control of the race off the turn and held the late-closing Lightning Steed (118lb) by a length.

Four and a half lengths behind was Yiu’s Toycoon (127lb), a luckless fourth, having lost roughly the same margin with a stuttering break from the gate. That followed an unfortunate incident at the start of the previous contest, when Yiu’s Eternal Harvest was withdrawn behind the stalls.

Purton might have the champion jockey title in the bag already but he showed no signs of easing off and initiated his brace with a front-running win on Next Model in the Class 4 Hatton Handicap (1000m). The four-year-old, having his fourth start since switching from the Peter Ho stable, was able to work to the lead without too much pressure from gate 12. The bay boxed on to a first career win by two and three quarter lengths. 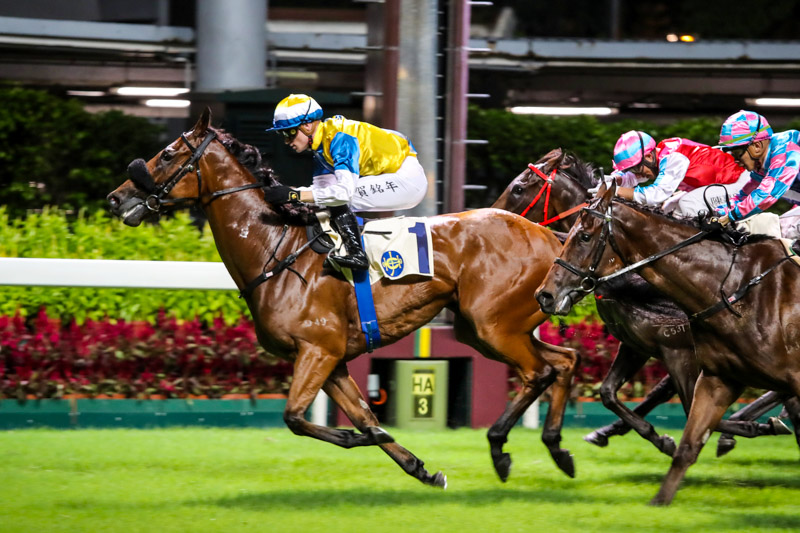 Douglas Whyte’s sixth career double took him to 42 wins in his first season with a trainers’ licence and the former 13-time champion jockey is having no regrets about hanging up his racing saddle.

“I thought I would miss the riding a lot more but I’m not at the moment, I’m enjoying watching. Night’s like tonight make a big difference,” he said after Xponential followed Happy Ichiban into the winner’s spot.

“I’m very fortunate that I’m able to ride them in their work and assess them and fix them to a certain extent. It’s been a very good learning curve, but more than anything I’m enjoying it like you cannot believe; just being around horses and working with them, it’s one of my passions.”

Xponential was a surprise 47/1 winner on debut at Sha Tin back in December and has taken a further six starts and a first outing at the Valley to figure things out and follow-up. The four-year-old flicked his ears and was clearly having a look around when he hit the front in section one of the Class 4 Kotewall Handicap (1200m), but did enough to hold on by three quarters of a length under Antoine Hamelin.

“He’s taught me a lot in the sense that first-up he won unexpectedly, there was pace on and he was at the back sleeping and didn’t know what he was doing, hence the reason he hit the line well – it was more like a barrier trial for him that day,” Whyte said.

“After that, there was a lot more pressure on him and more expectation on him to deliver next time and suddenly we started to ride a race on him and put more pressure on him, and he wasn’t ready for that. He’s a very immature horse, so I’ve taken my time, I’ve taken blinkers off, I’ve switched tracks with him, brought him back to 1200 metres, and it’s worked the oracle.

“I think 1200 metres is well short of his distance,” Whyte added, “but he enjoys the speed of a 1200 and hence the reason why I’ve brought him to Happy Valley.”

Whyte kicked off his brace in the opener, the Class 5 Pok Fu Lam Handicap (1650m), with Happy Ichiban. Vincent Ho drove the three-year-old to a dour first victory at the ninth attempt, wearing first-time blinkers.

“Mentally, he’s just needed racing and time,” the trainer said. “After his last run, where he was three-deep on the dirt, I learned that night that he just can’t handle pressure. He’s just too big for his own body and he can’t handle it, he’s only a three-year-old.

“I went back to the drawing board and played around with him – he’s his own worst enemy in that he has a boy’s mind and a man’s body. If I hadn’t put the blinkers on he’d have been second; I put them on just to help Vincent out first run at Happy Valley, to get him to position and travel, and Vincent said when he got to the front he still had a good look around.”

Ho nailed his own brace when he delivered the Frankie Lor-trained Supreme Plus (129lb) right on the line to pip Fox Cheunger (119lb) in the Class 5 Po Shan Handicap (1200m). The win denied his regular ally Lui a much-needed success that would have taken him to the top of the trainers’ premiership.

“Mr. Size talked really calmly before the race, he doesn’t make any jockeys nervous, he gave me easy instructions to follow and I felt confident when I went out,” the 5lb apprentice said.

“When he came out of the gates, I felt he was a really calm, strong horse and he didn’t disappoint me. At the turn I could feel he was taking me into it; I only had one target to catch and he did that pretty easily, he finished off really strongly.”

Caspar Fownes and Karis Teetan teamed to carry off the Class 3 Babington Handicap (1000m) with Explosive Witness, who opened his Hong Kong account at the 10th try.

Teetan made it two wins thanks to the Dennis Yip-trained Murray’s Partners in the Class 4 Lyttelton Handicap (1650m).