At this time of the spring, a mare like New Zealand star Probabeel (NZ) would normally be chasing the Group 1 action in weight-for-age races. But an early set-back meant she was not ready for those contests and her trainer Jamie Richards elected to follow a handicap path towards next month’s Cox Plate. 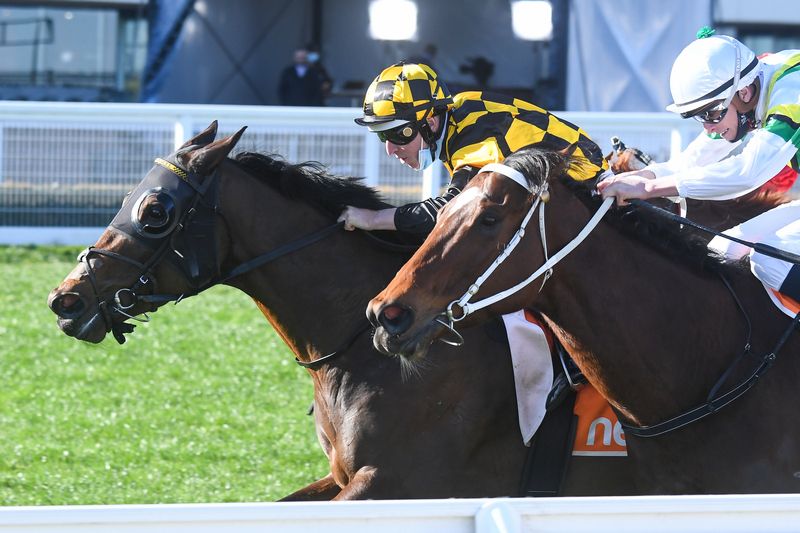 Probabeel just gets the better of Chassis to score first-up, picture Racing Photos

After a first-up win at Caulfield last month, Probabeel returns to that track on Saturday for the Group 1 Sir Rupert Clarke Stakes (1400m). It will not be an easy task for the daughter of Savabeel who will need to create a weight carrying record for a mare under the steadier of 57kg.

“She is a big, strong mare that has carried weight before,” Richards told RSN.

“It’s up to her to get out of the barriers cleanly and take up a forward position. Hopefully she can lob in the first six without having to do too much work and then get a little bit of luck from the 600 metres onwards.

“She’s as good as we can have her. Ashley Hanley, who has been looking after her for the last couple of years, is very happy with her.”

Brett Prebble, who shares the lead in the Melbourne Jockeys’ Premiership with Craig Williams and Damian Lane, rides Probabeel for the first time and has been book for the mare in both the Toorak Handicap (1600m) on October 9 and the Cox Plate on October 23.

“He’s riding in red-hot form and has given some good positive feedback on her, and seems to enjoy riding her,” Richards said. “Hopefully they can click well and get out of the barriers cleanly and enjoy a safe passage.”

Richards said Behemoth was the logical one to beat on Saturday despite having to carry 59kg.

“He can carry weight and he can sprint very well around Caulfield, but we did beat him in the Futurity,” Richards said. “Hopefully we’re at the top of our game, which I think we are.”