#9 Wonder Express is racing well with two top-three efforts from his past two runs. He draws well and gets his chance. #3 Light My Day is competitive in his spot and should relish racing in the grade below. He can turn his form around for Derek Leung. #1 Jiangxi Stamina is closing in on a first win. He’s disadvantaged by the hefty impost but is still expected to run well from gate two. #5 Lucky Missile mixes his form but does get the services of champion jockey Zac Purton.

#7 Mcmunigal was a solid winner two starts ago. Suspect he can offset the awkward gate under Alexis Badel and prove too strong. #2 Play Wise mixes his form but his run three starts ago for second over this course and distance was full of merit. #3 Ezra is solid on his day. He draws right and just needs a smooth run to be competitive again. #6 Nuremberg has found his feet in Hong Kong. Joao Moreira hops up and he shouldn’t be too far away.

#11 Millennium Falcon was awfully unlucky last start down the straight. Suspect with a clean run he could take plenty of catching. #7 Spicy So Good clocked a career-best third two starts before struggling at his most recent outing. He’s worth taking a chance on here to bounce back. #2 Lucky Quality is racing soundly. He can bounce back into form with Joao Moreira engaged here. #4 Nextmodel commands respect in what is a rather deep race. Don’t discount.

#6 Man Up steps out on debut for trainer Richard Gibson and jockey Chad Schofield. He’s shown a bit of class in his barrier trials and looks a straightforward enough prospect to perform well first-up. #3 Gluck Racer is a tidy sort. He won well two starts ago and has since performed nicely with a tidy third-placed effort. He just needs to offset the awkward gate. #1 Dragon Baby has plenty of ability and should be able to test this group from the favourable draw. #4 All Beauty also steps out on debut. He’s caught the eye at the trials and is not worth discounting here.

#9 Charity Fun logged a close-up defeat at his first try at G3 level last start. Prefer him over further but with no weight on his back and a slight freshen-up, he should be able to perform at his best at the bottom of the handicap. #1 Southern Legend is the class runner of the field. He’s done everything right leading into this and off the back of a tidy trial he is expected to peak. Slight concern about the heavy weight, however. #2 Columbus County notched up a classy G1 placing last start. Don’t discount. #6 Helene Leadingstar should get his chance from the front.

#7 Oscar Glory has a bit of class about him. He draws well, steps back up to the mile and rates as the one to beat. #2 New Future did well over the mile at his second try last time out. Suspect he can take another step forward with further improvement expected. #8 Robot Warrior is on the right track. He trialled well recently and should get a favourable run in transit from gate two. #6 El Jefe was game in defeat last time out. He’s racing well and should find some prize money here.

#8 Healthy Happy is racing well. He was narrowly touched off by Sky Darci at G3 level over the mile last start, however, this time he looks favoured with the step back in distance. #2 Sky Darci draws well and was a top-class winner last start as well as the start before in the BMW Hong Kong Derby. He’s versatile and is a proven type over this trip. #6 Rattan should be able to finish off as he has done previously. Getting up in trip should give him his chance. #5 Sky Field logged a classy G1 placing two starts ago. He gets his chance but doesn’t appear favoured by the rise in trip.

#2 Killer Bee is all class, especially after his ground-covering performance to score last time out. He can continue his winning ways here as a three-time winner from his four starts in Hong Kong. #1 Royal Pride is better than his record suggests. Don’t discount from gate two with added improvement expected. #5 Hurry Hurry Gain is a two-time winner from four starts in Hong Kong. He gets a nice draw and is expected to bounce back with Zac Purton engaged. #4 Dublin Star is after back-to-back wins. He draws well and remains in Class 3 which is a plus.

#12 Sea Of Life slots in light and finally draws a good gate. He has a bit of class and with even luck he is capable of taking advantage of his featherweight impost with Karis Teetan engaged. #9 Master Montaro is a big hulking galloper. He has a stack of ability and is favoured stepping out to his preferred distance. #2 Lucky Express also returns to a preferred distance. He draws well and only needs a clear run to be ultra-competitive here under Joao Moreira. #13 The Crown slots in light and just needs to offset the wide gate.

#6 Lifeline Vision is progressing well. He draws favourably following his close-up defeat last start at his third outing in Hong Kong. Suspect he’s ready to go on with it after a few acclimatising runs. #1 Heza Beauty is tracking well. He closed off nicely from well back in the field last start and with a closer run in transit this time, from gate five, he should be able to test this bunch. #5 War Weapon logged an impressive closing effort last time out over 1200m. He’s on the rise and his ability to finish off commands respect. #8 Maldives won well two starts ago. Don’t discount albeit in a deep contest. 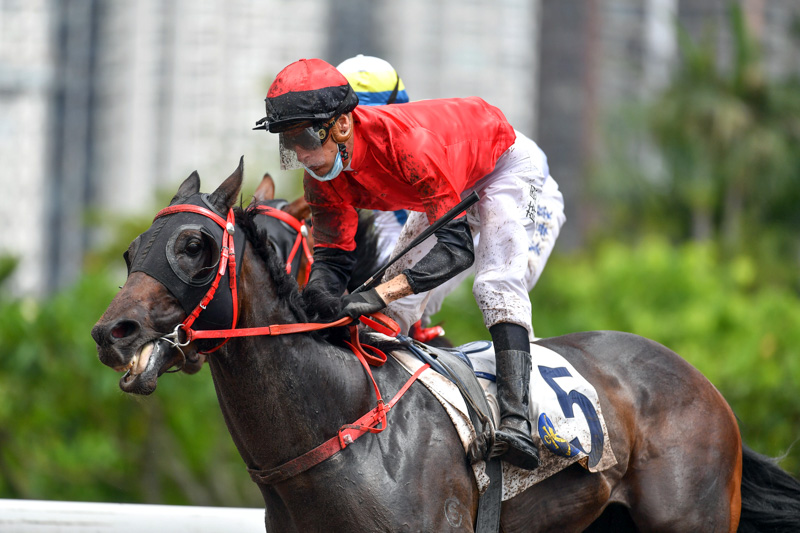