#8 Art Of Raw has had the benefit of the one run already this season where he sat on the speed and managed to cling on for a close-up second. He’s capable of going one better here and he gets his chance to do so from the good draw with no weight on his back. #2 Hay Run has been relatively competitive on the dirt before. His trial was ordinary but if he manages to use the inside gate to his favour then he isn’t without hope. #3 Good Runners Way has been freshening up at Conghua. He won first-up last season and following that he added one more win over this course and distance before stepping back into Class 5. He bears close watching with Zac Purton up for this assignment. #1 Sky Gem is yet to win on the dirt but still, can be competitive here.

#6 Double Take won with plenty in hand at his final run of last season and if he’s held his condition since then, he is worth taking a chance on. #1 Party Everyday is looking for the hat-trick of wins. He’s taken his racing to the next level and it wouldn’t surprise to see him continue his ascent up the ratings with a win here. #8 Lucky Win Win closed off strongly for third behind Party Everyday last start. He gets a decent swing in the weights here and from the inside draw, he should find himself in the thick of things. #3 Skyey Supreme hit his straps at the tail end of last season. He can figure.

#5 Valiant Elegance was well fancied on debut but could only manage seventh that day, beaten by over three lengths. Still, he clearly has supporters and his latest trial caught the eye, suggesting that he does have plenty of ability. #1 Fabulous Eight has the runs on the board. He tallied five top three finishes last term over this course and distance, including one win. He has the class. #2 United We Stand is second-up. He stretched clear by five lengths over this course and distance last prep, however, will have to do so this time in Class 4. #9 Regency Poet clearly has ability but just hasn’t quite be able to piece it together. He’s next best.

#3 Mr Aldan crushed his rivals by three lengths over this course and distance last time out and off that run, he rates as a leading player. Zac Purton takes the reins here and his latest trial should have him ready. #9 Ever Laugh is a five-time winner. He’s a classy veteran who is held in good stead by his race-experience. #6 Gift Of Lifeline steps into this second-up. He will have come on from that first-up run and it wouldn’t surprise to see him add a second course and distance win here. His latest trial was encouraging and he’s worth backing on a win and place line. #7 The Hulk can roll forward and make his presence felt.

Difficult contest this but although #4 Sure Win Win didn’t set the world alight on debut, he does have ability and probably deserves forgiveness for that run, especially as he didn’t look comfortable at any moment as he was crowded throughout. He’s worth forgiving. #2 Beluga is a horse on-the-up who is looking for back-to-back wins. He’s trialled well in the lead-up to this and with sharp improvement, he can take this out. #1 Monkey Jewellery has the runs on the board and is a consistent customer. The draw hurts his chances but he can’t be overlooked, especially with Joao Moreira up. #8 Excellent Chariot is talented and he appears ready to take the next step although this isn’t the easiest of starting points for his 2020/21 campaign.

#6 Happily Friends lines up off the back of an impressive trial at Conghua. He’s capable of rolling forward from the draw and in a tricky race such as this, he might be worth taking a chance on to pinch the spoils. #2 Scores Of Fun won well on debut last season and returns for this campaign looking to remain unbeaten. He was sound in a recent trial and he profiles as a typical PPG for trainer John Size who can string a few wins together. #9 So Awesome rattled into fifth last time out over this course and distance. He’ll be finishing fast. #7 Inno Legend looks like has more to give than his recent record suggests.

#3 Sumstreetsumwhere comes into this second-up after finishing third upon resumption this season. He has race-fitness on his side and with a quieter run in transit from gate seven, he’s capable of finishing over the top of them. #2 Ultimate Glory gets a welcome return to Class 4 where he is a three-time winner previously. #8 Party Genius is a horse on-the-up. He’s unlucky not have already won yet and if he’s held his condition from last season, then he’s a player here. #11 Viva Chef can find the front here and he rates as an excellent each way chance. He’s worth supporting on a win and place line as his front-running style of racing will afford him every chance.

#1 Beauty Spirit is consistent and won well in this grade over this course and distance at the back end of last season. He trialled well and this race looks well within his grasp. #7 Win Win mixes his form but should get the right run from gate one. He can figure. #11 Chevalier Prince is a horse on-the-up still. He steps into Class 3 for the first time which is difficult but he does still appear to have a number of ratings points up his sleeve. Zac Purton sticks with #2 Regency Bo Bo. He can’t be overlooked.

#1 Temple Of Heaven grabbed fourth on debut and returns for his second start here. He was a classy galloper in Great Britain trained by Richard Hannon and he appears to have acclimatised to Hong Kong with ease. He’s drawn well and is capable of spoiling the #4 Winning Dreamer party, who himself, hasn’t been handed the best of barriers. Still, he is a serious talent on the rise but he might be worth opposing here at his first attempt around a bend, especially if he is too short of a price. Still, even if he doesn’t win on Sunday it’s likely that his ascent up the ratings will still continue. #9 Ping Hai Bravo is a solid performer who can make his presence felt with Joao Moreira up. #11 Telecom Puma is better than his record suggests. He makes his seasonal return for new trainer Caspar Fownes and his best should see him finish around the mark.

#4 Lakeshore Eagle went to a new level at the back-end of last season with three consecutive wins and he returns here in search of his fourth. He’s drawn a touch awkward in gate 12 but he appears to still be on-the-up and he does possess a slick 1m 33.02s over the Sha Tin mile. #12 Easy Go Easy Win closed off strongly over an unsuitable trip first-up this term. This is a difficult test but he has run some solid races over this course and distance he does have the benefit of race-fitness on his side. #2 Savvy Nine couldn’t have been more impressive in a recent trial. He bears close watching. #10 Excellent Proposal needed to be at his best to win first-up and he’s going to need be at that level again from gate 14 of 14. Still, he’ll be finding the line late but the horror gate might be all a bit too much for him. 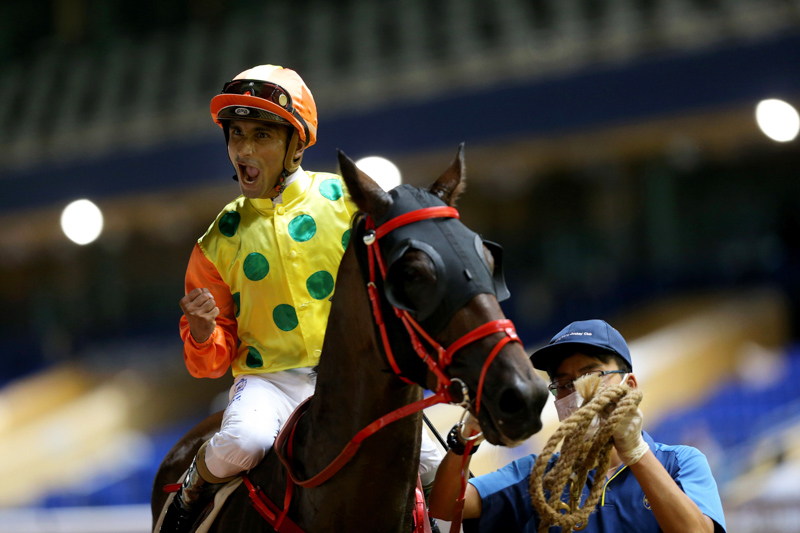