#7 Speedy Missile has shown glimpses of ability and now, breaking from the inside gate, there’s a chance they roll forward and take up the running. If so, he’s worth taking a chance on because he’s not completely lacking of ability and in Class 5, off his current mark, he can be competitive. #3 Bella Baby has been consistent across his 13-start career. He’s drawn a touch awkward but has shown ability, enough so to suggest that in this grade he is a winning chance. #2 Hurricane Hunter has proven himself as a two-time winner in Hong Kong and should relish the step back in trip to 1400m here. Zac Purton takes the reins which warrants respect and he bears close watching. #5 One Step Ahead if next best with the blinkers applied for the first time.

#2 Galaxy Racer is still winless. Though, he has been racing well and his latest narrow miss rates strongly for a contest like this, especially with Joao Moreira up. #1 Seize The Spirit has been consistent this term and is a course and distance winner. He can figure with the right run for Antoine Hamelin. #13 Kwaichung Brothers gets in light with only 115lb and has drawn very well as he seeks a third Hong Kong win. He’ll get the right run. #3 Who’s Horse is down to a competitive mark and hasn’t been too far away on occasions. He bears close watching.

#9 Nextmodel turned his form around last start to grab a close-up third. He steps out again here form a favourable draw and with the right run, shapes as the one they all have to beat. #6 Gold ‘N’ Bold snatched fifth on debut. He wasn’t too bad that day and he warrants plenty of respect with Zac Purton now taking over. #3 El Jefe got off the mark nicely two starts ago. He’s since struggled over further but should relish a return to 1000m here. #1 Fabulous Eight is looking for back-to-back wins. He remains in Class 4 which suits and does appear to have a number of ratings points still in hand.

#3 Racing Fighter has been consistent all term and appears to be finally nearing a win. Zac Purton sticks aboard which warrants respect and if he can overcome the wide he is going to be a factor in this. #12 Unique Treasure gets in light for championship leading trainer Ricky Yiu. Joao Moreira takes the reins for the first time which warrants respect especially as the galloper’s form has been only fair. #2 Quadruple Double is looking for back-to-back wins. Jerry Chau takes ten pounds off which suits and it wouldn’t be a shock seeing him deliver again.

#10 General Trump was unlucky not to have finished closer than he did last time but still, he’s racing in career-best form and if he’s continued to hold his condition then he’s going to prove hard to beat. #2 Bright Kid won well at his first start for Chris So last start. He can figure again with the right run and it wouldn’t be a surprise to see him win his way into Class 3. #13 Perfect Harmony has shown glimpses of ability. The Tony stable is on fire at present and it wouldn’t shock to this guy spring into form. #3 Happy Victory has turned his form around since stable transferring to Tony Millard. He bears close watching, as do all transfers to the Millard yard.

#6 So We Joy is racing well for a lightly raced galloper of six starts. He’s shown that it’s only a matter of time and now, at his second start over 1400m on the turf, he should be ready to perform at his best. #2 Party Genius has shown ability but is struggling to piece it all together. He has gone close on a number of occasions and in his favour is the booking of Zac Purton once again. #7 Momentum Happy won well last start. He remains in this class over a suitable distance and with even luck, he’s going to be fighting out the finish. #10 Winwin Thirtythree placed in four consecutive outings before struggling from the wide draw at his latest. He’s drawn awkwardly again but hopefully he’s learnt from last start.

#7 Natural Storm finished runner-up last time out, closing strongly over 1800m to finish second by a neck. He’ll relish the added furlong on offer and from the good gate, should get every opportunity. #1 Gala Night is a winner of three of his last five outings, including last start. He’s drawn to find the front here for Jerry Chau who takes off a welcome ten pounds, ensuring he gets in with only 123ln on his back. #9 Good Days is racing well and has experience on his side, as well as the services of Zac Purton and a favourable draw. #10 Victorious Seeker is consistent and his best warrants respect.

#13 Eligere has found a suitable contest. He’s put together a number of nice runs and now with only 115lb on his back, combined with breaking gate two he should have every opportunity to finally go on with it. #2 Handsome Bo Bo has the ability and gets the services of Joao Moreira here. He’s another who has drawn well and from there, maps to do nearly no work in the run. #1 Beauty Amigo is the likely leader of this. He gets a handy claim from apprentice Alfred Chan who should ensure he gets every opportunity to dictate up on the pace. #8 Tom’s Style is a steady improver. He might need a few more starts but he’s shown ability and warrants respect.

#4 Harmony Victory has been a model of consistency this campaign and is capable of rewarding himself here with a G3 success. This isn’t an overly strong contest and from the gate with Blake Shinn engaged, he just might find himself in the right spot. #2 Ka Ying Star is a model of consistency and should be setting the pace early. He’ll make his own luck out in front and his tough attitude should ensure he is in the finish. #7 Dances With Dragon is looking for the hat-trick of wins. He’s drawn well and although this is a sharp step up in grade, he does get in well at the weights and should be able to challenge these. #1 Southern Legend beat Beauty Generation at G1 level last time out. This is a weight-bearing task with 133lb assigned to his back but his class does hold him in good stead for this.

#5 Fantastic Show is after his fifth consecutive win. Figure he can do it following on from his recent performances and as long as he gets a clean run throughout, he can finish over the top of them once again. #4 War Room has shown glimpses of ability but is yet to piece it all together. He’s drawn a touch awkward but if he can put his best foot forward then he is a chance of going on with it. #2 Star Of Yuen Long has drawn to get the right run and he knows what this is all about as a course and distance winner. #6 Toycoon has ability and bears close watching.

#7 Lucky Express steps out on debut following two wins in Australia, including his latest at Caulfield in the AUD$950,000 VOBIS Sales race. He’s been prepared carefully and slowly by John Size for this debut and if he can match his trial form on race day, then he’s an excellent chance of getting off the mark on debut. #12 All In Mind slots in for Tony Cruz. He’s drawn to get the right run and remains a leading player if he’s held his recent form. #3 Lucky More is a winner of two out of his last three runs. He’s untrustworthy at times but his best is up to this and brings it, this race is well within his reach. #1 Stronger is aided by the 10 pound claim from Jerry Chau. He bears close watching. 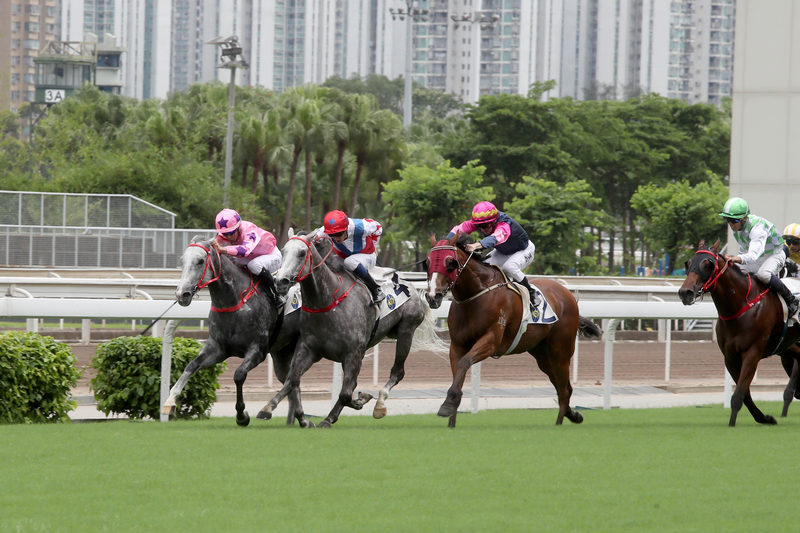