#11 Cour Valant was luckless last start at Happy Valley, checking off heels on a number of occasions before switching to the outside where he closed off nicely. He should appreciate the spacious Sha Tin straight which should give him every chance if he finds space. #8 Adonis found form last start finishing second. He might be ready to string a few nice runs together and if so, he’ll find himself in the finish. #6 Exponents has mixed it both on the turf and the dirt. He struggled out to 1400m last start but a return to 1200m should spark improvement. #5 Starlot got off the mark for his first win this season two starts ago. He won’t be too far away.

#8 Dor Dor gave every indication last start the step up to 2000m would suit. This isn’t an overly strong race and if handles the distance rise, he’s in with an excellent chance. #4 Ho Ho Feel has been threatening of late and he appears to have returned to a winning mark. Zac Purton takes the reins which should ensure he finishes thereabouts. #6 Sangria was G2 placed in France before arriving to Hong Kong. He’s struggled this season only placing twice but he appears to getting down to a competitive mark and he’s shown sharp improvement since returning to Class 4. #2 London Hall seeks the hat-trick of wins. He’ll need to lug 132lb this time but he deserves respect due to his consistency and will to win.

#8 Flying Thunder is one of three horses by Archipenko currently racing in Hong Kong, the other two being G1 winning siblings Time Warp and Glorious Forever. He’s shown an immense amount of talent his last four runs and his closing speed has given every indication that stepping up to 1400m would suit. He’ll be finishing fast with only 113lb on his back against a field of out of form runners. #6 Styling City finished third at his first attempt over 1400m last start. He’ll be much better for the run and with even luck he should find himself in the finish. #4 Time To Celebrate has stamped his claims as a top class miler. His latest trial effort was poor but his form prior has been strong and he has to be considered. #7 Dragon General closed impressively last start in the G3 Sha Tin Vase. He’ll appreciate the added furlong on offer.

#8 Supreme Plus is ready to take the next step. He was an impressive performer last start over 1200m, sticking on for a narrow second behind Shining Ace. This race appears suitable for him. #7 Phenomenal steps out on debut for Jimmy Ting. He impressed in a recent trial on the dirt and he’s capable of making his presence felt on debut. #11 My Winner has been ultra-consistent this season. He’s doing everything right and he remains a place chance yet again. #6 Ezra has been a conundrum since his debut in December last year. He’s shown glimpses of talent and he remains a big watch.

#5 Chicken Dance finished an impressive second on debut before he was found wanting on the good to yielding surface last start. He’s shown he has the raw talent to win so he deserves another chance, especially with Zac Purton electing to ride. #12 Lightning Treasure appears to have found his feet, registering a competitive runner-up effort at his latest. He commands respect. #6 Monkey Jewellery returns for his first run of 2019 after being found lame. He’s had a number of trials leading into this and if he can overcome the wide draw, he’s a place chance. #3 Sun Sun Fa Fa turned his form around last start to finish second at 79/1. He might be ready to go on with it in Class 4.

#6 Bellagio broke through for his first win two starts after joining the Ricky Yiu stable from the departed Michael Freedman. He found trouble upon straightening last start and from there he weakened to finish at the tail of the field. He’ll improve sharply dropping back to seven furlongs. #1 Flying Victory lived up to his trial form last start, lengthening clear to score in an impressive manner. He’ll have no issue shouldering top weight duties and he’s capable of winning his way into Class 3. #10 Nice Kick is better than his last start struggle would suggest. He’s a chance from the low draw. #4 City Legend has finished runner-up an astonishing seven times from 16 starts without winning. A fast pace will ensure he gets his chance from the back.

#1 Voyage Warrior’s colours were lowered last start by Thanks Forever who appears destined for bigger and better things. Prior to his defeat he notched up two impressive wins and although he went under last start, it took a seriously talented horse to do so. He’s still racing in very good form and he has the class edge to get the job done. #11 Hair Trigger has slowly been getting back into form. He kept on for third in a hot form race last start and if he can handle the drop in distance to five furlongs, then it’s possible he gets close to Voyage Warrior. #14 Look Eras gets down in the weights. He’ll find the front and make his own luck. #2 Hong Kong Bet has found form his last two outings. He’s a place chance.

#1 Rise High comes off a strong runner-up effort behind Exultant in the G1 Standard Chartered Champions & Chater Cup. He’s a four-time winner over the mile who has continued to hold his form across the season in a number of very strong races. He’s ready to land a big race win and he gets an excellent chance to do so, as a number of these runners are simply struggling for form. #7 Insayshable closed impressively for third last start for third at G3 level behind Champion’s Way. He receives a welcome rise in distance and his recent form suggests that he will be competitive. #6 Dinozzo returns a competitive grade. He’s been outclassed his last three starts but he appears to have found a race well within his grasp here. #4 Seasons Bloom is a G1 winner. He’s struggled of late but he appears to be returning to form.

#2 Uncle Steve was an excellent winner last start. He found his best stepping up to 1600m and he’s every chance of going back-to-back on Sunday. #11 Chairman Lo recorded his fifth second place finish last start, going down by a short-head to Marqula who won at 62/1. It’s only a matter of time before he finally breaks through, although he has become a costly conveyance for his supporters. #10 Beauty Day has placed in his last three. Alfred Chan takes 10lb off  and he’s likely to lead with next to no weight on his back. #1 Packing Warrior is next best.

#7 Silver Fig was luckless last start. Prior to last start he was an excellent winner with Neil Callan in the saddle, who regains the ride for Sunday. He’s drawn well and with a clean run he can atone for last start. #9 Charizard has been a model of consistency all season. He’s not the most straightforward of rides but if he gets a fast pace, he’ll get his chance to finish off strongly. #13 Little Wise Man notched up three consecutive runner-up efforts before finally breaking through at his latest. He wasn’t as decisive as expected when winning and rising to Class 3 could see him struggle. #1 People’s Knight has returned to a winning mark. Although his form has been better on the dirt lately, he’s still capable of mixing it on the turf. 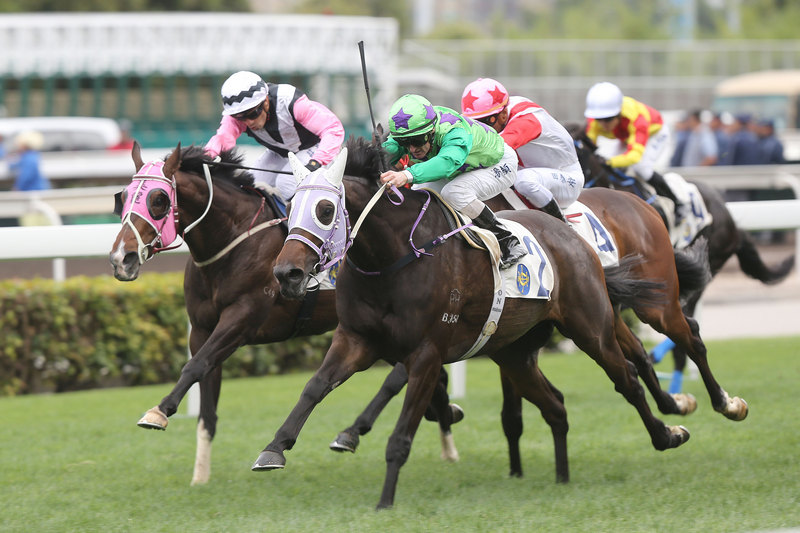