#3 Winning Method couldn’t have been more impressive last start winning by over three lengths. He’s had two runs over this course and distance, including a second on debut behind Aethero who has since come out and won again. He’s clearly the one to beat. #4 G Unit was well beaten on debut by four lengths. He should find this easier and with natural improvement he’s capable of finishing inside the placings. #7 U W Brother was beaten for speed on debut. He’s entitled to bounce back against easier opposition. #2 Target Finder is next best.

#3 Friends Of Nanjing has struggled of late but he might be getting down to a competitive mark. He hasn’t won since recording three consecutive scores in 2016 with his first trainer. He’s now with his third trainer and although his recent form has been poor this isn’t an overly strong Class 5 and his recent track work indicates that he might be working his way back into form. He’s worth a play at a big price. #2 Indigenous Star got his first win this season two starts ago. He sat off the pace last start and found himself far too back in the field with too much work to do, however from gate 9 under Purton he should be able to give himself every chance up on the speed. #5 Good Runners Way closed for an improved fifth last start. He’s capable of progressing further and this race is suitable. #6 Whisky Knight is racing well and he should be kept safe.

#7 Super Kin is on debut for Fownes/Purton. He’s impressed in a number of trials at Conghua and he appears capable of making his presence felt on debut. Strong booking of Zac Purton suggests this galloper has shown plenty of early talent. #4 Aquila was sent out as favourite on debut and could only manage second behind a fast-finishing Valiant Dream. He’ll have taken plenty of race day experience from that performance. #1 Marvelous World finished third behind Aquila two starts ago before coming out to score at his latest. He gets 10lb off his back thanks to Chan’s claim and he’s a pretty straightforward horse for the young apprentice to guide down the straight. #3 Eptiwins is expected to improve dropping back to 1000m.

#2 Sunny Power lines up for the lethal Ho/Lui combination. He’s narrowly missed in each of his last three and in his latest by a length behind Touch Of Luck who received none of his namesake on Wednesday night. He’ll be finishing fast and if they run along at a hot pace here, he’ll get his chance. #8 Smart Rocket is a two-time winner already this season. He pushed forward to sit on the speed last start, taking away from his finishing burst which resulted in a one-paced third. #10 Little General has mixed his form but he might have figured out what life in Hong Kong is all about and he’s a major player with Zac Purton aboard. #9 Such A Happiness can get into the placings.

#2 Magic Success was a dominant winner last start, breaking through for his first win this season at just his second start since relocating to the John Moore stable. He was dominant and as a result received 12 ratings points for his win. He remains in Class 4 which suits and he should prove tough to beat again. #7 My Winner has been consistent without winning. He should find himself in the right spot under Karis Teetan from the good gate. #1 Beauty Applause was one of many who finished behind Magic Success last start. Suspect the same front running tactics are employed and he’s capable of clinging on for some prize money. #9 Royal Chocolate is as honest as the day is long. Apprentice claim from Chan takes him down to 109lb which gives him a lightweight chance of finishing inside the top three.

#2 Young Legend put it all together last start for his second win this season and with Zac Purton retaining the ride he should get every chance to win his way into Class 2. #3 Follow Me is far superior to what his last two unplaced performances suggest. He returned from a three month hiatus last start and his lack of race fitness showed over the closing stages as he faded to a distant eighth. He can bounce back to form with that run under his belt. #10 Triumphant Horse has been a steady improver since arriving in Hong Kong from Australia. He’s slowly acclimatised and he can take another step forward here. #8 Best Alliance is ready to step up to 1400m. He’s worth keeping safe.

#10 Victory In Hand is on the up and it could be third time lucky for Francis Lui’s galloper on Sunday. He finished an eye-catching third last start over 1200m and he finished off in the manner that would suggest the step up to 1400m was a positive. #2 Gift Of Lifeline makes his Sha Tin turf debut. He’s shown plenty of early talent for trainer Tony Millard, including an impressive win earlier in the season prior to his two most recent third place efforts. Suspect the blinkers go on to sharpen him up and with even luck he should be challenging for the win. #8 Intrepic has hit a purple patch of form with Moreira aboard at his last two outings. He led and won well two starts ago before flashing from near last to finish third at his most recent. He’s shown that he isn’t just a one trick pony and if he finds himself in the right spot, he’s another who will be challenging for top spot. #1 Beauty Loyal is winless. He’s shown his last two outings that it’s only a matter of time before he gets the job done. Purton on again signals intent from the Cruz stable.

#7 Highland Fortune was a distant second behind the talented Big Party last start. He brings the right form line to be winning here and if he’s continued to progress in the right direction, he’s the one to beat. #2 Lockheed comes into this following two narrow runner-up defeats. He’s racing well and it could be third time lucky for Danny Shum’s gelding. #8 Aerohappiness was the one to run down Lockheed last start. He’s found his groove and if presented at the right time he’s capable of finishing over the top of them. #1 Hello Beauty is ready for 1200m. He’s the wildcard going around the bend for the first time.

#4 Red Desert finally lived up to his trial form last start when breaking through at only his fourth appearance. He appears to have finally put it all together and with even luck he’ll be able to score again. #1 Sunny Boy has been plagued by injury since arriving in Hong Kong from Australia where he placed at Listed level. He’s drawn a touch awkward which is a concern but if he can overcome that, he’s in with a chance. #3 War Room has shown glimpses of talent since arriving to Hong Kong from Australia where he went three from three pre-import. He gets the blinkers first time to sharpen him up and he might just be ready to piece it all together. #8 Invincible Missile has done everything right of late except win. He has claims, especially with Zac Purton sticking.

#8 Champion Supreme finished third in his bid for a hat-trick of wins last start. He’s a course and distance winner who from the good draw, is capable of returning to the winners’ stall. Purton hops on after guiding Splendour And Gold to victory last start. That horse #4 Splendour And Gold gets an excellent chance to win again. He’s won three from five and if he can overcome the wide draw, he’ll be in the finish. #10 Super Elegance closed for an eye-catching fifth last start. He was a touch luckless in the straight and had he received clear running room he arguably would have finished much closer. He’ll relish the rise in distance to 1800m. #3 Marzouq won’t be far away.

#3 Hezthewonforus returned this an excellent first up winner last start, fending off challenges from Fast Most Furious and Styling City. He steps up to 1600m off that performance which poses no threat and he’s expected to take up the running early to try and lead. #5 Enrichment was well beaten at Class 1 level following a midfield finish in the Hong Kong Derby prior. Return to Class 2 suits and he’s expected to improve sharply. #10 Gold Chest has found a suitable race. A fast pace should ensure that he gets every chance to close strongly. #2 Harmony Victory is racing well and he’s a contender with the right run. 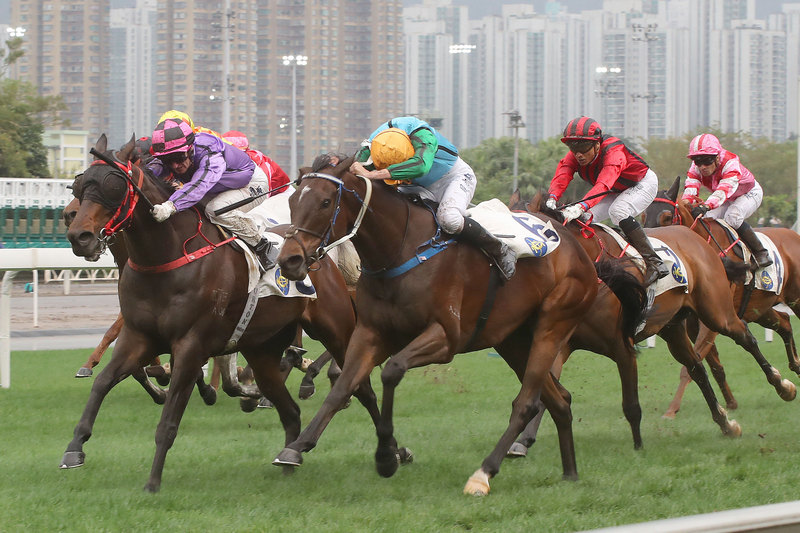