Preview and form for the meeting at Sha Tin on Saturday. Selections by Andrew Hawkins.

#1 Dashing Gainer was racing into form at the end of last season, finishing a strong second at his last run in May. If he can find the front here, he will be tough to run down. His former stablemate #6 Flying Godspell steps out for freshman trainer Jimmy Ting. He’s another that can press forward but, even if he camps off the leader, he should be in the firing line at some point. It is a miracle that #4 Great Joy didn’t win last season. He will likely find this too sharp, but don’t be surprised to see him thundering home from nowhere fresh. #5 Just Not Listening has a wide draw but should be somewhere in the mix with even luck.

#5 Rookie Star, a son of 2007 Kentucky Derby runner-up Hard Spun, makes his dirt debut here. He was finding form towards the end of last season and, with a run under his belt, perhaps he can finally break through here. #8 Snowhooves has been racing well. He has to jump from an awkward gate, but with Zac Purton in the saddle, he’s sure to be in the mix. #12 Corre Rapido will score a win on this surface at some point, it’s just a matter of when. #3 Happy Sound won well fresh from a Conghua stint and he’s proven on this surface too.

#5 Friends Of Nanjing has had plenty of issues that have prevented him from reaching his full potential in Hong Kong. Still, first-up with no weight on his back, he could easily find the winners’ circle again. #6 Khaki dislodged the rider at the start when making his debut for Tony Millard in July. Millard has a good record with horses first-up for his yard, and given this is essentially the five-year-old’s first start for the stable, don’t be surprised if he runs a big race fresh. #1 Burst Away ran two good races at the end of last season. That form should see him somewhere in contention here. #3 Looking Good can figure as well.

#2 General Dino is still yet to emulate his sire Doctor Dino as a Sha Tin winner, but it’s appeared just a matter of time after performing strongly in two of his three starts in Class 4. This trip may be slightly short, but if the breaks fall his way, he can score in this spot. #3 Enjoy Life may have reached his ceiling now, but he’s been racing so well that it’s tough to leave him out completely. #9 Enjoyable Success has not been the most tractable galloper in his races, showing some of the traits once attributed to his sire Frankel. He gets blinkers on here, which could backfire, but it could also spark him to life. He’s worth watching. #11 Le Panache went to another level last start and has looked a different horse at his last three starts. If he can replicate those efforts, he’s a big contender with no weight – but it remains a big if.

#3 Pakistan Friend won very nicely on debut over this course and distance in July and ran a very solid race fresh. He still produced the fastest last 400m last time out and it won’t take much for him to break through into Class 3 here. #5 Have Fun Together was racing well without winning last season. He steps out first-up with Zac Purton back aboard again and he should get every chance from the inside gate. #9 Bellagio should relish a step up in trip to 1400m and he’s not without a hope. #7 Impeccable Fellow is another who should be improved in his second season, having been scratched at the gates at the Season Opening.

#7 Harbour Alert has only won once in 32 starts, but he has finished second 10 times, including three times over this course and distance. He has trialled very well and, although he can be a tease of a horse at times, this looks a perfect spot for him to figure. #3 Turf Sprint makes his dirt debut here at his 44th career start and his 34th local outing. There are dirt influences in his pedigree and he has trialled well on the surface, so it wouldn’t shock to see him around the mark. #11 Phantom Falcon hasn’t put on any weight over the off-season – if anything, he’s lost weight. Still, his two runs over this course and distance he had excuses, as he did in a number of efforts last term, and he’s deserving of attention with no weight to carry. #5 Super Man is always a place chance over this course and distance.

#6 Friends Of Ka Ying is one of the most frustrating horses in training, particularly at his current mark. He’s so close to getting a win, his first since beating multiple G1 winner Helene Paragon in January, 2016, but he’s just found one better than him at his last four starts. Maybe Victor Wong’s 10-pound claim can prove all the difference. (Random fact, too: as racing fan Joshua Kayll noted on Twitter after the seven-year-old’s last-start runner-up finish at Happy Valley, he is the only horse still in training who has contested a Winx-less Cox Plate, having finished second-last behind Adelaide in 2014.) #4 Helene Charisma ran home well first-up at Happy Valley. The French G1 winner seems to have appreciated his summer at Conghua and he can run home solidly again. #8 Sangria was racing consistently before a last-start failure. He can’t be overlooked. #5 General Sherman ran home powerfully fresh and he’s a hope if he can back that up.

#2 Jing Jing Win has had myriad issues in his time in Hong Kong. However, he’s more than capable of winning off his current mark if things go his way. Perhaps the Sha Tin straight can help him to produce his best in this grade. #10 Little Bird won as an odds-on favourite should two back before sticking on OK behind Cruising last time out. He should be better for the first Class 3 outing and he’s not without claims in this. #11 Nice Fandango should press forward and he will be in front for a long way. #12 Triumphant Jewel has spent most of his Hong Kong career in this grade. He might find it a little tough these days but he’s still a place chance.

#4 Comfort Life won readily two starts ago and his trial in preparation for this suggests he’s capable of taking his rating into Class 2 territory. He bears close watching. #6 Sun Touch ran well fresh over 1200m when not having the clearest trip. He’s better over 1400m and should be somewhere in the mix. #7 Penang Hall is down to a mark where he should be able to get into the finish with even luck. The draw does make it tough, though. #1 Sebfire ran a terrific race on debut in Hong Kong and looks a Class 2 galloper, at the very least. He’s another with a bad gate but it’s not going to take him much to figure.

#3 Super Turbo ran fairly at his only attempt at the Sha Tin 1400m but he has always looked a horse that would relish this trip. If he can get a solid tempo to chase, then he is capable of sailing over the top of them here. #2 Citron Spirit ran well fresh over this course and distance. He may want a mile now, but the 10-pound claim of Victor Wong sees him get in with an attractive weight. #5 Fast Most Furious disappointed at his last two runs, but he had been racing well before that. If he can find that Class 3 form in this, he’s not without a hope. Proven types like Joyful Trinity and Morethanlucky are not out of this, but it might instead be worth including Hong Kong debutant #14 Mr So And So in all exotics. He has trialled well on a number of occasions and he steps out having spent the summer at Conghua.

Click on the HKJC form guide banner for Racingandsports.com.au form and select race. 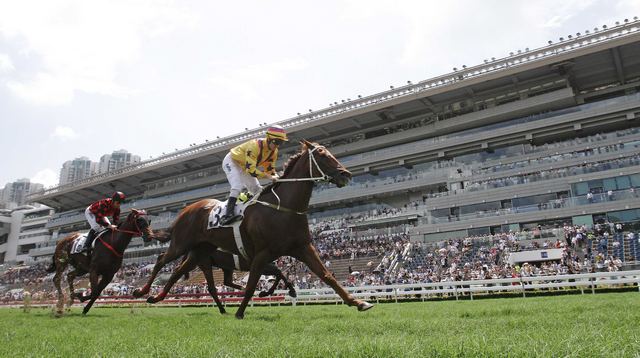