A six-race Saturday of 'Racing at Meydan' featured four races contested by horses with Dubai World Cup Carnival ambitions and was a meeting filled with dominant performances by those looking to imminently land a place in the international showcase.

Arguably the most impressive of the victors was Touch Gold Racing’s Satish Seemar-trained Pop the Hood, who sailed home a swift winner of the 1200m Lincoln Navigator handicap for horses rated 75-89, finishing up in a time of 1:10.90 under Tadhg O’Shea.

Initially stalking leader Important Mission after overcoming an outside post, the pair pounced on the leader and pulled clear with authority from 300m out. The final margin was 4¼ lengths, with Important Mission holding second by another five lengths to Etisalat, whose reception from Sandro Paiva earned him a placing. It was lucky number seven—his seventh try in the UAE—for the winner to land a victory after being imported from the USA. An 8-year-old gelded son of Street Cry, this was his sixth career victory from 26 starts. His final 400m was in an eye-catching 23.46 seconds and he was awarded with a seven-pound increase to a rating of 93.

“This horse has always worked very well, but has not always produced it on the track, but did today and has won well and in a good time,” said Mike Kaye, principal of Touch Gold. “We were not actually worried about the wide draw and hopefully that gets him into the Dubai World Cup Carnival, which is obviously what we wanted to achieve.” 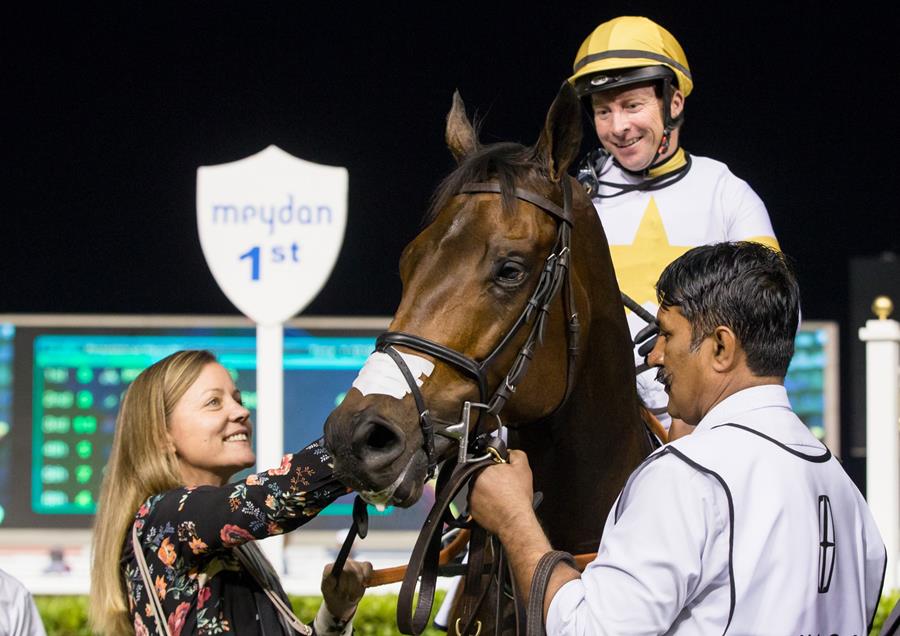 Seemar let loose a squall earlier in the evening when Al Bayraq Stable’s debuting 3-year-old Emblem Storm (pictured below) rained havoc down on his competition in the Lincoln Continental sophomore maiden, slicing between horses turning for home after taking ample kickback, briefly tussling with favoured stablemate Lake Causeway and then washing him away en route to a two-length victory. His final 400m was in a sharp 25 seconds flat and the 1600m time in 1:39.09 under Antonio Fresu. An English Channel colt, he is out of a half-sister to multiple G1-winning mare Lush Lashes and cost his connections $96,000 at OBS April.

“We broke well, but then he did not like the kickback,” Fresu said. “I was able to find a bit of space, even in that big field, which did his confidence a lot of good and then he travelled nicely before quickening and showing a very good battling attitude. He should improve from this debut and it was obviously a nice spare ride for a top yard.”

One-sided performances were in style on Saturday, especially in the Lincoln Corsair, a 2000m dirt handicap that looked particularly competitive on paper, but was manhandled from start to finish by jockey Sam Hitchcott and Doug Watson-trained Illusional. Owned by Dale Brennan, who also owns impressive December handicap winner Golden Goal, the son of Bernardini and full-brother to 1000 Guineas (G1) winner Gamilati won by five facile lengths in a sharp time of 2:05.32. His effort earned him eight pounds to be rated 89, while winning for the third time in his career from 16 starts and racing for the first time since March 2.

Market favourites were not to be shut out, as Godolphin’s Beauvais landed the 2140m turf handicap, the Al Tayer Motors, battling well under Kevin Stott for Saeed bin Suroor to win by a neck. The son of New Approach hit the front about 400m from home and always looking likely to hold the late challenge of Dolmen, a third runner-up after the first four races for Richie Mullen. Bin Suroor’s charge was winning for the second time on just his fourth career start, having won his debut, over 2200m, at Ripon as a 3-year-old in May 2018. He has not yet finished out of the money from four starts and earned four pounds to be rated 86 and would require another four to qualify for the DWC Carnival.

“We thought he would run well, but did not have a great draw and can be a bit tricky,” Stott said. “Obviously, he has not had much racing, but his form in Britain was good and he has done well to win here, showing a determined attitude. It would be nice to think we can qualify him for a Carnival race.”

Another competitive handicap with DWC Carnival implications was the nightcap, the Lincoln Aviator handicap over 1400m on turf. Defying a 702-day layoff, Tashweeq and jockey Szczepan Mazur weaved the Musabbeh Al Mheiri-trained 7-year-old through traffic with confidence, struck the front in the final furlong and galloped to a widening 2¾-length victory. Touch Gold Racing’s Speedy Move was a trying second, while Racing in Dubai Sale topper Kinver Edge finished third after setting the pace. The winner earned seven pounds to be rated 95, which is still well below his 105 from his last race in Feb. 2018.

“He travelled well, but got into trouble,” Mazur said. “When the position was open, he was just flying and ran a great race. I didn’t expect him to do any good after 700 days (off the track). I just wanted to get him around safely.”

The opener, the Lincoln Nautilus, was a 2000m dirt maiden for 4-year-olds only and won relatively easily by Harbour Dance, who would have scored even more comfortably had he not drifted alarmingly towards the centre of the track when well clear. Ridden by Tadhg O’Shea for Al Mheiri and Al Rashid Stables, the gelded son of Harbour Watch was soon at the head of affairs and never looked in danger, despite his errant passage home. O’Shea was quick to straighten him and then found he had a willing partner who finished his race off strongly. Harbour Dance earned 12 pounds to be rated 82.