A rails hugging ride by Damien Oliver aboard Godolphin raced Plaquette has continued the mare's good form at Caulfield in Melbourne on Saturday.

Plaquette has now registered two wins and a second from four runs at the track after taking out the $125,000, MRC Member Garry Franklin Handicap (1100m).

Oliver elected to ride Plaquette quietly from her outside draw before hunting up on the fence in the straight. It proved the difference between winning and losing as Plaquette ($8) registered a half-head win from La Mexicana ($3.90), with the $2.10 favourite Miss Albania a further three-quarters-of-a-length away third.

While winners earlier in the program had been away from the fence, Oliver said the track condition played little part in the result.

But Oliver was mindful of Plaquette’s pre-race behaviour, especially in the gates.

“It was a small field and the tempo was only moderate, and I don’t think the track played too much part in the race,” Oliver said.

“But she’s quite the madam in the gates. She’s not really nasty, she just rears up and she’s good at it.

“She knows what she’s doing and hopefully you catch her at the right time … when she’s got all four [feet] on the ground when she jumps and not two.”

Godolphin representative Sean Keogh said Oliver and Plaquette had struck up a good association since her arrival in Melbourne, four starts ago, with Saturday’s win the pair’s second.

Keogh said going into the gates late was certainly a positive.

“She can tend to be a bit cantankerous in the barriers and going in late suited,” Keogh said.

“She’s probably on the back-end of her career as is, but we see her in a fine vein of form and that’ll be something for the team to think about going forward.” 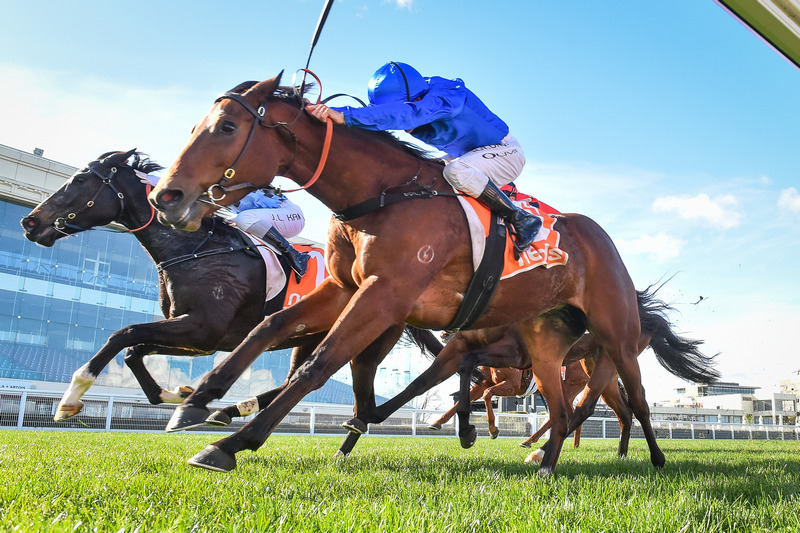 The stretch for the line worked for Plaquette and Damien Oliver, picture Racing Photos