Pippie has kept her impeccable first-up record intact with a blistering performance in the $1 million Group 1 Moir Stakes (1000m) at The Valley on Friday night.

The John and Chris Meagher-trained mare is now unbeaten in four first-up performances and claimed a second Group 1 sprint with her all-the-way win.

As she did in winning the Group 1 Oakleigh Plate (1100m) at Caulfield in the autumn, Pippie was the first to begin and simply outsped her rivals to claim the main event at the return of night racing at The Valley.

Under the guidance of Damian Lane, Pippie ($6.50) scored by three-quarters-of-a-length from Trekking ($8) with Bella Vella ($7) in third place.

Chris Meagher said Pippie gets around the stable at home like a 10 year-old gelding, but as soon as she bounces from the gates, it’s race on.

“I’ve said it before, maybe a touch arrogant but, I don’t care what I run her in, I know that she is going to run enormous,” Meagher said.

“I’ve said all week, if someone wants to lead us they are going to have to break ten (seconds).

“We know how fast she is and we know that she can sustain that, so I was rapt how everything worked out.

“Damien rode her there twice and was rapt with her, so we came here as confident as you can be going into a Group 1, and to pull it off, was just amazing.” 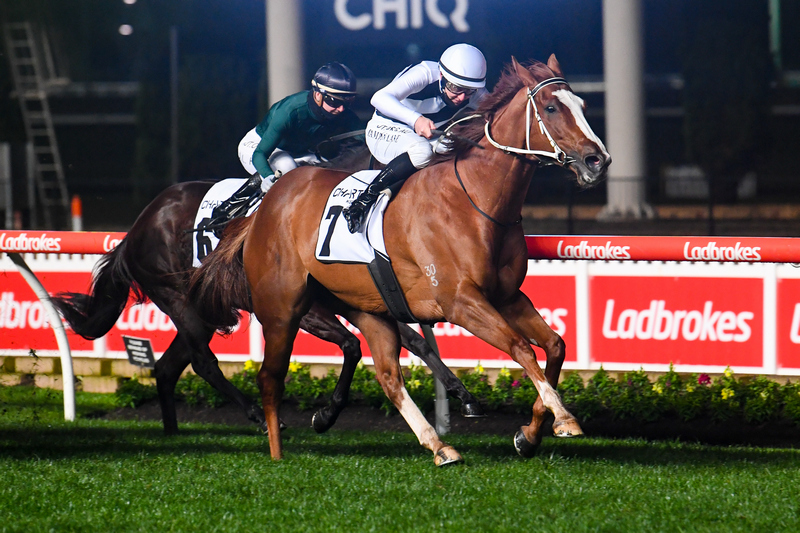 Meagher said he would see how the mare recovers from Friday night’s contest before deciding on where the mare will next head.

Pippie shortened from $26 to $11 with TAB for the Manikato Stakes after her victory.

Lane said he has not ridden a faster horse from the barriers.

“You just give her some reign out the barriers and just lay on her neck and she does the rest for you.,” Lane said.

“She is so fast early, obviously runs those quick sectionals and gets everything else chasing.

“I actually thought I was in a bit of trouble at the corner when she came off the bridle, but I asked her for her max effort and she really dug in again.”

Pippie is a five-year-old mare by Written Tycoon from the Ne Coupez Pas (USA) mare Coupe Express and has won six of her 12 starts for Heran Racing Pty Ltd, collecting $1,201,950 in prize money.

Despite being beaten, John Allen, rider of the runner-up, said Trekking had ran a huge race first-up.

“He had a beautiful run through and I thought at the top of the straight I was maybe going to get them, but there were no excuses,” Allen said.

“The winner was too good.”