Fresh off a Group 1 win and a holiday back home in Brazil, jockey Bernardo Pinheiro hopes to make his fourth one-day visit to Singapore a winless stint no more.

The young Brazilian rider, who just rode his third Group 1 winner aboard the Majed Al Jahouri-trained Harrab in the Emirates Championship (2200m) in Abu Dhabi on March 21, was invited by owner Mr Phua Chian Kin of the Oscar Racing Stable to ride the Steven Burridge-trained Mr Malek in the $1 million Group 1 Kranji Mile (1600m) on Saturday.

Pinheiro is no stranger to the Kranji racecourse, having flown here three times before to ride Mr Clint, then owned by Phua and trained by ex-Kranji trainer Lee Freedman, in three Group 1 races, namely the Singapore Derby (second), the Raffles Cup (second) and the Queen Elizabeth II Cup (12th) in 2019.

He enjoyed a short break in Brazil with his wife Gabriela after his latest stint in Dubai ended in early April. The couple arrived in Singapore six days ahead of Kranji’s first feature race of the year. 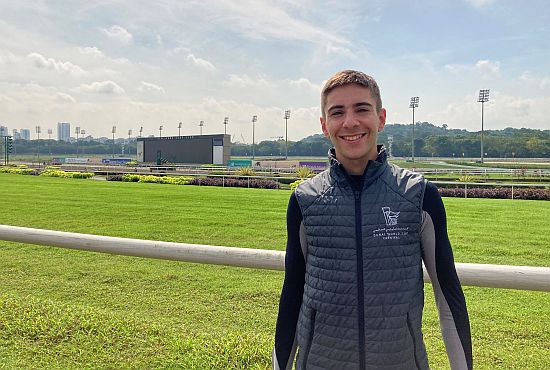 Jockey Bernardo Pinheiro will ride at Kranji in the Group 1 Kranji Mile after being away for more than two years, picture Singapore Turf Club

“I reached here on Sunday night, slept for two to three hours and galloped Mr Malek at trackwork on Monday morning,” said the well-spoken Pinheiro, who has 519 wins to his name in close to nine years of riding.

“When I went back to Brazil, an owner who’s my good friend, invited me to ride at the Jockey Club de Pelotas.

“I did not win on his horse but I won on the main race (84° Grande Prêmio Princesa Do Sul on Divino Corunilha) of the day.

“We flew back to Dubai and after three or four days, we flew to Singapore.

“I liked his (Mr Malek) action on the Polytrack. This morning, I cantered him again on the uphill track. He felt fresh for me.

“It’s the first time I’m riding trackwork in Singapore and in my (13) rides here last time, I never rode on the Polytrack so I really loved it. The racecourse in Singapore is really beautiful.

“I also watched all the replays of the races last Saturday and Mr Malek’s past runs.

“When I study, I like to see all their best races and the last two starts because it can tell a lot about the horse.

“It’s even better that I get to ride him in trackwork because I did not get the chance to do that for Mr Clint last time.

“From the replays, I think he’s a horse that can run with any sort of pace in a race. If it’s slow, he can be more forward, if it’s fast, he can come from behind and finish off well.

“He’s not a difficult horse to ride as well, so I am hoping for a good pace to help me in the Kranji Mile.

“This is a very strong race, but I believe a horse has a chance when he is in the race. He may not be the favourite, but I always try to be very confident in all my rides and give my best.

“I have got a few seconds here, so I hope to get my first winner here.”

His fruitful association with Phua began when he scored aboard Affleck, Mr Crowe and Mr Hanks, all trained by former assistant-trainer to the late Laurie Laxon, Shane Ellis, during his short three-month stint in Malaysia from July to September 2019.

Besides his first three partnerships with Mr Clint, Pinheiro revealed he almost came for Mr Clint’s fourth consecutive run in a Group 1 race, which was the 2019 Dester Singapore Gold Cup (2000m) in November which he won eventually under Melbourne Cup-winning jockey, Craig Williams.

“Mr Clint ran second for me twice (in Singapore Derby and Raffles Cup), so CK (Chian Kin) invited me to ride him in the Queen Elizabeth II Cup the third time,” said Pinheiro who rode a total of 33 winners from 128 rides in Malaysia, including the Group 1 Selangor Gold Cup (1600m) on the Shane Edwards-trained Truson in 2019.

“When I was on the flight from Dubai to Singapore, the horse was supposed to be scratched because he was lame, but I didn’t know. But in the end, CK told me they fixed him, so he will run.

“When he ran in the Gold Cup next, I was in the midst of the racing season in Dubai. They thought he would get a light weight like 51kgs or so, so I told CK I can waste and make the weight to make the trip.

“But Freedman was concerned of the long flight (from Dubai) and with the wasting that I might be tired.

“So, they discussed and opted for Craig Williams who just won the Melbourne Cup that year. I saw the horse win and was of course sad about that, but I’ve moved on.”

The seven-year-old son of Power has since changed connections and is now trained and owned by local trainer David Kok.

Besides Mr Malek, Pinheiro, 25, will also ride Ironprince for Burridge in the $30,000 Minister 2021 Stakes, a Class 5 race over 1400m, as well as Pennywise for trainer Ricardo Le Grange and Sky Eye for Jason Lim.

Burridge, who is currently one shy of 800 wins in Singapore, is aware of the highly competitive field, but he reckons a softer ground could help Mr Malek, a five-year-old son of Swiss Ace.

“He wore the visors then as I was tinkering around with the gears, and he has the tendency to lay in, but he would wear the blinkers again this time.

“He’s not well-weighted here (all runners on 57kgs). Anything between barrier 1 to 6 would have been good, but he’s being handed 10. We will work it out from here.

“It had been raining the past few days and he does prefer the softer ground.

Pinheiro and his wife will catch the red-eye flight back to Dubai at 1am, straight after the 12-card race meeting this Saturday. He has applied to ride in Saudi Arabia in July before resuming riding in Dubai as stable jockey for two trainers at their new season in October.