In-form trainer James Peters is looking forward to being represented by two ‘live chances’ in Grand Koonta and Skywalk in the $400,000 Group 1 Lion City Cup (1200m) this Sunday.

The Englishman is not unfamiliar to the high pressure that comes with the territory in Group events, having spent six years at the backend of former leading Kranji trainer Michael Freedman’s yard, getting the likes of Super Easy, Better Be The One, Super Ninetyseven or Mr Big shipshape for such big events.

Since taking over the baton from the Australian handler in 2016, the London-born Peters has not had as many top guns running at the elite level, but he has still logged in one Group 2 win with Titanium in the Stewards’ Cup at his very first year of training. 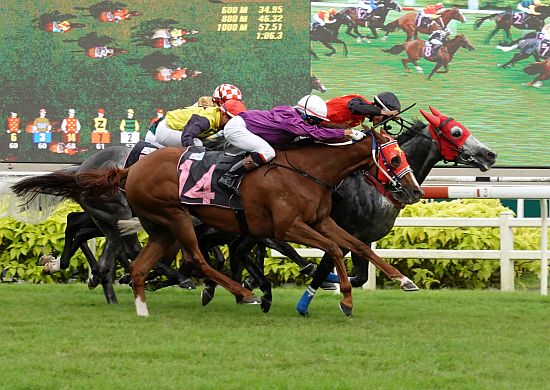 He has fielded the odd Group 1 runner over the years, mostly outsiders, but four years on, Freedman’s former senior track rider, turned assistant-trainer and now a full-fledged trainer may well be hitting the big time in his own right.

There are 14 opponents to beat, including a certain Inferno, the new sensation at Kranji and recent dominant winner of the Group 1 Singapore Guineas (1600m) one month ago, but Peters still sounded upbeat about his chances.

“Both horses are well. They trialled last week (in same barrier trial) and have come through that fine,” said Peters who is enjoying his best season thus far, currently sitting in seventh spot on 19 winners.

“I would say Grand Koonta has improved since his first-up win (Class 1 race over 1200m on September 26). He was then up in body weight, he had only some soft trials, and has tightened up since.

“I thought Skywalk also ran very well in that race Grand Koonta won. He was beaten only around three lengths behind and he was carrying the top weight.

“He’ll be back at level weights this time. Sure, he’s probably better on Polytrack, but he’s the top-rated horse in the field.”

Peters has booked two first-time partners for his duo, who are both raced by his staunch supporter, the China Horse Club: French jockey Louis-Philippe Beuzelin on Grand Koonta (five-year-old by Dark Angel) and South African jockey Ryan Munger on Skywalk (seven-year-old by Battle Paint), who will carry the first set of colours.

“I actually spoke to Louis quite a while back. After Alysha Collett left, I needed a jockey to ride Grand Koonta, and Louis said he would be available,” he said.

“He couldn’t ride him at his comeback race as he couldn’t ride at that weight (52.5kgs). Harry (A’Isisuhairi Kasim) got on and did a good job to win on him.

“Ryan will also ride Skywalk for the first time. He rode him in the trial last week, and let’s hope they go well.”

To Peters, if they bring their A game, they should be in with a shout at the business end, regardless of the daunting presence of the Cliff Brown-trained Inferno, who will be at his first test against the best sprinters of the land, one month after running in a mile race.

Incidentally, Peters is the trainer of the only horse to have lowered the boom of Inferno: Siam Warrior, but he doesn’t see himself as holding the block of kryptonite that can stop the Barree Stable-owned superstar.

“Inferno was still coming along then, and he was probably not as good as he is now. He also didn’t have the best of runs that day, we were lucky,” said Peters.

“He has been very impressive in what he’s done so far, you can’t knock him, but he’s jumping back from the mile and he will be running against more seasoned sprinters.

“The 1200m might just make it a little harder for him. We’ll see, but he’s still a very good horse.

“To me, it’s just so exciting to have two ‘live’ chances in a Group 1 race. We don’t get that very often.”