A son of All Too Hard from the former Group 1 winning racemare Snitzerland, Hard Landing lined-up for his third race start in the 1000-metre assignment and didn't put a foot wrong — jumping straight on to the pace before seizing control of the contest at the top the short Moonee Valley straight and subsequently winning by a clear-cut margin.

Diesel 'n' Dust (by Pride of Dubai) closed late in the straight to get alongside the flanks of the winner for an eye-catching second, with The Cruiser (by Charge Forward) turning in a highly promising debut performance to land third.

Hard Landing's ability was well-known to punters before the race and the powerfully-built member of the Lindsay Park Racing stable wasn't short of supporters. The 2019 VRC Melbourne Cup carnival witnessed the son of All Too Hard record a Group 3 debut success in the time-honoured Maribyrnong Plate (1000m), a victory which established him as a leading member of last season's Victorian juvenile ranks.

However, things went 'pear-shaped' at the beginning of this year during his only other campaign as a 2-year-old. His second start took place in the Group 3 Blue Diamond Prelude in which he finish a well-beaten 10th of 12 starters, though a very good reason for his failure surfaced in today's post-race interviews. 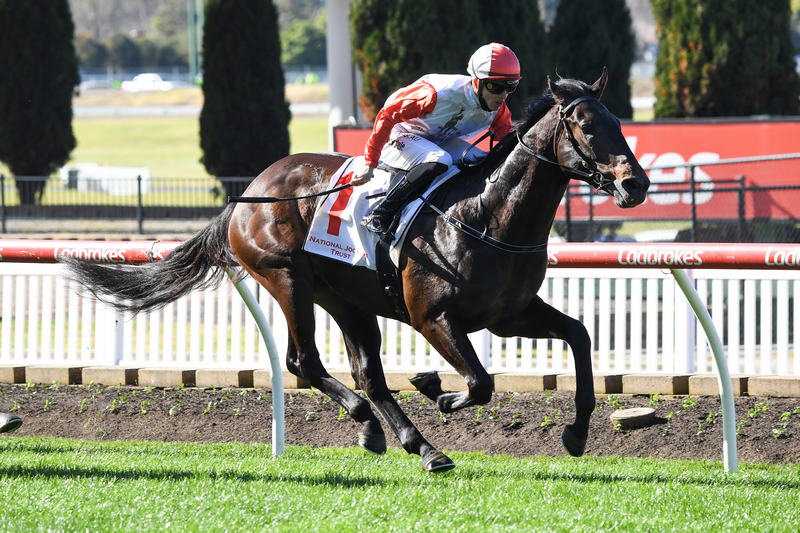 Trained in partnership by Tom Dabernig & Ben Hayes, Hayes explained that all was almost certainly not right with the beautifully-bred youngster when he last faced the starter.

“It was fantastic to see him back,” claimed a relieved Hayes after the first-up win.

“He’s a lightly-raced two-year-old because he got really sick after his last run. He had to have a big dose of antibiotics and we really looked after him.

“But he’s come back fantastic. He’s matured into himself. Grown up over the hind [quarters]. Fantastic to see him win like that. A big thrill.”

Hayes added: “Today was a bit of a test. There’s a race [Listed McKenzie Stakes] on 22 August here at The Valley. He looked like he handled The Valley pretty well today, so that will be his next progression.

Hayes concluded: “I’d just like to say thank you to the owners. He’s got a great group of owners in him and they’re great supporters of the stable.”

Hard Landing was partnered to victory by Thomas Stockdale, who virtually had the proverbial armchair ride on the colt.

Discussing the race afterwards, Stockdale observed: “The leader set up a good speed to sit off. The horse relaxed throughout and gave me a good kick on the turn. He’s still got a little bit to learn. He’s still got improvement to come.

“He was just having a bit of a look going towards the post, but [he] gave me the feel of a nice horse, that’s for sure.

In terms of Hard Landing's future prospects, Stockdale suggested: “I think with racing he’ll definitely get out to the 1200 metres. He relaxed enough today to show he can, and I think with him having a look around late and feeling the pinch late as well, I think the 1200 will suit in future.”

Other than the winner, who shaped-up particularly well on his first outing as a 3-year-old, both placegetters did enough to suggest that they have a good season waiting ahead and can figure in the finish of their next few assignments.