Passage Of Time heads to Civic Stakes after Rosehill win

There will be higher grade assignments for Joe Pride’s Passage Of Time after the Gooree Stud home-bred five-year-old gelding dominated the $125,000, Events By ATC Bm 94 Handicap (1300m) at Rosehill on Saturday for his third win from four starts.

The 1L win was franked by Sam Clipperton taking the initiative to lead all the way with Passage Of Time carrying top-weight of 60kg for the trip. Clipperton was able to look over his shoulder to check the rest with 20m to run and then ease through the line.

As with the first two races of the programme with favourite was rolled with Asterius (Sebring) at $2.30 second with 54.5kg under Jason Collett. Fragonard (New Approach) with 52.5kg under James Innes Jnr was third with the margin 1 1/4L.

“He is a model of consistency and he a real jockey’s dream to ride, he is very push button, a tradesman. He is in great form and even though he has a soft lead he still had to lump the weight,” said Clipperton.

“A small but select field I thought, a competitive race and he put paid to them quite easily.  He is a big, strong customer, I would love to know how much he weighs and that makes if easy for him to lump those weights. He definitely has a good race in him somewhere,” he said,

“At this time of the year if he can get up and do what he is doing he can be a pretty dominate horse through this part of the season. There is the Civic Stakes coming up in a couple of weeks here at 1350m and I would have thought that would be a nice race for him,” said Warwick Farm based Pride.

Pride acknowledged that Saturday’s win was probably the last for Passage Of Time weight wise, hence the step up to the $150,000, listed Civic Stakes (1350m) on June 29th.

Passage Of Time, out of the Marscay mare Crystal Gautlet, was winning for the seventh time and with five placings he has earned a good stake tally of $427,670. 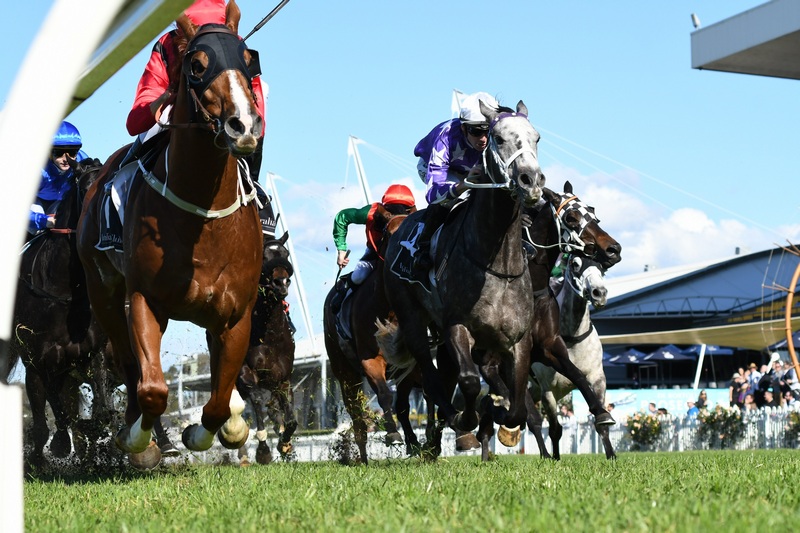 Passage Of Time and Sam Clipperton against the rails. picture Stevehart.com.au