Pakistan Star’s ready to sprint in the Premier Bowl

The enigmatic gelding has not won a race since wowing the Sha Tin crowd with victories in the G1 QEII Cup (2000m) and G1 Champions & Chater Cup (2400m) in the spring of 2018. This weekend, the six-year-old’s new handler Paul O’Sullivan is launching him into a programme which connections hope will take him to glory in December’s G1 LONGINES Hong Kong Sprint (1200m).

“He’s the odd one out to some extent; he’s the exciting one in the race,” jockey Zac Purton said on Friday morning.

Owner Kerm Din’s pride and joy is certainly a leftfield candidate for top sprint honours. The German-bred has not raced at 1200m since his sensational internet-hit last-to-first charge on his career debut back in July 2016; his last race at a distance under a mile was his Griffin Trophy (1400m) win in December of that year.

“Everyone is looking forward to seeing how he’s going to go,” his rider said.

Purton has waited patiently for his first race ride on Pakistan Star (131lb), and, having watched his career closely, and been in the hot seat for the Shamardal gelding’s recent barrier trials, the champion jockey has a good idea of what to expect.

“I’m not going to be in a hurry on him, I’ll let him tell me where he wants to be and ride him where he’s comfortable. It’s a small field and normally they go too slow when it’s a small field - I know what I want and an evenly-run race would be better for everyone,” he said. 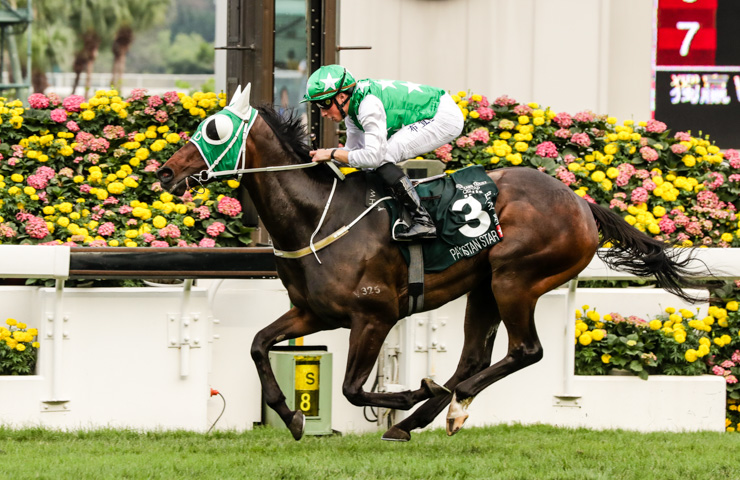 Pakistan Star was an impressive sight when leading home a 1200m barrier trial at Sha Tin 10 days ago. O’Sullivan’s charge galloped with an easy fluidity and cruised past the post in a sharp time of 1m 09.94s - that was on the dirt track though.

“It’s on a different surface to what he’ll be racing on,” Purton observed. “He obviously enjoys a bit of cut in the ground and the firm surface of the grass may be what pulls him up.

“But I think it’s more mental. I think in the trials you’re not asking him for his full effort and mentally he can accept that and is happy to go through his gears. In a race, when you ask him for something and you're trying to urge him he can resent it a little bit. It’s up to him - we know he’s got it but it’s up to him to want to deliver.”

And given the gelding’s back history of stopping in races, Purton is intent on letting Hong Kong’s famous stayer enjoy his shot at being the sprint division’s latest shooting star.

“I’ll just go with him, let him race wherever he wants to be,” he said.

Pakistan Star is set to face seven rivals, including the returning former champion sprinter Ivictory (133lb), and the emerging talent Full Of Beauty (120lb) from the John Size stable.

Chad Schofield will be aboard G2 winner Rattan (132lb) who led the field through the G3 National Day Cup Handicap last time, only to fade out as Full Of Beauty ran on to victory.

“He’s proven he’s better over 1200 (metres), he’s run some terrific races over the distance,” Schofield said. “There was a bit of a question mark over the 1000 (metres) but I think a combination of the track being a bit firm and top-weight meant it was a bit too much for him, but he didn’t get beaten far and he’s taken improvement from the run.

“I worked him on Tuesday morning with a companion and he worked really well with him,”